Nearly a million species of insects, living and extinct, have been scientifically described. These have been placed in thousands of genera, but were grouped into just 31 orders. Now, that number is 32 with the discovery of two 100-million-year-old specimens that are so different from anything we have seen before, they required the creation of a new order.

“This insect has a number of features that just don’t match those of any other insect species that I know,” said Emeritus Professor George Poinar of Oregon State University in a statement. “I had never really seen anything like it. It appears to be unique in the insect world, and after considerable discussion we decided it had to take its place in a new order.” The discovery has been published in Cretaceous Research.

Strange as this pair look, they also seem oddly familiar, appearing to resemble a cross between an ant and the aliens people claim abducted them. “While insects with triangular-shaped heads are common today, the hypotenuse of the triangle is always located at the base of the head and attached to the neck, with the vertex at the apex of the head,” the paper notes.

This creature reversed that, having the hypotenuse of the triangle at the top, with eyes at each corner. The hind legs, at twice the length of the abdomen, are also unusually long.

The two specimens are from the same species, which Poinar named Aethiocarenus burmanicus. It currently represents everything we know of the new order Aethiocarenodea – the species name comes from the fact that A. burmanicus was found in the Hukawng Valley Burmese amber mines, which have become an unmatched treasure trove of Cretaceous fossils.

Like many other amber discoveries, the preservation of A. burmanicus is remarkable, to the extent that Poinar identified glands on its long neck that he thinks released a chemical to ward off predators. The distinctive eyes bulging from the corners of a triangular head would have given it an extraordinarily broad field of vision, further enhanced by its capacity to swing its head at a large angle thanks to its thin neck. 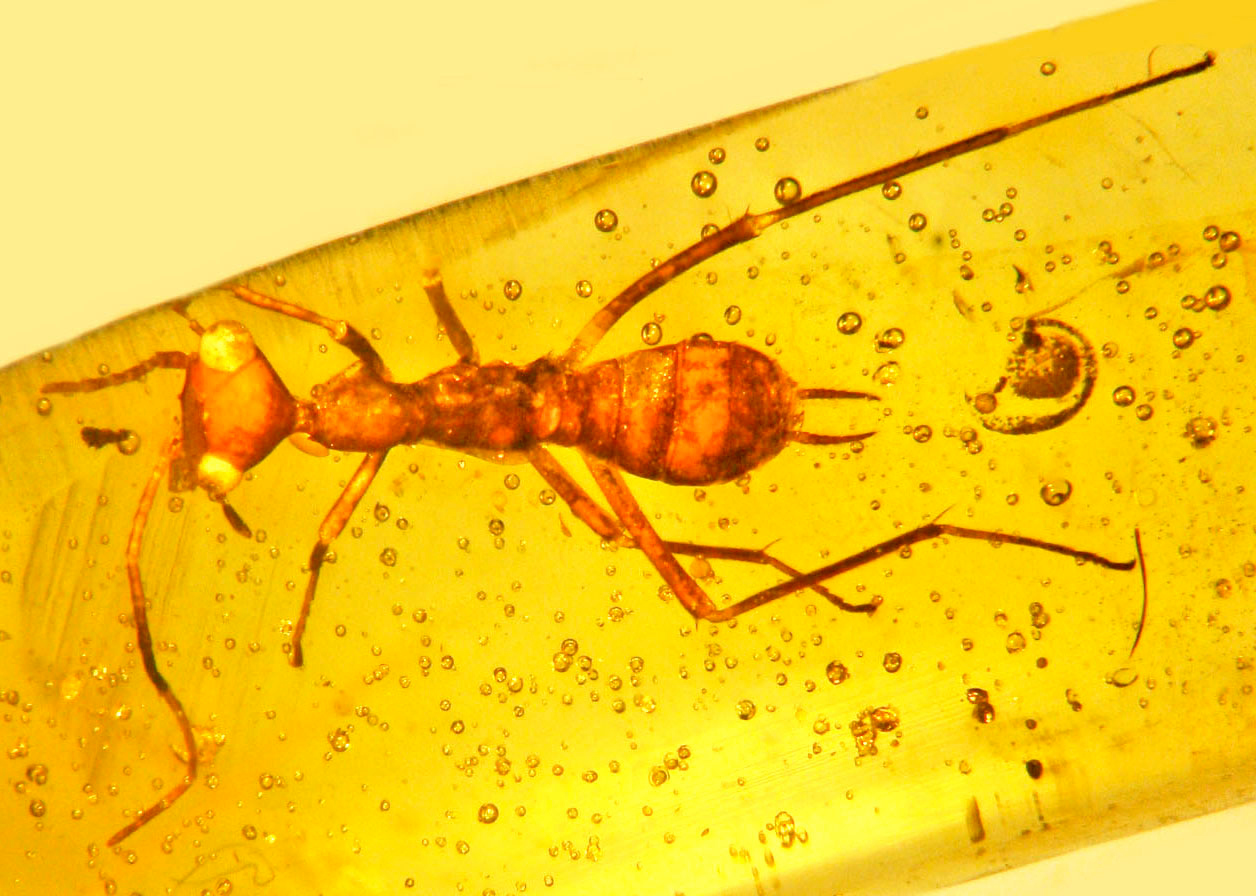 The full body of one of the specimens. George Poinar

We know little about A. burmanicus'  lifestyle, but Poinar suspects it was omnivorous and probably lived in the gaps in the bark of trees, feeding on mites and fungi.

“The strangest thing about this insect is that the head looked so much like the way aliens are often portrayed,” Poinar said. “With its long neck, big eyes and strange oblong head, I thought it resembled E.T. I even made a Halloween mask that resembled the head of this insect. But when I wore the mask when trick-or-treaters came by, it scared the little kids so much I took it off.”