Sometimes you look at the news and it’s all coronavirus this and forest fires that, which can make life seem pretty depressing. But then, just when you need it most, you get a rafting monkey. So to lift the gloom and make life wonderful again, here’s some breaking news about a group of monkeys that sailed from Africa to South America around 35 to 32 million years ago.

The rafting monkey theory gained traction in the 1980s as the best possible explanation for the presence of primates in the Americas. All of those currently found on the continent belong to the Platyrrhine lineage, which originate in Africa but suddenly appear in the American fossil record around 36 million years ago.

With no predecessors in the New World, these pioneering Platyrrhines are thought to have somehow crossed the Atlantic, possibly by inadvertently sailing on a chunk of land that became disconnected from mainland Africa and was swept westward by ocean currents.

Upon arrival, these nautical simians began living the American dream, colonizing the continent and becoming the dominant – and in fact only – primates to live in the Americas until the first humans arrived millions of years later.

At least, that’s what we thought. However, a new study in the journal Science has thrown a whole new cast of characters into the mix, suggesting that a second group of primates may also have tested out their sea legs by making a trans-Atlantic voyage of their own.

The study authors describe the discovery of four fossilized molars along the banks of the Yuruá River in the Peruvian Amazon. The teeth belonged to a primate that was not a Platyrrhine, instead bearing a strong resemblance to those of a now-extinct primate lineage called Parapithecidae. 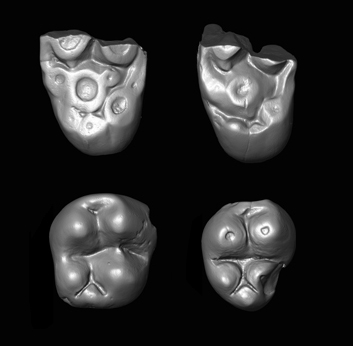 According to the researchers, the teeth exhibited several features that set them apart from New World monkeys, including “bulbous and basally inflated primary cusps, very restricted trigon basins [and] well-developed conules.” These characteristics place the owner of these molars firmly within the Parapithecidae, which lived in North and East Africa until becoming extinct around 11.5 million years ago.

After naming the species Ucayalipithecus perdita and determining that it would have lived between 35 and 32 million years ago, the researchers then turned their attention to the always controversial conundrum of international monkey transport.

While not everyone is convinced by the idea of rafting primates, the study authors point out that there are several reasons to believe that these monkeys did indeed cross the ocean on some sort of floating platform. For one thing, the appearance of U. perdita in the Americas lines up with a drop in sea levels caused by the glaciation of the Antarctic, which could well have made such a crossing easier.

Like the Platyrrhines, this second wave of maritime monkeys would have had to be extremely resilient to survive the crossing, possibly going without food or water for long periods. On top of this, the fact that the fossilized molars were found thousands of kilometers from the Atlantic Coast suggests that the new arrivals must have thrived for a considerable amount of time and spread over much of the continent. This, in turn, indicates a high level of behavioral flexibility, as the monkeys would have been required to adapt their foraging patterns to match their new environment.

In all likelihood, the next article you read will be about coronavirus, which is obviously a major bummer, but never forget that there was once a golden age of monkey rafting, when not one but two groups of primates sailed from Africa to South America.