The pitter-patter of tiny feet is one of my favorite sounds to come home to at the end of a long day.

And I'm convinced that my dog, Izzie, is just as elated to see me as I am to see her.

But what's she really thinking when I open the front door and our eyes meet? Is she simply excited for the dinner I'm about to feed her, or do we have a real bond?

To find out more, we spoke to canine behavioral researcher Julie Hecht and Duke University professor of cognitive neuroscience Brian Hare, who wrote the book "The Genius of Dogs," and hosts a new podcast called DogSmarts.

Here are a few of the recent discoveries that Hecht, Hare, and other scientists have made about dogs: 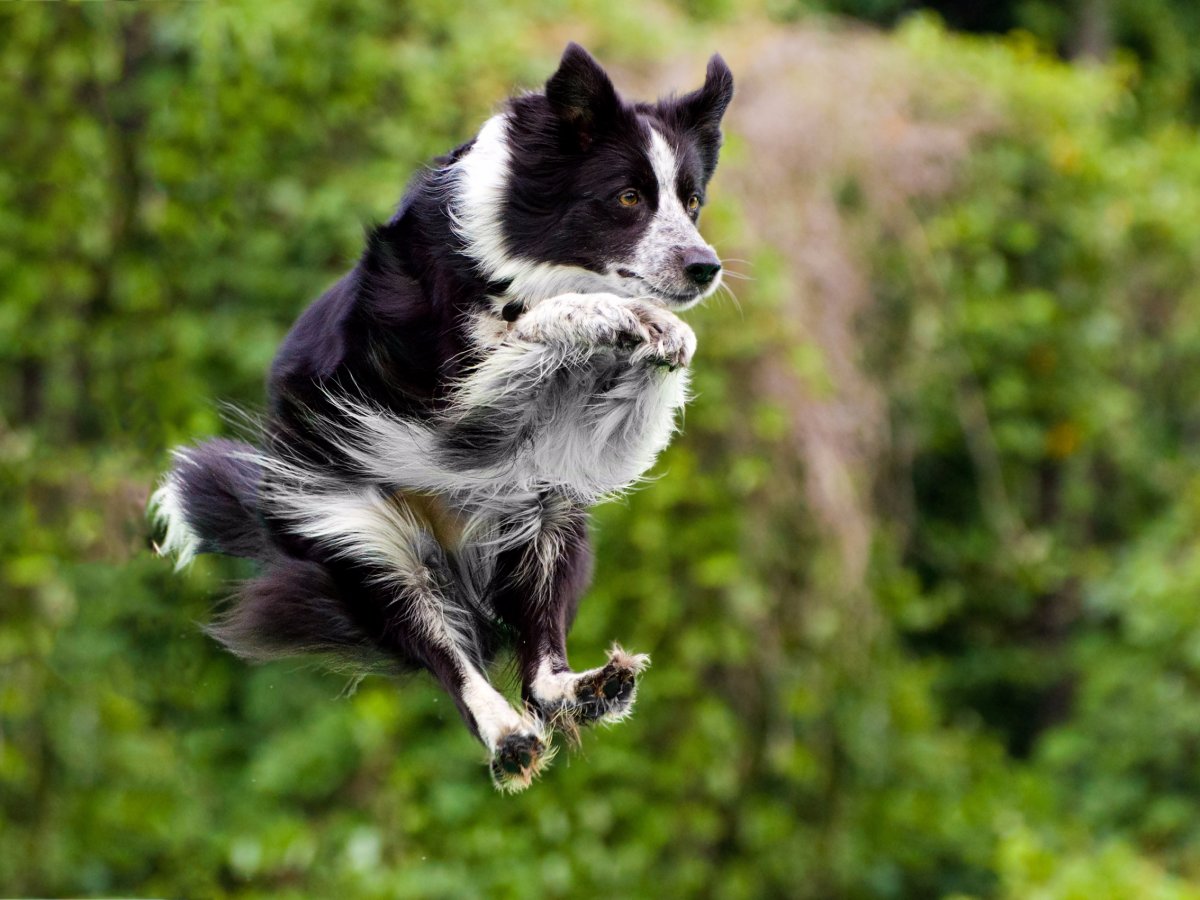 Dogs, like dolphins, apes, and parrots, can learn a series of vocal commands or words. One dog, a border collie named Chaser, learned more than 1,000!

Researchers say Chaser used a process called “fast-mapping,” or inference, which is pretty similar to how human children learn language skills. Basically, it involves guessing the meaning of a word based on the object that is being used in conjunction with that word. So if you're constantly saying "walk" and then fetching your dog's leash and taking him outside, he may be able to infer that the word "walk" has something to do with the action of going for a walk.

2. Why does my dog yawn every time I do? 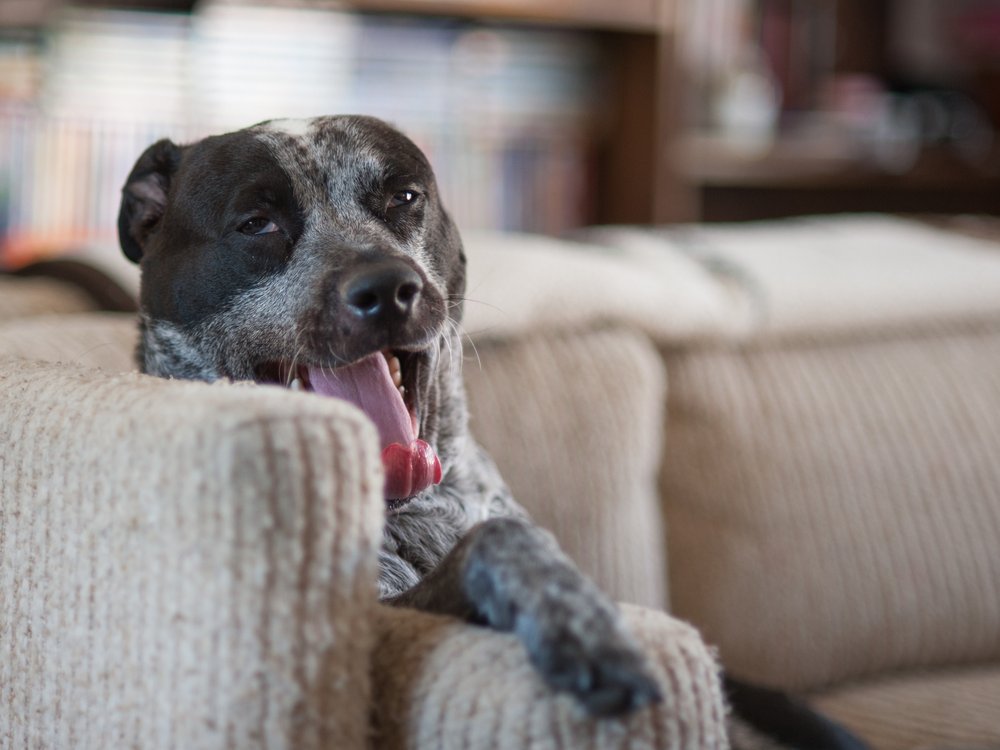 Just like people, dogs can "catch" yawns. A study in the journal Biology Letters says this "emotional contagion" is completely normal. More importantly, the researchers write, your dog catching your yawn is a sign of basic empathy.

Dogs are believed to empathize with us in other ways as well. A University of Helsinki study suggested that dogs can sense when their owners are angry and have even evolved to respond accordingly. Another study found that dogs respond in a similar way, physiologically and behaviorally, to people when they hear a human baby crying.

3. Why do dogs turn away from us when we try to hug them?

A psychologist who studies canine behavior found a disturbing trend in 250 photos of people hugging dogs — the dogs were not happy. How do we know? According to animal behavior researcher Julie Hecht, there are three common signs of stress in dogs: 1) Turning their heads away from the thing that's bothering them; 2) Showing the whites of their eyes; and 3) Lowering or pinning back their ears. Most of the dogs in these photos were showing these signs.

Still, some dogs might tolerate a hug, especially if it comes from someone familiar. In other words, dogs have myriad ways of showing affection, but hugs may not be one of them. If your pup tends to shrug away from your embrace, try patting her head or scratching her tummy instead, advises Hecht. 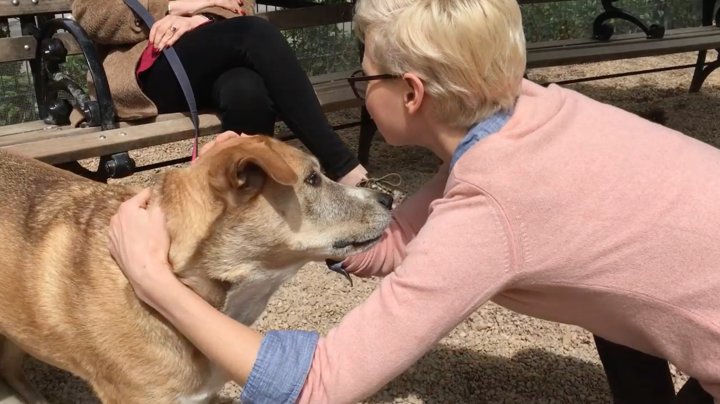 4. Why is my dog having a staring contest with me? 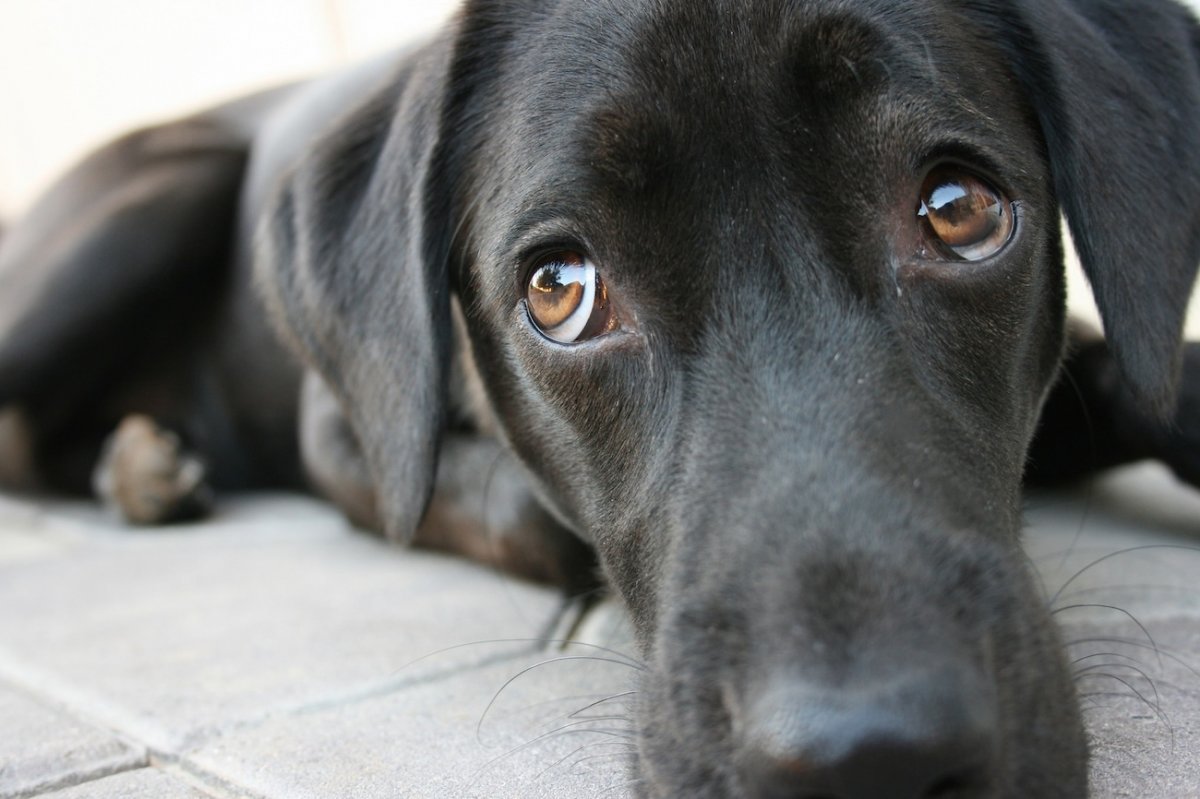 How long your dog looks at you might reveal a surprising amount about how he understands emotions.

Scientists measuring the amount of time horses spend looking at something have suggested that long looks can indicate what researchers call an "expectancy violation," or what Julie Hecht refers to as the "What what?" double-take.

But in dogs, long looks may indicate the opposite — one study found that dogs looked longer at images of dogs where their facial expressions matched the emotional tone of a sound that was played at the same time. In other words, a lingering look may indicate that your dog is processing matching emotional signals that you're giving him, such as a smile and pat on the head.

5. Why won't my dog stop smelling my friends? 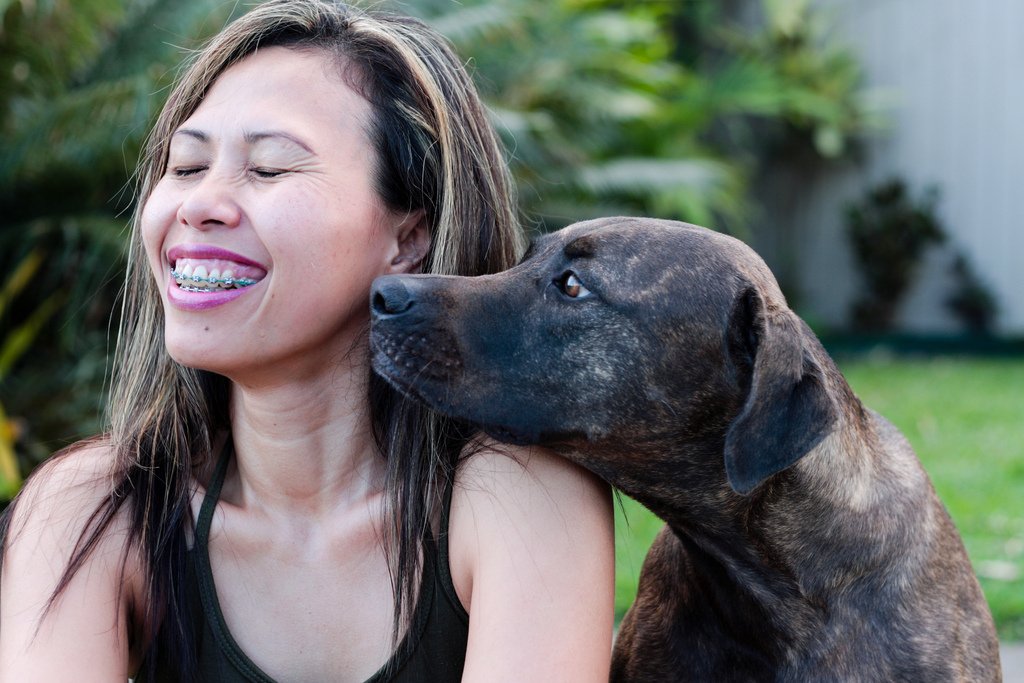 Like other animals, dogs get tons of information about their environment based on what they smell. Beyond that, however, some studies suggest that dogs actually enjoy the smell of their familiar humans like their owners. One recent study, for example, found that when dogs were exposed to the scent of a familiar person, their brains may have interpreted that scent as a reward.

For the study, researchers put dogs into a brain scanner and exposed them to five different smells: themselves, a familiar human, a strange human, a familiar dog, and a strange dog.

When dogs sniffed the familiar person smell, a part of their brains linked with processing rewards showed increased activity — even more so than when they smelled the familiar dog. "This speaks to the power of the dog's sense of smell, and it provides important clues about the importance of humans in dogs’ lives," the researchers wrote in their paper.

6. Why do dogs hide behind peoples' legs? 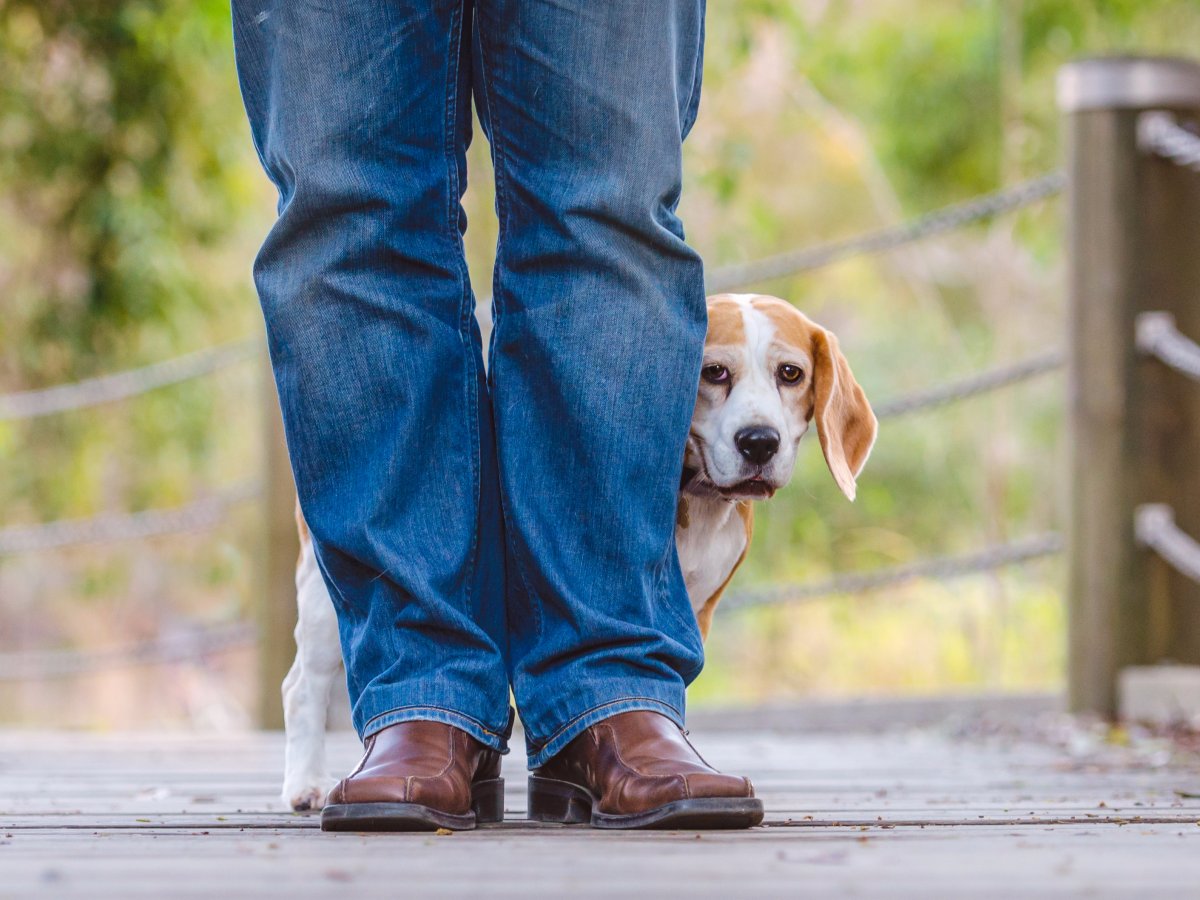 If your dog suddenly scampers behind you only to peek out at whatever is going on outside from behind one of your legs, chances are she's scared.

Remind you of something a toddler might do? Behavioral research suggests that dogs are the only domesticated animals that interact with their humans in a similar manner to the way that human infants interact with their parents. Unlike cats or horses, dogs that are scared or worried will run to their owners for help and comfort, in much the same way a toddler runs to their parents, Theresa Fisher points out for Mic. By contrast, cats and horses simply run and hide. 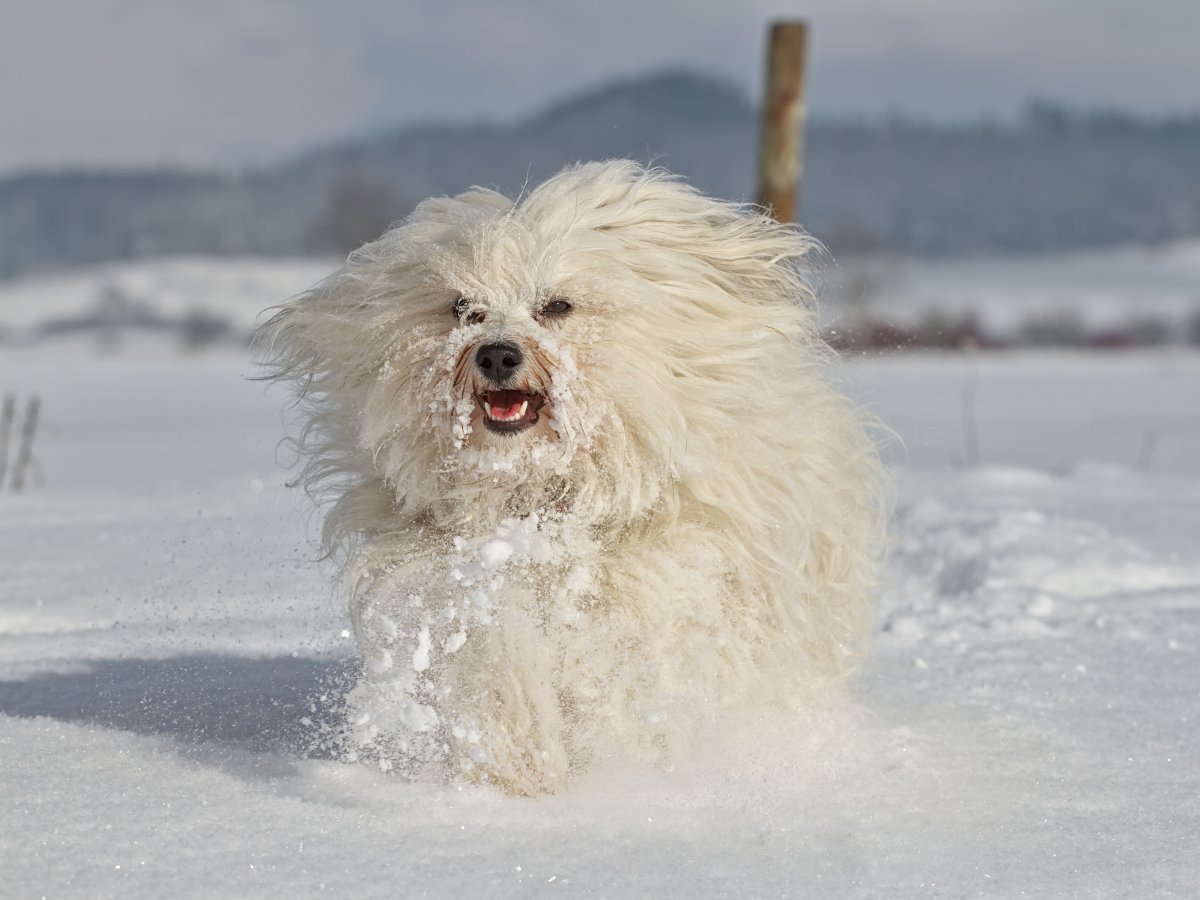 Remember when you were a kid and couldn't wait to jump in piles of fresh, just-fallen snow? Well, when it comes to the powdery white stuff,  "dogs might be a lot like us," writes Hecht.

Gordon Burghardt, a professor of psychology at the University of Tennessee who wrote the book, "The Genesis of Animal Play: Testing the Limits," put it this way to Hecht: "Many animals from temperate areas seem to really enjoy frolicking in the snow. I think it relates to the sensory qualities of snow...when watching dogs in snow we are not too far off in comparing their activity to that which we experienced as young children ourselves."

Read this next from Business Insider: Psychologists say this is the simplest way to get — and stay — happy