The year 2015 didn't just break climatic records, it shattered them, as IFLScience reported over and over again. Global temperatures were unprecedented, and often surpassed previous extremes by unheard of amounts. Yet within a decade, if we don't take action, years like 2015 will be ordinary, and some years will be much, much worse.

When discussing the effects of climate change, activists and science communicators often talk about “the new normal”, a phrase that also appears in some influential scientific papers. But what is normal anyway? Dr Sophie Lewis of the Australian National University searched the literature and found that although there are many references to “the new normal” the term hasn't been defined, and is often used in an ambiguous way.

To address this Lewis created a clear, measurable definition. In the Bulletin of the American Meteorological Society, she writes: “A new normal is defined here as having occurred when more than 50 percent of future anomalies exceed a reference event in magnitude or intensity.” If 2015 is the chosen reference point, it will have become the new normal when half the annual temperatures are higher still.

As Lewis notes, this definition is not limited to global annual averages. A summer heat wave in a particular city can be used as the reference event, allowing predictions of when temperatures will rise to the point that half of all summers will be that hot or hotter.

Having created this useful definition, Lewis tested 11 climate models to see when the devastating heat of 2015 would be the new normal, both globally and at regional levels. The majority of models indicated we will reach this point between 2020 and 2030. All but one have it happening by 2040. With 2016 set to be hotter than its predecessor, we are already well on the way.

Famously, “It's difficult to make predictions, especially about the future.” An outbreak of volcanic eruptions or some unprecedented change to global conditions could alter Lewis' timeline.

However, the major uncertainty is us. Lewis found that so much heat has already been added to the system that, even with drastic action on carbon emissions we probably cannot avoid reaching a point where 2015 conditions are the new normal. However, she found that not only can we delay that grim day, but for many regions we can prevent this outcome entirely, if we are willing to get serious about climate action.

Explaining why the global fate may not apply everywhere, Lewis told IFLScience: “At a regional level natural climate variation is more important than globally. In a single city temperatures might vary 10 degrees from one day to the next, but for the whole of Australia that might be one degree, and for the planet as a whole it would be tiny.”

As important as it is from a scientific viewpoint to consider the averages, Lewis stressed to IFLScience that this was not the whole story. “When a record hot season becomes average it means we will have summers that are much hotter still, and the impacts of those will be severe,” she said. 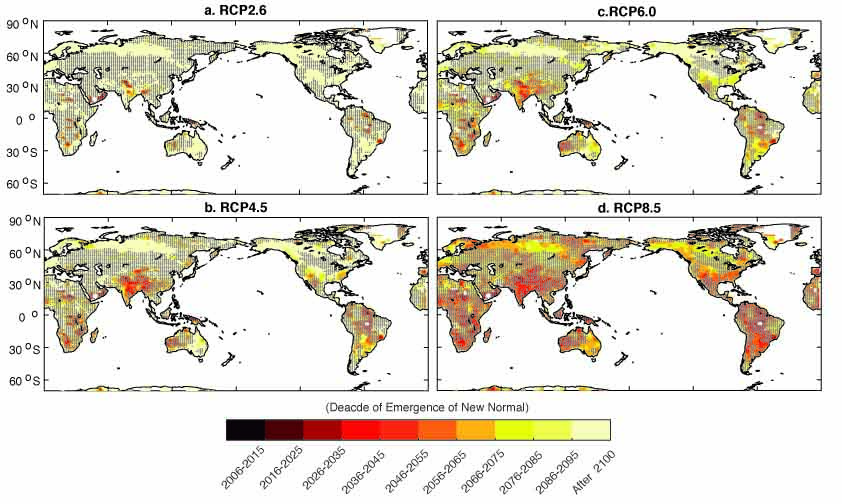 Anticipated dates for regions to hit the point where 2015 is the new normal vary, but many are frighteningly close. Lewis et al/ Bulletin of the American Meteorological Society