On March 8, every year, it’s International Women’s Day – a celebration of the economic, political, and social achievements of women all over the world. As we often like to point out at IFLScience, particularly around this time of year, we should absolutely be applauding the mind-blowing work of women working in science, too.

Without these people – from the great pioneers and pathfinders, to the masters and doctoral students toiling through their tough degrees – the world would be a far worse place than it is today. Today’s a good chance to acknowledge this, but it’s also a good opportunity to review the progress society has made in getting more women into science.

Although there are more women in science, technology, engineering, and mathematics (STEM) than ever before, problems still pervade. From the recruiting bias against women to the fact that many with STEM degrees never end up in a STEM occupation, there’s a great deal more we can all do to help climb this unfortunate mountain.

Let’s just have a quick look at the statistics for the US, the most powerful nation on Earth and certainly the richest. Although there are plenty of congressional representatives there keen on getting more women into STEM, the Land of the Free currently has a massive problem in this regard. 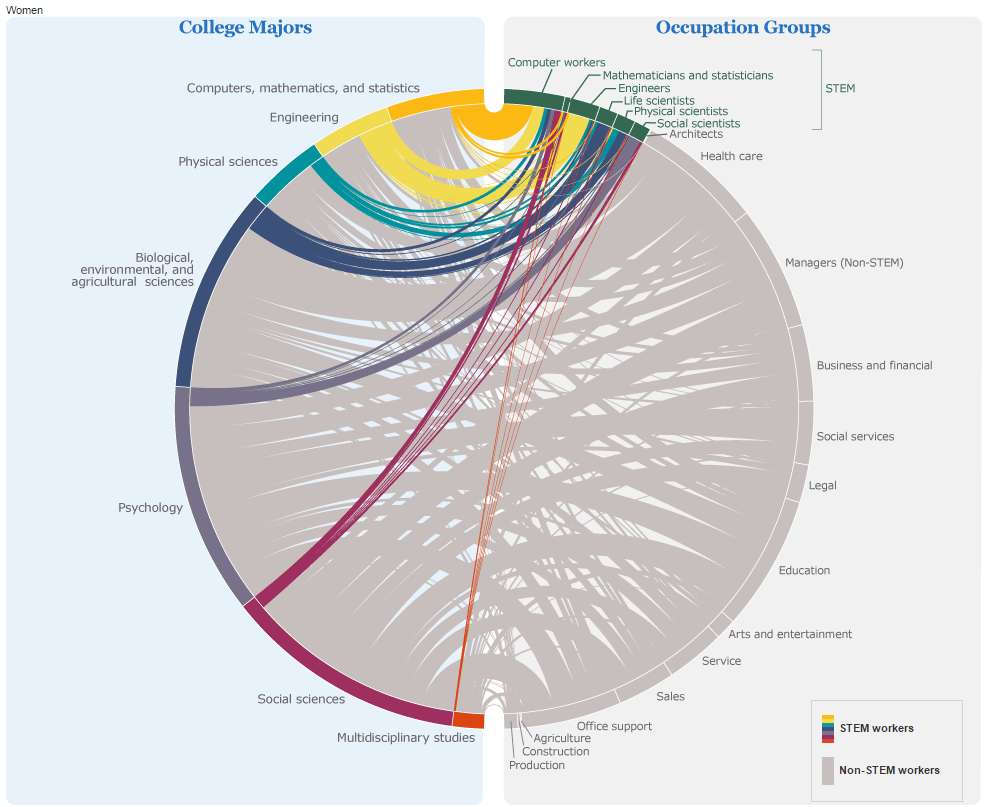 The state of women with STEM degrees in the US, as of 2012. US Census

However, just 1 in 4 men with STEM degrees go into STEM careers today. This is unfortunate enough, but 1 in 7 women fall for the same fate – another clear example of there not being enough paths to a career in science for both men and women, and a striking showcase of how underrepresented women are in science.

The UK fares just as badly. As of 2015, women make up no more than 18 percent of the STEM workforce, up by just 0.2 points since 2012. Just 9 percent of the British workforce are female engineering workers, and only 6 percent of qualified engineers are women.

Diversity of women in STEM is also a massive problem. In the US, back in 2013, 70 percent of STEM job holders were white. Minority women held fewer than 1 in 10 jobs as employed scientists or engineers.

Yes, there aren’t many jobs in academia going at the moment. Funding in academia is a notoriously troublesome issue, and it’s set to fall quite dramatically in the US under the new Trump administration.

But this problem of underrepresentation has existed long before this was a factor. If you have so many women graduating with STEM degrees, you should have far more women in STEM jobs. So where are they all?

Women face an uphill struggle in many respects compared to men. Just as an example, the gender pay gap won’t close completely until the year 2186 at the current rate, and there are plenty of men (and women) in power trying very hard to convince the world that women aren’t strong or smart enough to deserve equal pay.

Women face plenty of prejudices when it comes to science too. The seemingly endemic problem of harassment and sexism of women in the workplace also includes STEM jobs. There is a well-documented bias against hiring women over men across a wide range of careers, and STEM is no exception.

One study revealed that both male and female employers were twice as likely to hire men over women regardless of background. Another computer science-related study found that, when coding anonymously for review, women were often seen as better than their male counterparts. However, when the sex of the coders were made public, men were suddenly seen as being more competent.

Even in STEM careers, men cite themselves and their own work way more than women do, and analyses suggest that this is because it’s socially acceptable for men to be ambitious, but women seen doing the same are considered to be threatening in some way. Go figure. 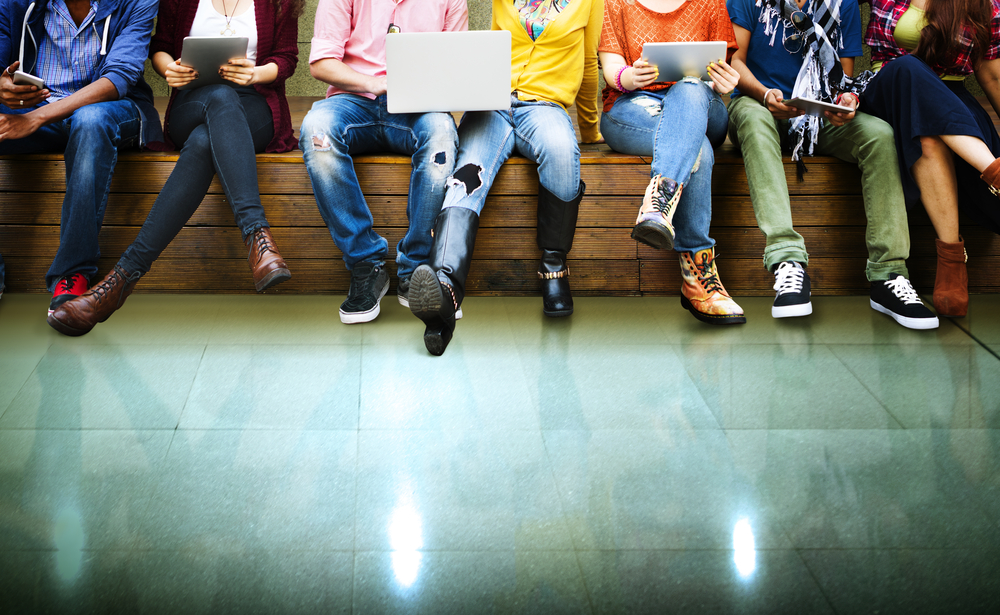 Women being recruited into STEM degrees is on the up, but there's a long, long way to go yet. Rawpixel.com/Shutterstock

Consequently, female first or co-authorship of academic papers has gone down. It increased from 27 to 37 percent from 1994 to 2014, but ever since, it has plateaued, and even begun to decline in many journals. The largest step-change occurs at the post-doc level, where plenty of men persevere but a huge number of women drop out.

“We need to think about ways to dismantle the structural practices that prevent women from staying in science,” Aimee Eckert, a doctoral student in cell biology at the University of Sussex, told IFLScience.

“A friend of mine is a PhD student and a single mother. She's brilliant and would make a great lab leader one day,” Eckert said. “But she will be penalized in academia for staying in one city or even in the UK because of the pressure to work in different environments to climb the career ladder.”

Noting that there are “too many qualified women getting neglected” for talks, public seminars, and panel discussions, Eckert said that she’d “like to see more practices that don't label women as ‘the other’ in science, as opposed to men being the norm.”

Even from a young age, girls are taught in many parts of the world that STEM jobs are boys’ jobs, not anyone’s. This is despite the fact that boys and girls perform equally well in STEM subjects in terms of standardized testing results, all other things considered equal.

This may be part of the reason why many of them decide not to study in a STEM field at all.

UK government data shows that back in 2013-2014, 52 percent of male undergraduates were on a STEM course at university, compared to just 40 percent of women. Just 20 percent of A-level (optional, advanced high school final exams) physics students are female, and this statistic has remained steady for the last quarter-century.

Computer science degrees, which are becoming increasingly important to the well-being of nations these days, are dominated by men. Just 18 percent of US computer science graduates are women.

In the US, a 2015 report shows that both men and women were slightly more likely to be taking STEM degrees than they were a decade ago. This sounds good, but there’s a caveat: The share of STEM degrees has gone down for women over the last 10 years as men are taking a bigger slice of the pie here. So as men rocket forwards in STEM, women are falling behind.

Remember that this is just a handful of wealthy nations we’re talking about here. In much of the developing world, women don’t even have access to higher education. For the first time in history, just this year, there are as many girls as boys in primary education – a great achievement, but one that highlights how far we have yet to come.

Let’s All Look On The Bright Side

There are some positive signs of change afoot, however. It is true that there are more women in STEM than ever before, and they are dominating the fields of anthropology, archaeology, forensics, pharmacology, zoology, and psychology, to name but a few. In important, public ways, women in STEM occupations are being promoted a lot more than they used to.

One study revealed that the gender bias may be switching sides in some senses, with one study concluding that male and female employers are more likely to hire women for professorial roles in psychology, engineering, and biology than equally qualified male counterparts.

Obviously, people should be hired based on their expertise alone, but it’s demonstrably clear that there’s an enormous problem here with women in STEM. It’s a complicated issue, but one that has a rather straightforward solution: Treat men and women the same when it comes to science – and everything else, come to think of it.

Lest we forget – young girls love science just as much as young boys. Despite everything going against them, some of them manage to get into a STEM field. It’s hardly the end of the fight at this point, though.

“Ever since I was a little girl, I knew I wanted to become a paleontologist,” Franzi Sattler, a palaeontologist specializing in evolutionary biology and biodiversity from the Free University of Berlin, told IFLScience. “I didn't even know the word for it (‘dinosaur woman’ never failed to confuse my parents), but I was sure that this is what I was born to do.”

Sattler has worked with Tristan, one of the world’s best-preserved T. rex specimens. Although she says that there are “a lot of amazing women of all ages” that are “proud to support each other” in the paleontological community, she still “feels the pressure of being a woman in a still male-dominated field a lot sometimes.”

“I constantly have the feeling that people expect me to get married, start a family and drop everything that I have worked for,” Sattler adds. “Stable positions and guaranteed funding would be one way to make academia more desirable for young female researchers.”

Be Bold For Change

The theme of 2017’s International Women’s Day is “Be Bold For Change.” It’s ridiculous that asking for a level playing field for both men and women is considered “bold”, but here we are, in 2017, still wondering when this’ll be achieved.

If you’d like to see more done to help boost the support and recruitment of women in STEM, then there are several things you can do.

Sign up here to campaign for women’s education as part of International Women’s Day. Become a STEM Ambassador in the UK or the US, or donate to one of these absolutely amazing charities that help get girls and women into science. March alongside them, and stand up for science.

And, if you know a woman in STEM, take some time to let them know how awesome they are. By merely studying a STEM subject, they are going against society’s tide.

In this sense, any women involved in STEM – whether they are an elderly researcher or a little girl standing up for science – are pioneers, and they deserve not just our applause, but action, to change things for the better.