Bears and wolves are both apex predators, but when they live alongside each other, the canines often play second fiddle. It has long been suspected that as bears chase wolves off their kills and feed on the free meal, the wolves have to compensate for the loss of food by going on the hunt again. But paradoxically, researchers have actually found the opposite.

Studying populations in both Yellowstone National Park in the US and Scandinavia, two areas where wolves and bears both coexist, they found that the canines are actually hunting less in the presence of bears. This seemingly bizarre turnaround goes against what the evidence from other apex predators living with bears shows. Lynx and mountain lions, who are also the unfortunate victims of the larger predator elbowing them out of the way, have been found to step up their hunting game as a direct result.

“Wolves and brown bears coexist across most of their range,” explained Amiee Tallian, who co-authored the study published in the Proceedings of the Royal Society B. “Although competition between predators such as these is widespread in nature, we know little about how brown bears affect wolf predation.” 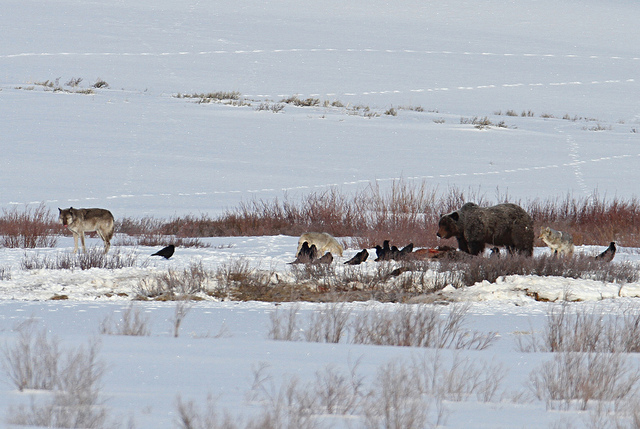 The reasons behind the drop in hunting from the wolves, though, is a little harder to discern. One explanation could be that as the wolves kill large animals like moose in winter, there is enough meat left on the carcass once the bears are done to justify the pack hanging around and waiting, rather than going off to find another moose to kill.

It could also be down to the fact that where bears and wolves live together, prey is simply harder to find as they both hunt similar prey. “We think this may be the case, in the spring, when newborn ungulates make easy pickings for bears,” said Tallian. “It may simply take more time for wolves to find calves, when there are fewer of them.”

Often the interactions of wildlife can have surprising and unforeseen effects on both other animals and habitat. The classic example also emerged from the wilds of Yellowstone, with the incredible discovery that the reintroduction of wolves actually altered the course of rivers. It was found that as the number of wolves in the national park increased, the deer they prey on were spending less time grazing in the tree saplings surrounding rivers, allowing them to mature and form forests. This stabilized the banks, meaning the rivers meandered less.