A new image of the Sun shows a rather strange occurrence – there are no visible features on the surface, indicating very little activity. Rather than signaling the end of times, though, this highlights a regular process taking place on our Solar System’s star.

The Sun goes through cycles of activity lasting 11 years, moving from a solar maximum to a solar minimum. During a maximum, the Sun is at its most active, with sunspots – dark areas of magnetic activity – occurring frequently across the surface, several hundred per year. Often, these can be accompanied by bursts of material called coronal mass ejections (CMEs). The exact cause of solar cycles is not fully understood.

During a solar minimum, the amount of activity drops dramatically. And, in some instances, the Sun can be devoid of any noticeable features at all. That’s the case in this latest image, taken on June 4 by NASA’s Solar Dynamics Observatory (SDO). As highlighted by meteorologist Paul Dorian at Vencore Weather, this was part of a quiet spell that lasted for about four days. This suggests we are heading towards the next solar minimum, predicted to take place around 2020.

“The blank sun is a sign that the next solar minimum is approaching and there will be an increasing number of spotless days over the next few years,” writes Dorian. “At first, the blankness will stretch for just a few days at a time, then it’ll continue for weeks at a time, and finally it should last for months at a time when the sunspot cycle reaches its nadir.” 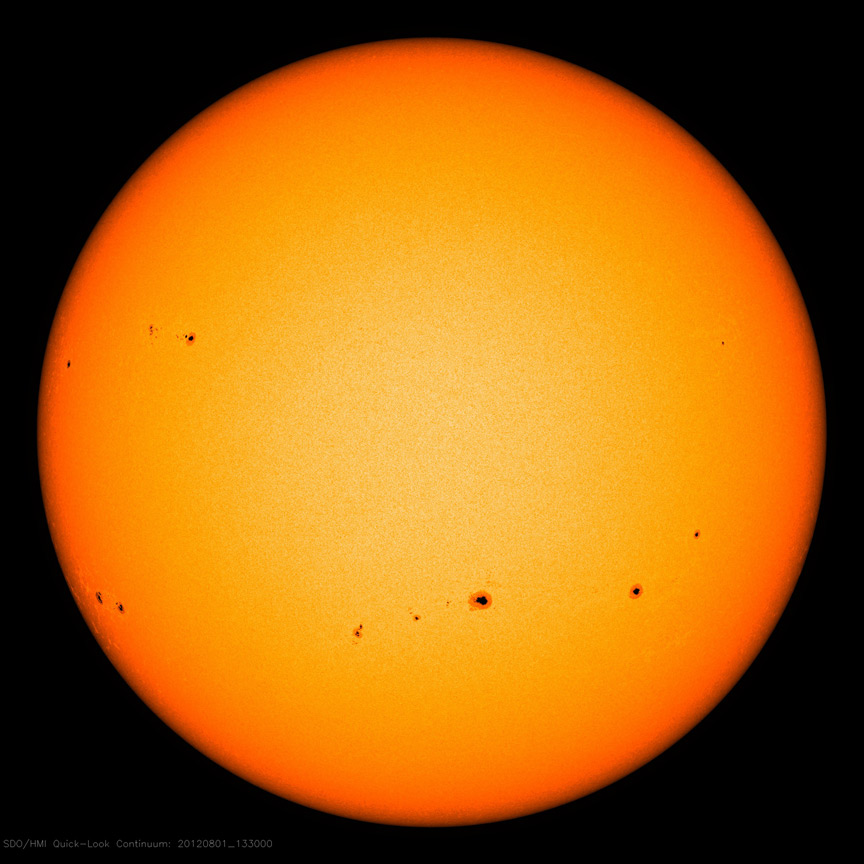 Here's what the Sun looks like with sunspots on the surface, taken from July 24 to August 1, 2012. NASA/SDO/HMI

This cycle is called Solar Cycle 24, being the 24th observed since sunspot activity was first recorded in 1755. Dorian also said this is the weakest cycle in more than a century, since Solar Cycle 14 in 1906.

In this 24th cycle, solar maximum was reached in April 2014, and the next maximum is not expected until the 2020s. Despite some claims to the contrary, though, this solar minimum is very natural – and it’s not about to cause a “mini ice age”. Perhaps the most noticeable change during a solar minimum is an increase in cosmic rays making their way to Earth.

During high activity, the Sun usually protects Earth from cosmic rays – originating from things like supernovas – thanks to its solar storms. But during lesser activity, cosmic rays can more easily enter the Solar System, and could pose a threat to the health of astronauts.

At any rate, we’ve survived solar cycles before, and this one will be no different. Still, this latest picture is pretty interesting to look at.