South Africa is home to a magnificent World Heritage Site, the Cradle of Humankind, which continues to yield fascinating and surprising stories of our origins and evolutionary history.

Not exactly bestowed the catchiest or most memorable name, but TM 1511 was a huge deal. Discovered in 1936 by doctor and paleontologist Robert Broom, this was only the second Australopithecus to have been discovered. We now know australopiths were bipedal hominins – a group comprising humans and our immediate ancestors – but coming to that conclusion was not easy. 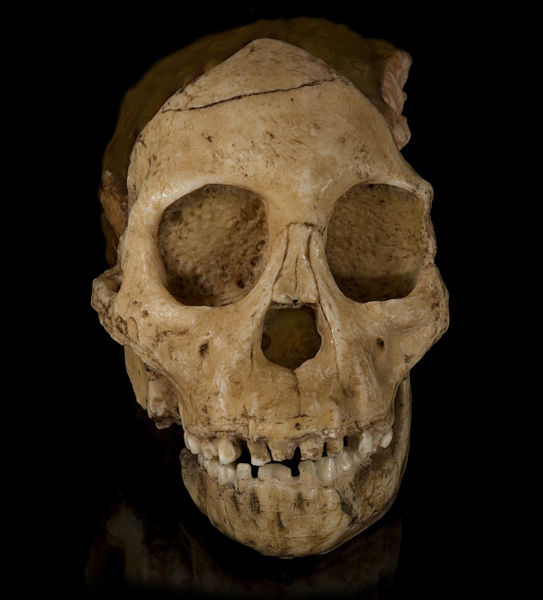 Until the discovery of TM 1511, which was the first adult Australopithecus, the only other specimen paleontologists had was the Taung Child (A. africanus, pictured to the right), a controversial skull discovered a decade earlier by anatomist Raymond Dart. Although this bore the telltale signs of bipedalism – a spinal cord hole positioned lower down than in quadrupeds like chimps – it was dismissed as any old ape, certainly not one of our ancestors, and largely ignored by the scientific community. This was in part due to the widely held belief that humans originated in Europe or Asia, not Africa.

Additionally, Dart struggled to persuade the significance of his find considering all he had was a child’s skull, belonging to an individual of approximately three years of age. Finding the first adult “ape-man” specimen – consisting of merely a natural brain cast in rock – in Sterkfontein lent weight to Dart’s assertions.

A Different Kind Of Ape-Man

Broom’s discoveries were certainly not limited to the one aforementioned adult australopith. He actually discovered plenty of Australopithecus fossils, but a jaw fragment he happened upon in 1938 didn’t quite match up to any of his previous finds. I use the term happened upon because it was not actually Broom who found the fossil; it was a schoolboy playing on a hillside.

After piecing together further bits and pieces from the site of Kromdraai, Broom had enough convincing evidence that this species was in fact distinct from A. africanus, and he named it Paranthropus robustus. While Paranthropus was not a direct ancestor of humans, it was an ancient cousin.

Proving to be a gift that keeps on giving, a decade later the Cradle of Humankind churned out another remarkable fossil: Mrs Ples. Discovered once again by Broom, alongside colleague John Robinson, Mrs Ples is a remarkably complete hominin skull. Initially identified as an elderly female belonging to the species Plesianthropus transvaalensis, the specimen was later classified as a member of the same species to which the Taung Child belongs, A. africanus.

Mrs Ples, which could actually be a male (the jury’s still out on that one) was a small-brained biped of approximately 2.1 million years of age, representing one of the youngest A. africanus specimens. Once again, this discovery offered credence to the theory that humans originated in Africa.

You’ve surely heard of Little Foot, but let me refresh your memory.

Fast-forwarding to the 1990s, paleoanthropologist Ron Clarke was busy picking his way through a collection of animal bones gathered in the Sterkfontein caves when he came across four that didn’t seem to match up with the rest. Distinctly human-like foot bones, and small ones at that, Clarke assembled a team and went back to their place of discovery to find the rest.

It took years, but persistence paid off, and eventually the owner of these four tiny foot bones was discovered, hence “Little Foot.” Because Little Foot, another australopith, was so deeply entombed in rock, it took 15 years of chiseling to recover the fossil, but it was well worth the effort. The specimen was represented by more than 90% of its bones, making it the most complete early human recovered to date. Not only that, but it may rival the famous Lucy in age.

It’s believed that Sterkfontein became Little Foot’s final resting place after he fell through a hole, meeting his untimely demise. King Louie would be envious of this one. Whatever was residing in Swartkrans a million years ago was likely able to use fire. And we’re not talking about accidentally starting a fire and scrambling around joyfully; we mean using it in a controlled manner.

Scientists analyzed charred bones recovered from this area and found that they had been heated to temperatures that were too high to be the result of a bush or forest fire. The temperatures were high enough to suggest that the flames came from a fireplace, which could suggest these ancient residents were cooking with the use of fire.

Although researchers aren’t sure what species may have made this achievement, there is evidence that at one time, Swartkrans was inhabited by two lineages: Homo erectus and Paranthropus robustus. This was also the first example of a hominin co-existence. There are plenty more fascinating discoveries from the area if you’re interested, but we unfortunately can’t list them all here. And as one of the richest hominin fossil sites in the world, who knows what other exciting finds await? Watch this space.