The Earth isn’t flat. This presumably doesn’t come as news to you, and why should it? Earth’s roughly spherical nature has been known about since the time of the Ancient Greeks. It’s bewildering, then, to see various "celebrities" declaring online that Earth is indeed flat, claiming that NASA has been keeping this secret from us for decades. So what exactly is going on here?

Most recently, B.o.B, an American rapper, has effused a series of utterly ridiculous claims on Twitter. Although he began with talk of human cloning centers, he quickly turned his focus to the idea that we are all resting on a relatively two-dimensional world drifting through space like a cosmic Frisbee. Famed astrophysicist and science communicator Neil deGrasse Tyson was quick to respond.

At present, the two are engaged in a rap battle for either side, which should give you some insight as to how absurd the entire conversation is. While it's pretty effortless to prove Earth isn’t flat, that hasn’t stopped madcap conspiracy theories cropping up – B.o.B is just another peon in the ranks of the International Flat Earth Society.

The Draw of Conspiracy Theories 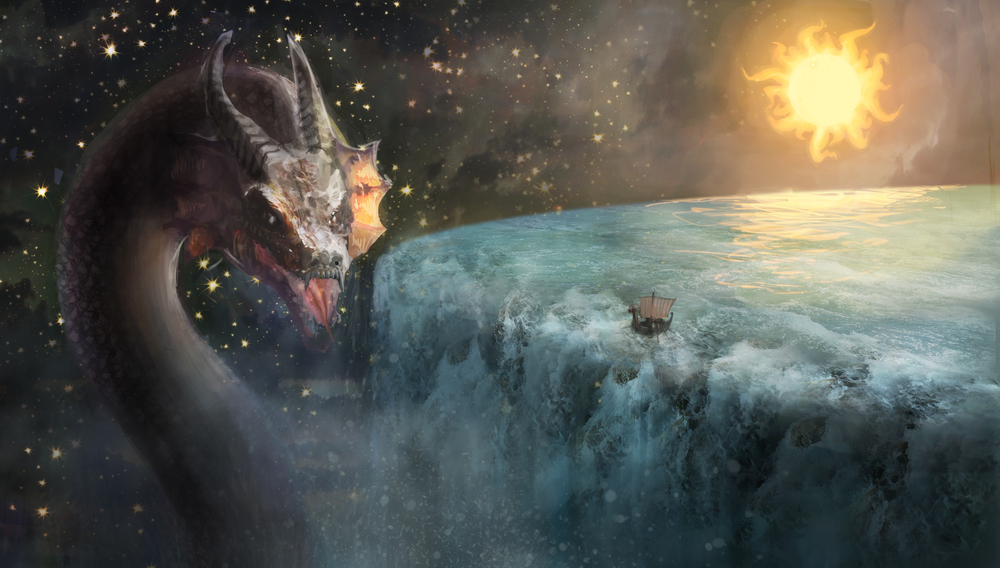 Norse mythology often spoke of the edge of the world. Vuk Kostic/Shutterstock

This organization, founded in the 19th century, claims to know the “truth” about our planet, and regards scientists as witch doctors pulling off a gigantic hoax. In 2010, its president said that he accepts the science of both man-made climate change and evolution, but when it comes to Earth, he’s convinced it’s flat.

The society’s members, who also believe that the Sun and Moon are just 4,800 kilometers (3,000 miles) above us, have never quite explained the motives behind a huge conspiracy theory to hide the fact that Earth is flat. Who would benefit from such a comprehensive cover-up?

People are drawn to conspiracy theories, though, and the Internet has only helped to accelerate their spread. They give certain people a sense of security, control and comfort that they haven’t found in the natural world around them. By only conversing with others that agree with them in “echo chambers,” any opposing views are filtered out, and they become increasingly entrenched in their own views. Perhaps this is what drives contemporary Flat Earthers.

Today, NASA and other space agencies have built up a beautiful library of images of Earth, clearly showing that it is round – or technically a bumpy spheroid, an uneven sphere with a bulge at its Equator. Naturally, Flat Earthers always assume that these images are photoshopped. Fortunately, there are plenty of other ways to demonstrate the Earth’s sphericalness.

A Greek astronomer by the name of Eratosthenes clearly showed Earth was round just over 2,000 years ago. He realized that rays of sunlight are hitting Earth at the same degree, but because Earth has a curvature, the length of shadows at different locations across Earth aren’t the same.

By calculating this shadow length change between two cities – Alexandria and Syene – he gave an estimate for the circumference of the Earth: 46,620 kilometers (28,970 miles), which is only 16 percent larger than the actual value.

Flat Earthers often say that access to Antarctica is restricted for our own safety; if we crossed over this icy ring around the edge of the flat disk, we’d fall off into space. Of course, humanity has circumnavigated the globe plenty of times, and no-one’s fallen off into infinite darkness just yet.

If you look up into the sky and spot a star, you can track its position every night. If you then begin to move forwards towards the horizon, you’ll notice the star appearing further behind you each and every night. If Earth was flat, you’d be able to always see it. SInce Earth is round, this star will eventually sink and disappear below the horizon.

A lunar eclipse shows the curved edges of the Earth. NASA/Rami Daud

All planets in our Solar System – and the thousands of exoplanets we’ve discovered far beyond our little corner of the galaxy – are roughly spherical. It’s a fundamental feature of physics; celestial bodies of a significant mass are spherical due to the effect of gravity, which acts in all directions to pull objects towards the center of mass.

And if any more proof was needed, we also have seasons and ice ages. The amount of sunlight hitting parts of the planet changes from season to season, from icehouse world to greenhouse world, and this is entirely dependent on the degree of tilt a spherical Earth has with respect to the Sun.

Ultimately, it is probably due to the fact that it is so self-evident that Earth is not flat that people are talking so much about B.o.B’s recent epiphany. That, and the fact that Neil deGrasse Tyson responded using the medium of rap.