It looks like Sagittarius A*, the supermassive black hole at the center of the Milky Way, has been on a bit of a diet lately. Astronomers have estimated that its last meal was 6 millions years ago.

This estimate, performed with the use of the Hubble Space Telescope, was possible by tracing the movement of cold gas within the Fermi Bubbles, the two large bubbles of hot plasma released by the black hole after its last meal. It’s a cosmic burp that weighs the equivalent of millions of Suns.

The researchers used the ultraviolet light of distance quasars to learn more about the northern gas bubble, such as its speed, composition, and temperature of the gas. It would be impossible to do this from the ground as most of the UV radiation is blocked by the ozone layer.

"For the first time, we have traced the motion of cool gas throughout one of the bubbles, which allowed us to map the velocity of the gas and calculate when the bubbles formed," lead researcher Rongmon Bordoloi of the Massachusetts Institute of Technology said in a statement. "What we find is that a very strong, energetic event happened 6 million to 9 million years ago. It may have been a cloud of gas flowing into the black hole, which fired off jets of matter, forming the twin lobes of hot gas seen in X-ray and gamma-ray observations. Ever since then, the black hole has just been eating snacks."

The paper, published in the Astrophysical Journal, states that the mass of the cool gas is equivalent to 2 million Suns and has a temperature of about 9,800°C (17,700°F). Although that’s very hot by our standards, it is quite cold compared to the super-hot gas in the outflows that’s millions of degrees in temperature. It has a velocity between 1,000-1,300 kilometers per second (about 2 million miles per hour) and the northern bubble extends 23,000 light-years above the Milky Way disk.

"We have traced the outflows of other galaxies, but we have never been able to actually map the motion of the gas," Bordoloi said. "The only reason we could do it here is because we are inside the Milky Way. This vantage point gives us a front-row seat to map out the kinematic structure of the Milky Way outflow."

These outflows are very important when it comes to understanding galaxy evolution. The growth of galaxies and supermassive black holes goes hand in hand, and the Fermi Bubbles in particular shine a light on the mysterious past of the Milky Way. 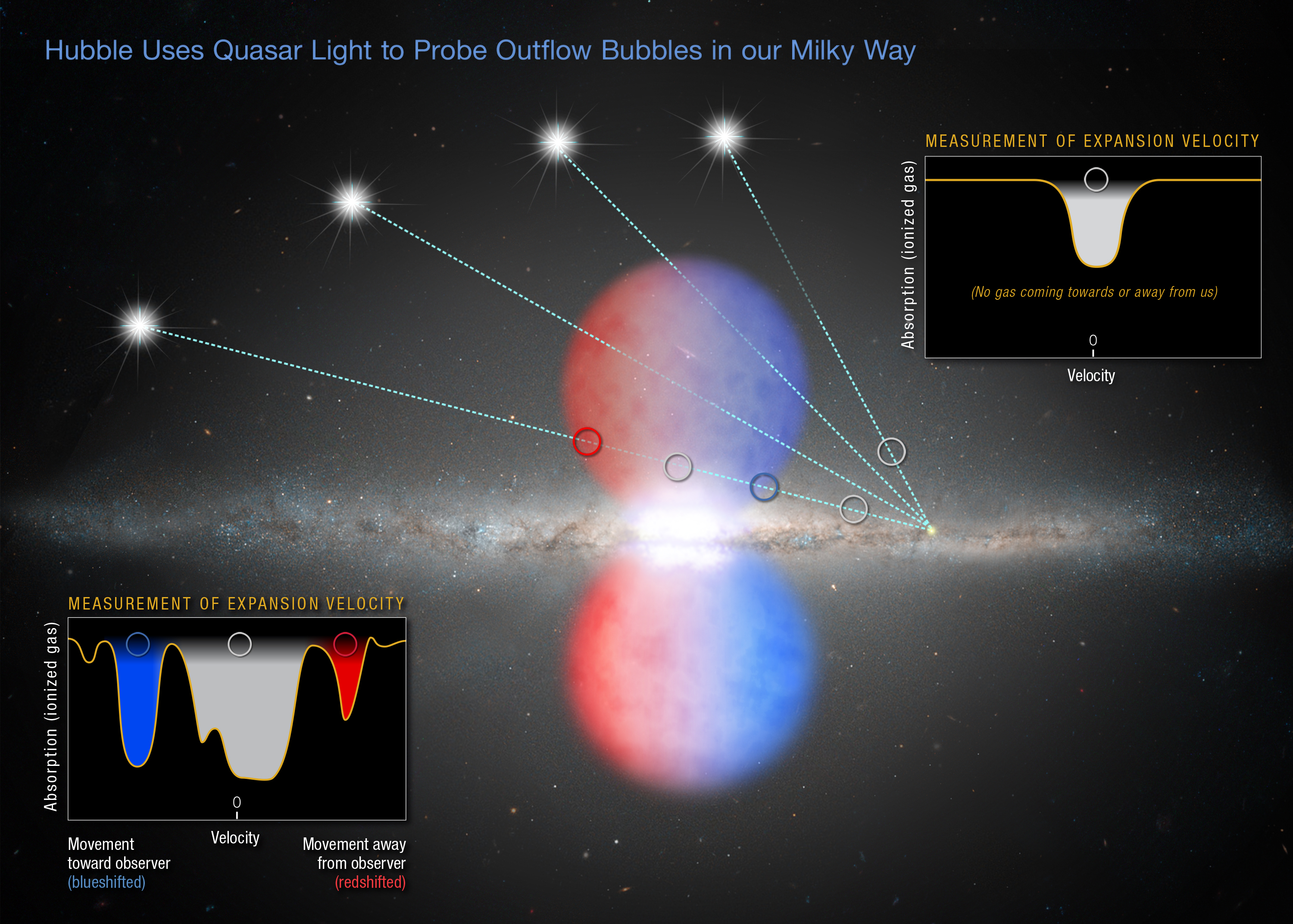 The researchers used the light from quasars to work out how far the gas has expanded. NASA, ESA, and Z. Levy (STScI)