Since assembly of the International Space Station (ISS) began in 1998, it has grown into a mammoth football pitch-sized orbital outpost. While its size is impressive, it also makes it a big target for the numerous pieces of space debris in orbit. So how do we protect against them, and what happens if it gets hit?

Earth orbit is a busy place, with thousands of objects measuring more than a few centimeters across swinging around Earth, and millions of smaller bits around the size of flecks of paint. Inevitably, the ISS gets hit by micrometeoroids now and again, but fortunately, there are measures in place to ensure nothing catastrophic ever occurs.

Some of the most notable impact events include an incident in 2012, when a small meteorite struck a window on the station’s Cupola module. An emergency shutter was automatically pulled over the window, to prevent any loss of pressure to the vacuum of space in the event of a leak, but the damage was not serious and no leak was found, so the shutter was later removed.

In 2013, astronauts noticed another impact on the ISS. One of its solar arrays had a very small bullet-sized hole, caused by an unknown piece of debris in the station’s history. “Glad it missed the hull,” the station’s then commander, Canadian Chris Hadfield, tweeted at the time.

The station’s hull is reinforced against impacts, and is able to absorb micrometeoroids measuring up to 1 centimeter (0.4 inches) in diameter. If a larger one hit, it would run the risk of piercing the hull, causing the station to depressurize.

To prevent this occurring, the station has a protective zone measuring a few kilometers around it, monitored by the US Space Surveillance Network. If any large debris is detected that will enter this zone, the station is moved using onboard gyroscopes and thrusters to get out of the way.

“The ISS will normally maneuver away from the object if the chance of a collision exceeds 1 in 10,000,” NASA Public Affairs Officer Daniel Huot told IFLScience. “It typically happens about once a year [although no such maneuvers were done in 2016]. There have been 23 debris avoidance maneuvers in the station’s history.”

The system isn’t flawless, though. On occasion, an object will be seen too late to give the ISS time to maneuver away. In this scenario, the crew are commanded to evacuate into their Soyuz spacecraft, which act as lifeboats.

If the ISS was hit, and the station could not be saved, the crew would be ordered to undock and return to Earth. At any one time there are up to six people on the station, with three able to travel in each of the two Soyuz vehicles docked. Such an evacuation has happened multiple times, including back in 2015 – although the crew has never had to undock.

Since November 2, 2000, the ISS has been continuously manned, so this would not be an ideal scenario. But the station can be mostly commanded from the ground; the astronauts would simply have to close many of the hatches before they left, to keep the modules isolated.

Once the issue had been identified, and a solution found, the US and Russia would discuss sending astronauts to the station again, and re-start the missions and research on board. 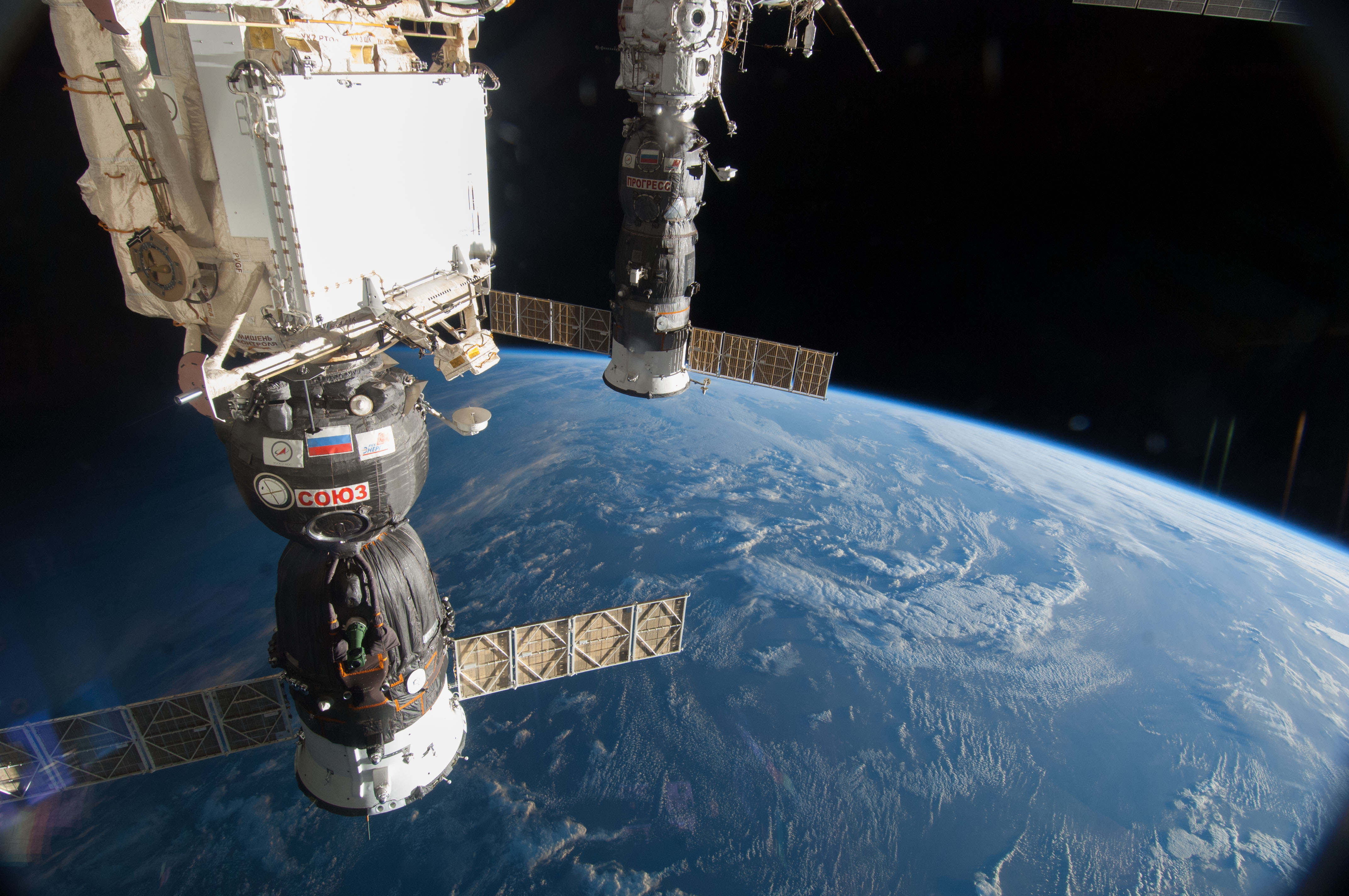 A Soyuz (left) is joined by a Progress vehicle (right) on the ISS. NASA

Before an evacuation is needed in the case of an impact, though, there are a few procedures to run through. If the hull of the station was punctured by an impact, then the station would start to lose pressure. Onboard sensors will detect the pressure drop, and sound an alarm. Additionally, the crew would notice that their ears suddenly popped.

Once the alarm has been raised, the crew will follow a set of procedures: “Warn, Gather, Work”, which is a common emergency response. They will gather in a central location, such as the Russian main hub (called Zvezda), ensuring that they always have a safe path to the Soyuz vehicles to escape if needed.

They will then work out how much time they have before the pressure reaches a dangerously low level. If they can’t fix the leak before then, they will seal the hatches to the segment that is leaking. “Depending on how far they got in finding the leak, this may mean isolating themselves in the return vehicle,” Huot noted.

It may be that the leak is in one of the Soyuz vehicles. If that's the case, which part was hit will dictate what happens next. Each Soyuz vehicle has three segments, but only one (the decent module) is needed to return to Earth. If the impact is in another segment, like the orbital module, the crew can still safely return home in the Soyuz.

If the leak was in the descent module of one of the Soyuz spacecraft, the crew would manually undock the Soyuz while they remained on the station, and send it on an unmanned re-entry. In this scenario, a new Soyuz vehicle would likely be launched unmanned to the station, in order to return the crew safely to Earth at a later date. 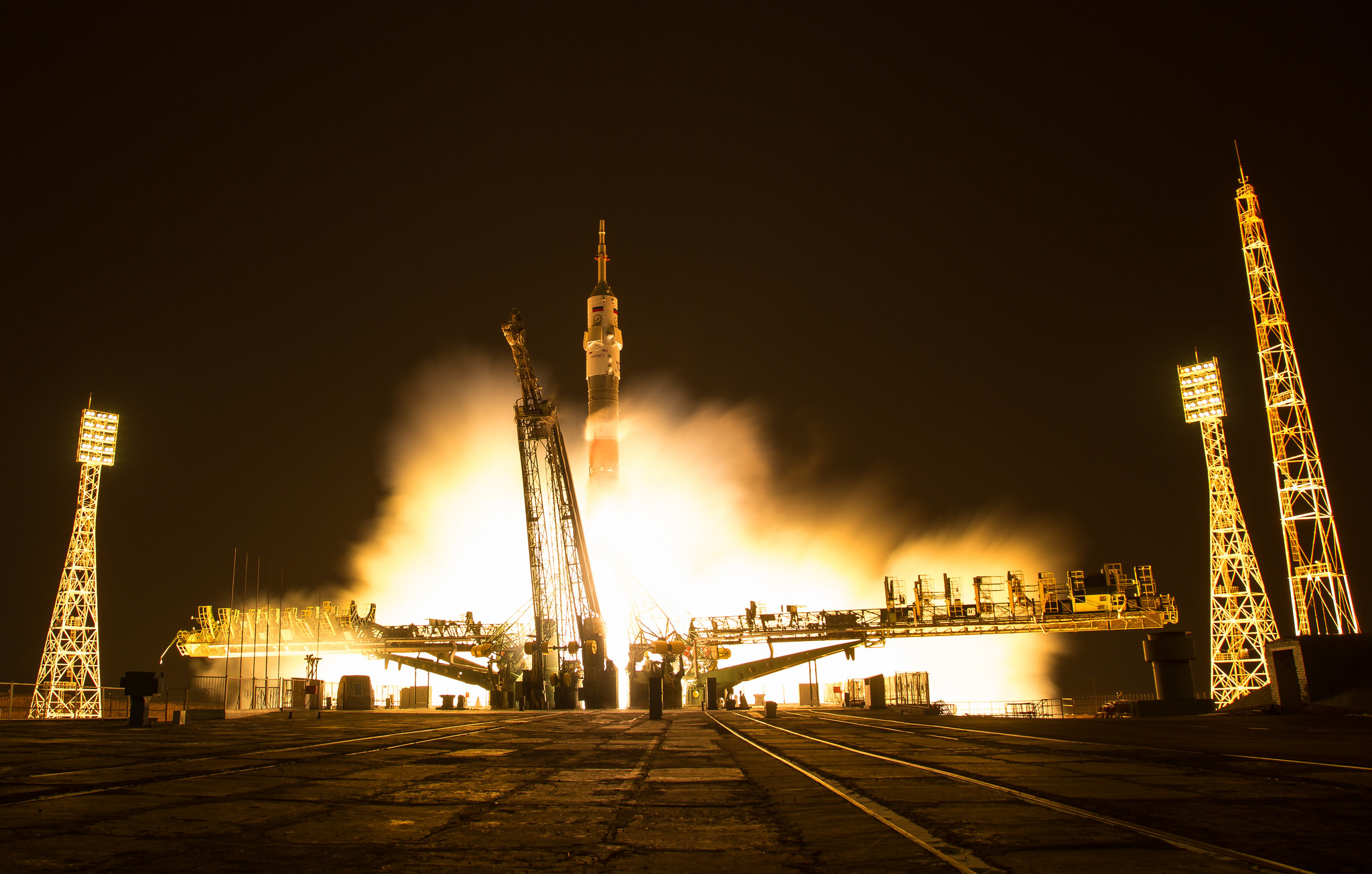 Alternatively, the leak may be on the station. If this is the case, the crew will use hatches to keep the leak isolated. They’ll gradually use the hatches to work out where the leak is – in the Russian or US segment – and then isolate the leaking module.

Once they’ve worked out which module has the leak and the crew is safe, they’ll work with the ground team to address the issue. The leak rate is likely to be very slow, and once the module is at a vacuum, the crew can take their time working on a solution.

Equipment is available on the station to repair leaks, and it may be that two astronauts have to perform a spacewalk outside the station to do so. They could even wear suits inside to fix the leak, which has been done before on the Mir space station in the late 1990s.

“The highest priority is crew safety,” Huot said. “We’ll never go into a leaking module until we are 100 percent sure we have a plan that keeps the crew and the rest of the ISS safe.”

If the leak could not be fixed, the entire crew would leave the station and return to Earth, as mentioned earlier. There are, of course, scenarios where the leak may be much more severe, and depressurization may be fast, like in the movie Gravity. According to Huot, the procedures in place – including moving the station – are designed to prevent such major hypotheticals ever occurring.

The ISS is planned to remain in orbit until at least 2024, and possibly longer. With these procedures, hopefully there will never be a need to evacuate it before then.