Today, Monday, August 21, is a day where the US and other parts of the world can come together and bathe in a stunning display of astronomy. However, some are seeing the phenomenon in a very different light.

The Internet-dwelling flat-Earth community is poised and ready for the great solar eclipse, hoping it will poke holes in all that heliocentric stuff by proving the Earth is flat once and for all.

It’s worth noting that scientists can only predict solar eclipses thanks to the heliocentric model, the idea that the Earth and other planets revolve around the Sun, and the orbital mechanics of our Solar System. So, what could there be to argue with?

Some people on Twitter suggest NASA is encouraging people to wear special solar glasses to hide the truth. In reality, it’s because looking at the Sun will cause permanent damage to your sight by literally burning a dot into your retinas.

“#NASA really dont want u lookin up at the #Eclipse without there Special #Glasses incase u see its not the #Moon infront of it , #FlatEarth,” wrote one tweeter.

When asked what is blocking the Sun if it isn’t the Moon, they replied: “We will find out tomorrow when million see and film it.”

Unfortunately for this flat-Earth enthusiast, it’s a cloudy day where they live in Ireland. Although you might say that bad weather is not unusual in Ireland, they posted a video of the murky sky along with the caption: “Over here in Ireland they really covered our Skies.” “They,” presumably, is NASA. 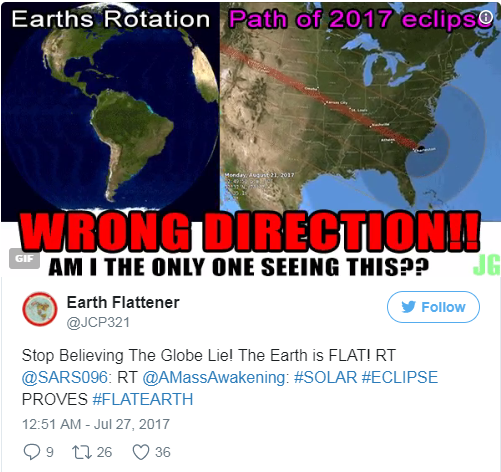 A major "hole in the story" for the flat-Earthers is the Moon's shadow. As YouTuber Jeremiah Daniel explains in his video, the shadow of an object cast from a spotlight shining onto a wall must always be at least the same size as the original object. Yet, they argue, the shadow of the Moon on Earth during a solar eclipse is not Moon-sized at all.

The Sun and a flashlight in your kitchen aren’t totally comparable. As Will Kinney, professor of physics at the University at Buffalo SUNY, told Mic: The Sun isn’t a simple “point source” like a flashlight. It’s a huge source of light, beaming out light in every direction from a considerable distance away relative to the Earth and the Moon. A better analogy would be the shadow of a marble in the light of a bonfire.

They also seem to question why the path of totality should travel from east to west if the Earth is spinning from west to east. Well, as professor Kinney and NASA explain, the moon is actually moving to the east in its orbit at about 3,400 kilometers (2,112 miles) per hour, while the Earth rotates a lot slower at 1,670 kilometers (1,037 miles) per hour.

Of course, none of this actually explains what’s blocking out the Sun, although one video tries to explain it with an odd rehash of Hindu mythology.

Anyway, that's far enough down the rabbit hole for today. Now, go outside and enjoy the total solar eclipse!