Changing weather has been detected on a world where clouds are probably made of corundum, the primary material of rubies and sapphires. Although there have been reports of weather observations for distant planets before, seeing changes with time represents something new.

HAT-P-7 b would not be a fun place to visit even if you could travel the 1,044 light-years to get there. Average surface temperatures are 1,900°C (3,500°F), making Venus look positively chilly. Nevertheless, a paper in Nature Astronomy reveals local changes in weather with time, a first for a planet orbiting another star.

With a radius 1.4 times that of Jupiter and an orbital period of just 2.2 days, HAT-P-7 b is an archetypal “hot Jupiter”, a superheated gas giant. Like most such planets it is tidally locked; one side permanently faces the star, the other experiences eternal night. Based on its light's peak wavelength, temperatures on the day side are 390°C (730°F) above the planetary average.

Using four years of Kepler space telescope observations, a team led by Dr David Armstrong of the University of Warwick found large variations around these extreme values, demonstrating that weather conditions are not constant there.

We cannot be certain what is causing this variability, but HAT-P-7 b's thick atmosphere should be carrying plenty of energy from the day side to where it is night. The paper notes that if there is variation in the efficiency of this process energy would build up at times on the day side, before being released, and get results like those that have been observed.

Conditions are too hot on HAT-P-7 b for clouds as we know them on Earth, but the authors point out that there may well be aerosols of corundum (a form of aluminum oxide that becomes precious stones when impurities give it color) and perovskite in the night-side atmosphere. If these get blown into the “morning” zone, and persist there for a while, it would affect how much light HAT-P-7 b reflects, and thus the temperature. The build-up and dispersal of these aerosols, caused by inconsistent wind speeds, could drive the temperature variations we see.

Previous reports of “weather maps” for exoplanets might more accurately have been considered “climate maps”, for example revealing how average temperatures vary on the day and night sides differ on tidally locked planets.

We've also seen weather changes on a planet-sized object traveling unaccompanied through space, but overcoming the challenges of detecting these sorts of changes hidden in the powerful glow of a star is something new. Armstrong's work represents a step towards the much more difficult goal of seeing something similar on an Earth-like world, including one that might support life. 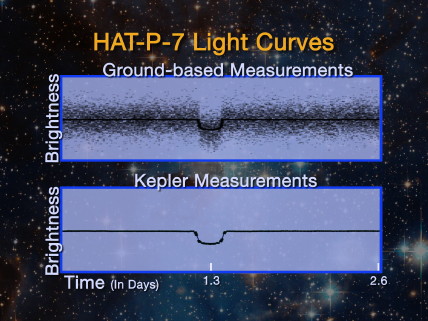 A comparison of HAT-P-7's brightness as seen from ground-based telescopes and Kepler. The dip represents when HAT-P-7 b passes in front of its star. The advantages of space observations are clear. NASA Ames Research Center