A new species of parasitic wasp has been discovered that bursts from the head of its host. As gruesome as this sounds, it gets even weirder, as the unfortunate insect that loses its head is also a parasitic wasp, this time manipulating the trees in which they lay their eggs.

This strange Russian doll relationship of parasites starts with the crypt gall wasp (Bassettia pallida). This insect infests oak trees, laying its eggs under the bark. The resulting larvae manipulate the host tree to develop hollow galls, or crypts, in which the maggots grow until ready to hatch out as adults, at which point the fully formed wasps gnaw their way through the wood and fly free.

But it seems that the parasitic wasp is also getting played. Researchers discovered that sometimes the crypt gall wasp doesn’t fully emerge, and instead its head gets stuck in the hole. Investigating further, they found other larvae from a different species of wasp curled up in the larger insect’s abdomen. Naming this new species Euredus set, after the Egyptian god who trapped his brother in a crypt, killed him, and then cut him into pieces, it has been dubbed the crypt-keeper wasp. 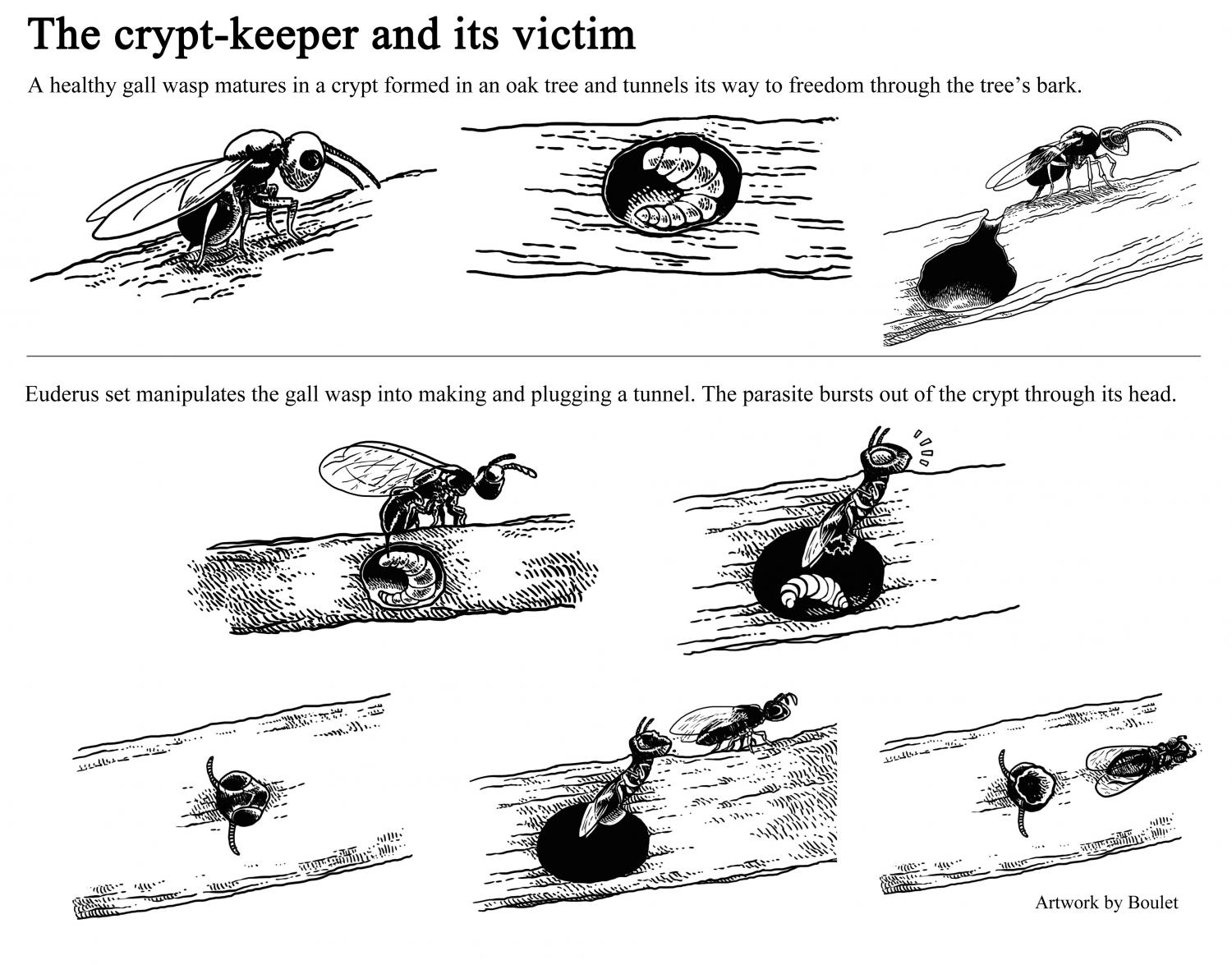 And it uses the crypt gall wasp not only as food, but also as an escape route. It seems that the smaller crypt-keeper manipulates the larger crypt gall wasp to begin its escape attempt prematurely, chewing its way out just enough that the top of its head is poking from the gall. At this point, the host seems to die, while the crypt-keeper continues to develop half in and half out of the body. When ready to leave, the mature adult simply crawls through its host’s lifeless body and ruptures through its head.

How the smaller wasp initially parasitizes the larger is still a little hazy. The researchers note in their study, published in the Proceedings of the Royal Society B, that they did not observe the egg stage of the crypt-keeper, but that it's possible that it infects the host’s adult stage.

The researchers suspect that E. set is what is known as a hypermanipulator, which is an animal that manipulates a species that manipulates another. How exactly the crypt-keeper manages this is not yet known, but they suggest that it could be down to the release of some sort of compound or hormone that influences the host wasp to start burrowing out of the gall earlier than it should and stopping before the hole is complete.