Paleontologists are literally walking in the footprints of dinosaurs. Just a few months ago, researchers stumbled across the carnivorous Abelisaurus’ fossilized footprint in Bolivia, one large enough to fit an entire adult inside. Now, a joint expedition of Japanese and Mongolian scientists has found one to rival it in the Gobi Desert.

This time, it was made by a type of titanosaur. This vast dinosaurian depression measures 1.06 meters (3.5 feet) across and 0.77 meters (2.5 feet) wide, which means that this herbivorous colossus was more than 30 meters (98 feet) in length and 20 meters (66 feet) tall. This is the equivalent of 12 people standing on top of each other’s shoulders.

The last major titanosaur discovery was made back in 2014, when a Patagonian cemetery containing the remains of six of these beasts were found. They each had a weight of around 77 tonnes (85 tons), about 10 times that of the average Tyrannosaurus rex.

Many are confident that these South American dinosaurs were the largest land animals in Earth’s history, and the titanosaur that made this newly discovered footprint was likely to be no different. It lived between 90 and 70 million years ago, during the Late Cretaceous, the twilight age of the dinosaurs.

A sketch of the approximate appearance of the footprint-making Titanosaur. The arrow points to the specific culprit. Okayama University of Science

Although the footprint is not quite the size of the 1.2-meter-long (4-foot-long) Abelisaurus print found in Bolivia, it still ranks as one of the largest ever discovered. A team from the Okayama University of Science (OUS) in Japan is currently scouring the area, hoping to find its skeletal remains.

“A whole skeleton of a giant dinosaur that left such a massive footprint has yet to be uncovered in Mongolia,” Professor Shinobu Ishigaki of the OUS told the Asahi Shimbun. “A fossilized skeleton of such a dinosaur is expected to be eventually discovered.”

Titanosaurs were the last great group of sauropods, and died out when the infamous asteroid ploughed into Earth. Although their size is well publicized, little is known about other aspects of their lifestyle, and much about their gait is based on assumptions. This footprint will help paleontologists work out how they plodded around the land and at what speed.

A reconstruciton of how a related titanosaur, the Argentinosaurus, may have walked. Sellers et al./Wikimedia Commons; CC BY 2.5

As of 2014, there has only been one major fossil discovery of a titanosaur that was relatively intact. Many of the remains of these long-necked, plant-eating giants are highly fragmented, and this limits researchers in their understanding of these relatively gentle giants.

Clearly, though, they were very successful at surviving, with some estimates placing their range at 90 to 66 million years, pretty lengthy for any group of dinosaurs. For comparison, the predatory Spinosaurus only lived for 15 million years, between 112 and 97 million years ago.

The titanosaur owner of this cast would have been so huge that almost any apex predator living alongside it would have found it incredible hard trying to take it down, if not impossible. Indeed, having been found on four continents including Antarctica – which was far warmer and greener at the time – this group of meandering titans would have fought off an incredibly diverse range of hungry carnivores.

Their legendary sizes haven’t gone amiss by the paleontological community. One such titanosaur discovery was given the scientific name Dreadnoughtus schrani, the genus of which means “fear nothing”. It’s amazing that such enormous monsters can result from eggs no more than 12 centimeters (4.7 inches) in diameter. Seeing a herd of these would give any ravenous dinosaur hoping for a sauropod supper pause for thought. 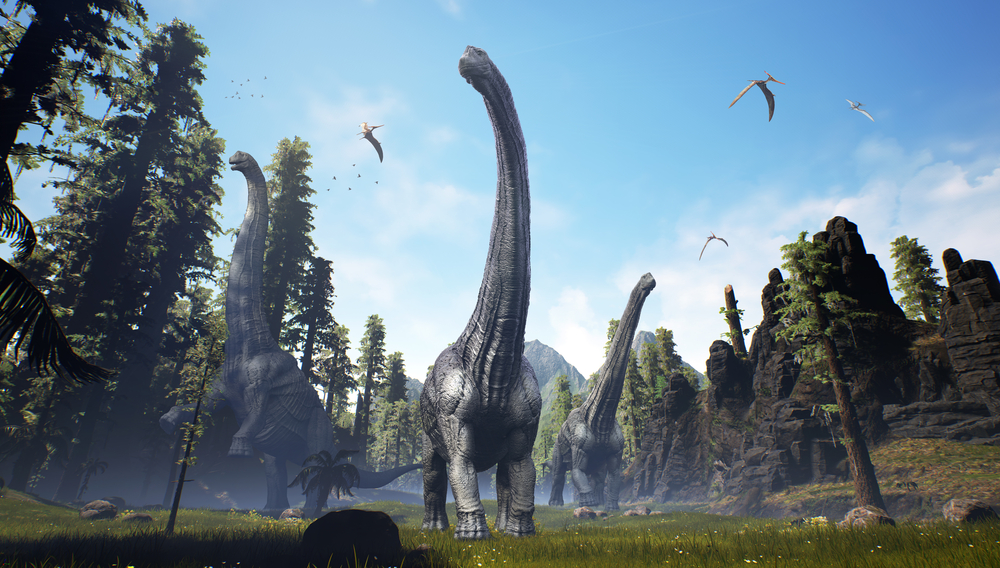 An artist's rendering of a herd of Alamosaurus, a type of titanosaur. Herschel Hoffmeyer/Shutterstock