Vaccinations are one of the of most incredible aspects of modern medicine. They can make previously lethal diseases disappear from society and save countless lives. There is, however, a chance that the vaccines work a little too well and our collective memory is too short to remember the devastating effects some of these diseases caused just a few short decades ago. Recently, for reasons that are not based on science or logic, many parents have outspokenly rejected vaccinating their children. Unfortunately, this has caused a reemergence of easily managed diseases.

The Council on Foreign Relations has released an interactive map detailing the catastrophic outcome of these poor choices, which is now published on the Vaccines Work website.

This interactive map gives a gut-wrenching tour of global outbreaks of measles, mumps, rubella, polio, and whooping cough from 2008-2017. These diseases – all of which are easily prevented by vaccines – can have dire consequences. The Centers for Disease Control and Prevention (CDC) estimates that 146,000 people around the world will die from measles each year, mostly children.

The United States has recently seen a drastic increase in whooping cough, which causes around 195,000 deaths per year. The majority of these deaths occur in impoverished regions with very little access to vaccines. In the case of developed areas like the US or UK, they shouldn’t be happening at all. 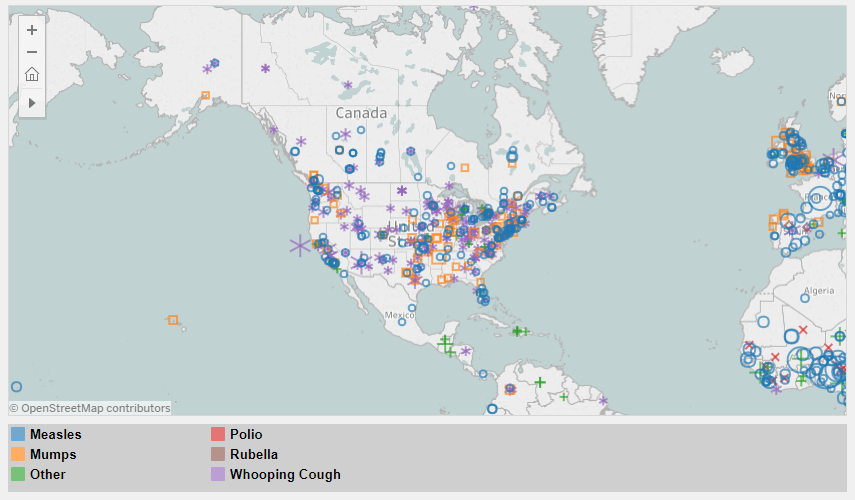 But how did it all begin?

In 1998, Andrew Wakefield released a paper claiming to have linked the measles, mumps, and rubella (MMR) vaccine to the onset of autism. No other scientist has ever been able to match Wakefield’s findings, and in the following years, it became known that Wakefield had a financial conflict of interest. In 2010, an ethics review board found that he had falsified the data in his report, causing an immediate retraction of his original paper and revocation of his medical license. Despite the fact most scientists opposed Wakefield’s “findings” from the start, many people – most quite conspicuously without medical backgrounds – were all too eager to jump on the anti-MMR bandwagon.

Of course, absolutely nothing is without risk and there can be side effects from vaccines, but those are incredibly rare. Some people are unable to be vaccinated due to allergies or other medical conditions such as cancer. This makes it altogether more important for those who can get vaccinated to do so, creating a herd immunity for our most vulnerable members of society.

The full version of the map is available on the Vaccines Work website. The map also documents attacks on health care workers, which have been increasing in recent years. These attacks are indicated on the map with red triangles. Additionally, these attacks correlate with an increased instance of disease, including a polio outbreak in Afghanistan. Socio-economic trends can also be seen, as incidences of measles and whooping cough are increasing in wealthier areas like the US and UK, while poorer areas indicate lacking adequate supplies, giving health officials a clear idea of where efforts need to be increased.

Feeling "Hangry" Is Real: Study Finally Confirms Being Hungry Can Make You Grumpy

"America's Stonehenge" Has Been Blown Up In A Nighttime Attack

"America's Stonehenge" Has Been Blown Up In A Nighttime Attack