An international team of astronomers has observed a galaxy that is churning out stars on an industrial scale, making it one of the most successful star-forming galaxies yet.

The object, SPT0346-52, is located 12.7 billion light-years from Earth and is forming about 4,500 stars every year, each the mass of our Sun. By comparison, our very average Milky Way produces only one Sun per year.

The analysis, reported in the Astrophysical Journal, is very important for our understanding of galaxy evolution. The light we get from SPT0346-52 comes from a time when galaxies were producing stars like there was no tomorrow.

"Astronomers call galaxies with lots of star formation 'starburst' galaxies," said co-author Anthony Gonzalez, from the University of Florida, in a statement. "That term doesn’t seem to do this galaxy justice, so we are calling it a 'hyper-starburst' galaxy."

The galaxy was first discovered using the Atacama Large Millimeter/submillimeter Array (ALMA) thanks to its tremendous infrared signature (36 trillion times more luminous than the Sun). Infrared light is a telltale sign of star formation, but sometimes supermassive black holes can emit in infrared as well.

Using NASA’s Chandra and other observatories, the team discovered a lack of X-rays and radio waves from SPT0346-52, which ruled out a black hole being responsible. Instead, all that infrared light comes from the monumental star formation. 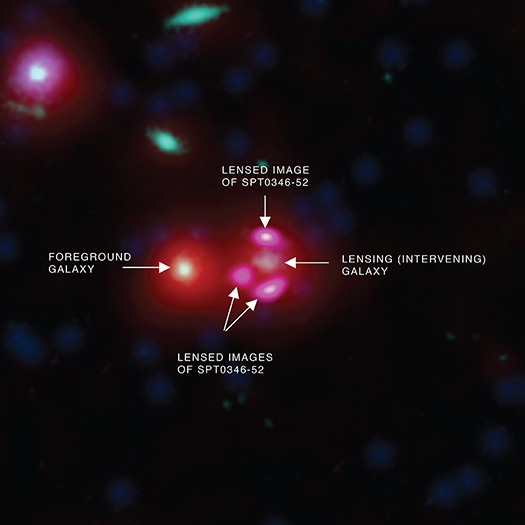 "We now know that this galaxy doesn't have a gorging black hole, but instead is shining brightly with the light from newborn stars," said Jingzhe Ma, also from the University of Florida, who led the new study. "This gives us information about how galaxies and the stars within them evolve during some of the earliest times in the universe."

How galaxies came together is a fascinating area of astronomy filled with a lot of speculation due to the limits of our telescopes. Studies like this one provide much-needed insight into the mysterious epoch of galaxy formation. The observations were only possible because the light of SPT0346-52 has been gravitationally lensed by a large foreground galaxy, making the distant object six times brighter and visible to our instruments.

"For decades, astronomers have known that supermassive black holes and the stars in their host galaxies grow together," said co-author Joaquin Vieira of the University of Illinois at Urbana-Champaign.

"Exactly why they do this is still a mystery. SPT0346-52 is interesting because we have observed an incredible burst of stars forming, and yet found no evidence for a growing supermassive black hole. We would really like to study this galaxy in greater detail and understand what triggered the star formation and how that affects the growth of the black hole."