The closer you get to the center of the galaxy, the more crowded it becomes with stars, at least until reaching the black hole at its core. However, a survey of the Milky Way’s inner reaches suggests there is a near-complete shortage of young stars around the central hub, throwing a major query into our view of galactic evolution, and how things may one day look.

Cepheid variables are an exceptionally valuable tool in understanding the universe. These supergiant stars pulse in brightness on a regular cycle related to how much light they emit on average. By measuring the length of a Cepheid’s cycle, it is possible to work out how bright it truly is, enabling us to determine its distance. This property has allowed us to measure the scale of our own and nearby galaxies.

Professor Noriyuki Matsunaga of the University of Tokyo went looking for Cepheid variables in the inner Milky Way. He used the Japanese-South African telescope, which sees in the infrared, to cut through the dust that blocks visible light in this direction.

Yet even searching at these wavelengths, Matsunaga and his colleagues found almost no Cepheids within 8,000 light-years of the galaxy’s core, almost a third of the way from the core to the Sun.

The finding is even more surprising because last year members of the same team found an abundance of Cepheids forming a disk within the galaxy’s central bulge. These, however, were all within about 250 light-years of the center, with most substantially closer. 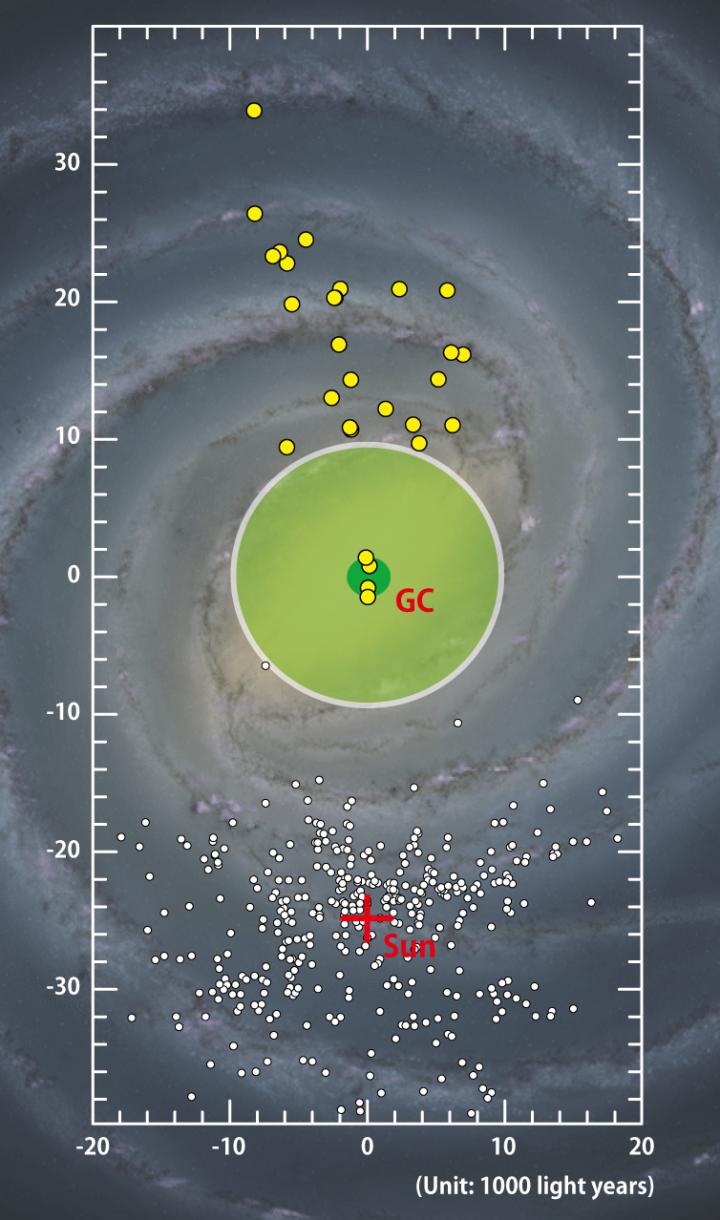 The location of the Sun, newly discovered Cepheid variables (yellow dots), and other known Cepheids (white dots) superimposed on the galaxy. University of Tokyo

"We already found some awhile ago that there are Cepheids in the central heart of our Milky Way (in a region about 150 light-years in radius),” Matsunaga said in a statement. “Now we find that outside this there is a huge Cepheid desert extending out to 8,000 light-years from the center."

The problem doesn’t seem to be the dust, or anything else, obscuring our view. In Monthly Notices of the Royal Astronomical Society (pre-print on arXiv), Matsunaga reports that the few Cepheids the team could detect in this direction appear to be located on the other side of the galactic center, indicating it should be possible to see closer Cepheids if they were there to be found.

The Cepheids Matsunaga sought are Type I, aged 10 to 300 million years old, and their absence indicates a shortage of young stars in general. "The current results indicate that there has been no significant star formation in this large region over hundreds of millions of years,” said co-author Professor Giuseppe Bono of the University of Rome Tor Vergata.

Why star formation should have largely stopped across most of the inner galaxy is a mystery; finding an explanation could require a substantial rethink of the processes occurring in our galaxy’s heart.