When it comes to astronomy, bigger is almost always better.

Although the iconic Hubble Space Telescope is set to be eclipsed by a telescope three times its size in 2018, the James Webb Space Telescope (JWST), astronomers have already proposed an even more impressive space observatory that would put both of them to shame. And tantalizingly, it could reveal how rare or common life is in the Universe.

Dubbed the High-Definition Space Telescope (HDST), it would be five times the size of Hubble and twice as big as the still-yet-to-be-launched JWST. Boasting a mirror up to 12 meters (40 feet) across, in the same honeycomb design of the JWST, the HDST would give views of the Universe simply not achievable before. “It’s hard to convey just how spectacular it’s going to be,” said Julianne Dalcanton, an astronomer at the University of Washington in Seattle, according to Nature.

The huge telescope, estimated to cost $10 billion (£6.5 billion), was proposed in a report released by the Association of Universities for Research in Astronomy (AURA) in Washington DC. Dubbed a “super-Hubble”, it would be placed in an area of gravitational stability 1.5 million kilometers (one million miles) from Earth on the other side of the Moon, known as Lagrange point 2, or L2. Once here, the same location that the JWST will be placed, minimal fuel would be needed to maintain its position. The plan is to use it for both optical and ultraviolet astronomy, while Hubble is only optical and the JWST is set to observe in infrared. 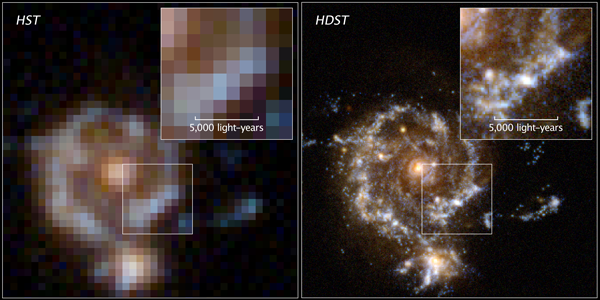 This image illustrates how Hubble’s view of a galaxy 10 billion light-years away, left, would compare to the HDST, right. D. Ceverino, C. Moody, G. Snyder, and Z. Levay/ STScI.

Its huge collecting power would enable it to perform tasks simply not possible with current observatories, most notably the search for life by studying the atmospheres of distant planets. AURA President Matt Mountain said in a statement that one of the ultimate goals would be “to learn whether or not we are alone in the Universe.”

Speaking to IFLScience, Marc Postman of the Space Telescope Science Institute in Maryland, one of the scientists involved in the report, added that we currently have "no idea" if life beyond the Solar System is common or rare, and the HDST is the only telescope in the pipeline that could perform a large enough survey to find out. "If HDST found no exoplanets with signs of life, that would be a very significant result and would suggest life is very rare indeed," he said. 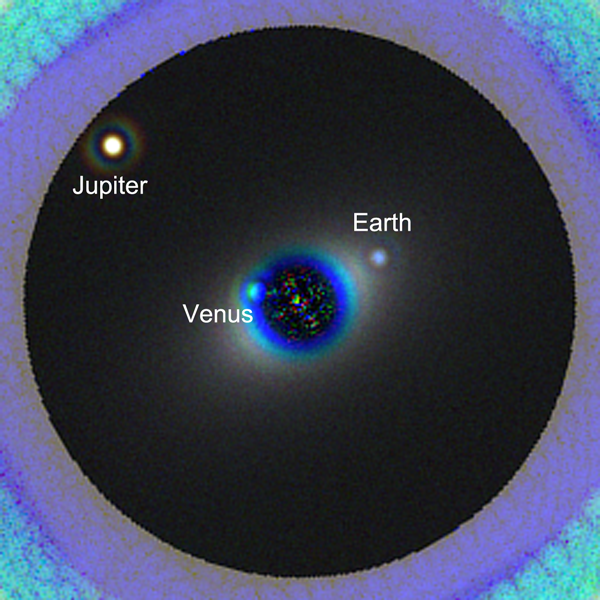 This simulated image shows the view that the HDST would have of a solar system twin located 45 light-years away. L. Pueyo, M. N’Diaye/STScI.

The search for life won't be its only purpose, though. Looking into the distant universe, the telescope could work out how hot gases are distributed around galaxies and fuel star formation, as well as taking clearer images of distant objects than was ever possible before. For now, many aspects of the telescope are simply a “wishlist,” but the scientists note that there is currently expected to be a gap in astronomy in the 2030s with no telescopes planned to be launched in that decade, and this could fill the space.

The report is likely to be seriously considered by NASA as a framework for future astronomy. A similar AURA report in 1996 recommended building the JWST, which, 22 years later, will launch. The HDST, using lessons learned from the JWST, could hopefully be built in a shorter time, making a launch between 2032 and 2034 feasible according to Postman.

How Many Earths Can Fit Inside The Sun?
physics