An international team of astronomers has discovered why some pulsars seem to emit lots of radio waves while others beam out powerful gamma-rays. This striking difference made them wonder if there was more than one type of pulsar in the universe.

The team was looking at the material surrounding a pulsar using the Chandra X-ray observatory and discovered that these pulsars are actually from the same population, and geometry is to blame for the appearance of a difference.

Pulsar are extreme stellar objects, compact neutron stars spinning on their axis up to hundreds of times per second. They were formed in powerful supernovae, and it was their radio emissions that allowed us to first observe them. More recently, astronomers discovered pulsars that produce high energy gamma rays.

In a paper published in the Astrophysical Journal, the researchers looked at two specific objects, Geminga and B0355+54. Geminga emits strongly in gamma rays but appeared radio quiet, while B0355+54 is one of the brightest radio pulsars known and yet it doesn’t seem to produce gamma-rays. The new research discovered that both objects emit both radio and gamma rays, it just depends on the angle we view them to see them.

Radio waves are emitted near the magnetic pole, which in these two cases are well aligned to the spin axis, which is where the jets come out from. The gamma-rays are instead emitted in a donut-shaped (torus) region around the equator of the pulsar. In these two pulsars, the radio and the gamma-ray emissions are perpendicular to each other. 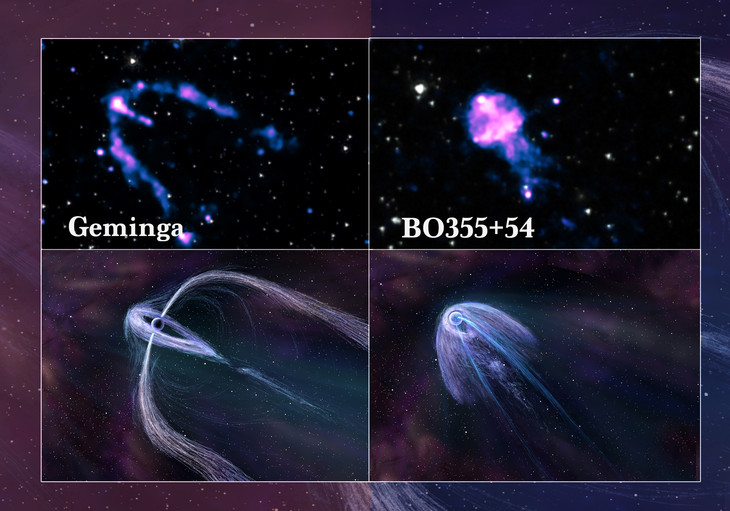 "For Geminga, we view the bright gamma ray pulses and the edge of the pulsar wind nebula torus, but the radio beams near the jets point off to the sides and remain unseen," explained co-author Bettina Posselt, from Penn State, in a statement.

The torus aligns perfectly with our line of sight while the jets are shooting into the plane of the sky. So we are seeing all of the gamma-rays and none of the radio. The situation is reversed for B0355+54.

"For B0355+54, a jet points nearly at us so we detect the bright radio pulses while most of the gamma-ray emission is directed in the plane of the sky and misses the Earth," added co-author Oleg Kargaltsev from George Washington University. "This implies that the pulsar's spin axis direction is close to our line-of-sight direction and that the pulsar is moving nearly perpendicularly to its spin axis."

"One of the main ideas here is that pulse differences have a lot to do with geometry — and it also depends on how the pulsar's spin and magnetic axes are oriented with respect to the line of sight whether you see certain pulsars or not, as well as how you see them," concluded Posselt.