On February 9, 2009, JAXA’s Kaguya lunar orbiter had a beautiful view of a solar eclipse, but in this case it was the Earth obstructing the sun’s light from the moon. 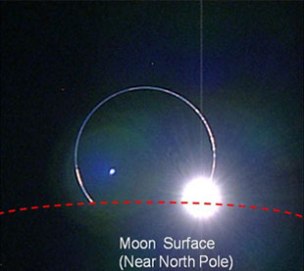 The result is a beautiful diamond ring-like band of light. The circle is not complete because the orbiter was partially obstructed by the moon’s horizon. As the orbiter comes around to a better vantage point and nearly completes the ring—BAM!—the sun peeks from behind Earth and the flash of light ends the eclipse.

This diamond ring eclipse has only been observed from the moon’s perspective a couple of times. Lunar lander Surveyor 3 produced the first image of this type of eclipse on April 24, 1967, though the resolution was nowhere near as clear: It was also spotted by the Apollo 12 crew as they returned home from the moon on November 24, 1969: