A new report from the US Department of Energy is going to make the argument that green energy isn’t good for the economy a little harder for the incoming White House administration.

The second annual US Energy and Employment Report (USEER) from the US Department of Energy (DOE) showed that in 2016, solar energy employed more people than the traditional coal, gas, and oil combined.

"Proportionally, solar employment accounts for the largest share of workers in the Electric Power Generation sector," the report, released on January 13, states. "This is largely due to the construction related to the significant buildout of new solar generation capacity."

Within the Electric Power Generation sector, the report found that solar employed 374,000 people over the year 2015-2016, which makes up 43 percent of the sector’s workforce, while the traditional fossil fuels combined employed 187,117, making up 22 percent of the workforce. 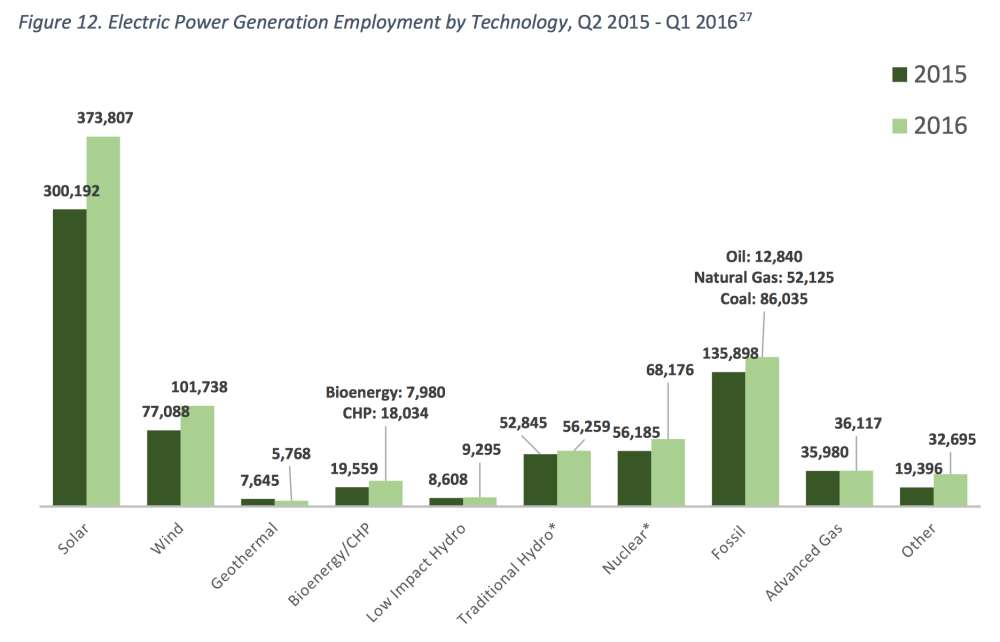 According to the report, 6.4 million Americans now work in the energy industry and 2016 added 300,000 new net jobs, which made up 14 percent of the entire job growth of the US for that year.

Green energy saw a boost as the data showed that energy efficiency jobs increased by 133,000 for a total of 2.2 million. Since 2015, solar industry employment has increased by 25 percent, adding 73,000 new jobs, while wind energy employment also saw a 32 percent increase, making it the third-largest workforce in the Electric Power Generation sector, now employing 100,000 people.

The report also showed an upward trend in energy efficiency jobs across other industries as well. The data showed that roughly 32 percent of the US construction industry was working on energy or building energy efficient projects. Of the 2.4 million people working in the Motor Vehicles industry, the report identified 260,000 jobs supporting alternative fuel vehicles, an increase of 69,000 jobs in the last year.

The USEER also surveyed energy employers across the US to get a forecast for projected job growth in 2017. The results predicted an increase in hiring across many industries within the energy sector, with energy efficiency employers projecting the highest growth rate over the next 12 months, suggesting a 9 percent increase across the sector, or around 200,000 jobs. The fuels sector, on the other hand, predicts a decline of 3 percent during 2017.

“This report verifies the dynamic role that our energy technologies and infrastructure play in a 21st-century economy,” DOE Senior Advisor on Industrial and Economic Policy David Foster said in a statement from Washington. “Whether producing natural gas or solar power at increasingly lower prices or reducing our consumption of energy through smart grids and fuel efficient vehicles, energy innovation is proving itself as the important driver of economic growth in America.”