Several British water companies are being mocked by their customers after a scientist discovered they are still using a 16th-century technique in order to find and repair water mains. Wait for it, because this story gets really weird.

Sally Le Page, an evolutionary biologist and science communicator, was notified by her father when he called out a technician from Severn Trent Water and saw the equipment brought to measure up for a water supply. In order to locate the water mains beneath the surface of the road, the technician had brought with him an ultrasonic flow detector, a map of the water network and... water divining rods.

Water divining rods are used for "dowsing" for water. You get a Y-shaped stick, or two L-shaped rods and walk around where you suspect there might be water or valuable minerals. When the L-shaped rods cross, or the Y-shaped stick dips, bingo – you have found your water, it's time to get digging.

Except, it has no relation to where water is, and no scientific evidence exists for dowsing rods working in any way, because it's nonsense.

What's actually happening is the "ideomotor effect" or, if you believe one company, "magic" (more on that later). The ideomotor effect is when your body moves without you realizing you are doing it. Unconsciously you may move your muscles a minuscule amount, enough to make a pendulum swing, a dowsing rod dip, or a glass move around a ouiji board.

Sally, who makes popular YouTube science videos for her channel Shed Science, didn't leave it there, though. She started asking all the water companies in the UK whether they still use this 16th-century "magic", and one by one they all admitted that yes, they were indeed still using this method to find water mains, and would quite happily drill a big hole in the ground and possibly hit said water mains just because a couple of sticks crossed when held out in front of them (we may be paraphrasing).

When questioned, their answers are quite disturbing, even suggesting it worked through "magic".

Southern Water, the company who started Sally on this quest, said they find the "old methods" just as effective as satellites. Yep. 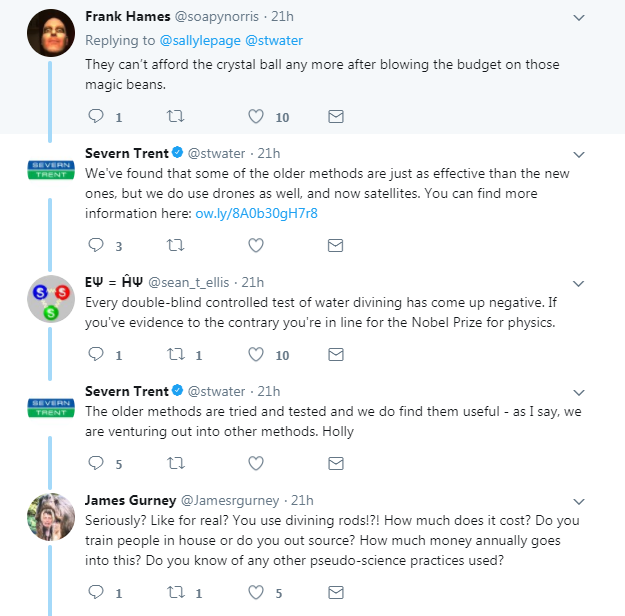 As Sally points out in her blog, that's a company responsible for 4.5 million households admitting they essentially use magic to find and repair your water pipes.

Yorkshire Water even responded with a "it works through magic" gif. Nice to see you're taking this seriously, Yorkshire.

Another company linked her to their YouTube video titled "Divine Powers", where a representative of the company explains dowsing as he demonstrates it. 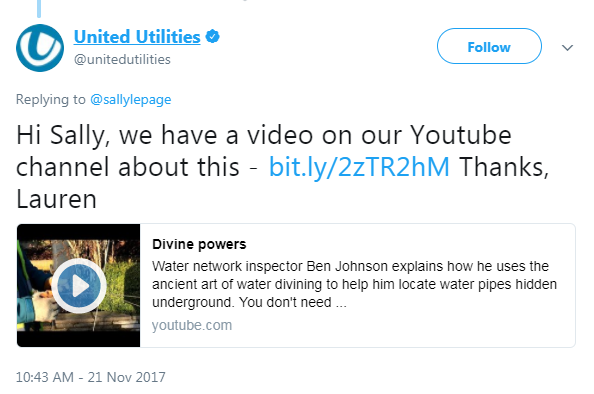 He does find the water, right "About where the maps say," he says. "A lot of people think it doesn't work but I find a lot of water mains through water divining."

As Sally points out though, consulting a map is what is causing him to unconsciously move the rods, as he passes over the area he expects to find the pipes.

Unbeivably, the outdated, debunked practice appears to be freely admitted to by the majority of the major UK companies that Sally has asked so far.

Sally writes brilliantly about the whole strange debacle on her blog, and you can keep up to date on her Twitter, as this story by no means seems to be over.