Bats are incredible feats of biological engineering. With their ability to navigate through the deepest darkness, their remarkable aerial agility, and their rather novel sleeping methods, it’s not a surprise that scientists have been looking to them for inspiration.

As reported in a rather visually striking piece of research in the journal Science Robotics, a team from the University of Illinois at Urbana-Champaign (UoI) and the California Institute of Technology (Caltech) have built their own Bat Bot – a “biomimetic robotic platform” that flies around and explores an environment just like the real deal.

Flying robots already exist, of course, but these are limited to basic up-and-down flapping motions or dangerous, spinning rotors. Recreating the flight patterns of bats, on the other hand, has proved near-impossible for some time. Their wings are incredibly complex aerodynamic devices, able to morph and bend using at least 40 different individual joints.

Stepping up to the challenge, this team carefully analyzed the placement and biological design of these joints, and concluded that the shoulder, elbow, and wrist bends, along with the laterally moving tail “swish”, were the key points of articulation that they needed to be replicated.

Using lightweight carbon-fiber artificial bones, 3D-printed ball-and-socket structures, and a durable silicone “skin”, they built their Bat Bot. Moved by a series of extremely small motors along its “spine”, this little robo-critter is able to swoop, dive, hover, and gracefully fly through a room with ease.

Thanks to a series of microsensors on its “head”, it is able to navigate through its surroundings semi-autonomously. It is not yet currently able to explore an area with any free will, so to speak, but in the near-future, the team hope advances in computational systems can be used to allow it to be more independent.

Co-author Seth Hutchinson, professor of electrical and computer engineering at the UoI, told reporters at a press conference that unlike birds of the same size, “bats [including our own] are more maneuverable,” partly because they can “reconfigure their body” in ways birds cannot.

Just like the real bat, Bat Bot is able to move its wings in an asymmetrical manner, meaning it is likely the most precise flying robot in the world.

Importantly, as it only weights 93 grams (0.2 pounds) and doesn’t have any rapidly moving parts, this strange type of drone could interact with humans or delicate objects without damaging them in a way standard drones cannot. Even an accidental collision will be very unlikely to damage anything.

The researchers envisage a future where this type of robotic creature coexists with humans, monitoring them, assisting with search and rescue missions, or keeping an eye out for potential hazards. It could even flit around construction sites to monitor hard-to-reach parts of the architecture for damage.

They could also check out a space with a 3D camera and radiation sensor to go places humans cannot go – “the Fukushima disaster area, for example,” Hutchinson added.

The morphing ability of the silicone wings allows the Bat Bot to move with unprecedented precision. Ramezani et al./Science Robotics

Around Fukushima, “there’s so much debris, doors have collapsed – so the ability to maneuver through environments like that, and to do it quickly, is something that our robot can achieve, [both] more effectively and for a longer time than traditional helicopter-style robots.”

Perhaps one day, if linked up to other Bat Bots, they could move together as a swarm.

This is hardly the first time engineers have used the natural world as a source of inspiration for robotics, but it’s a wonderful example of how man-made wonders aren’t always the most ideal, perfect types of machinery. Natural selection is inarguably an efficient if ruthless mechanism for forging the best biological blueprints, so it’s only natural that we’d try to steal them from time to time. 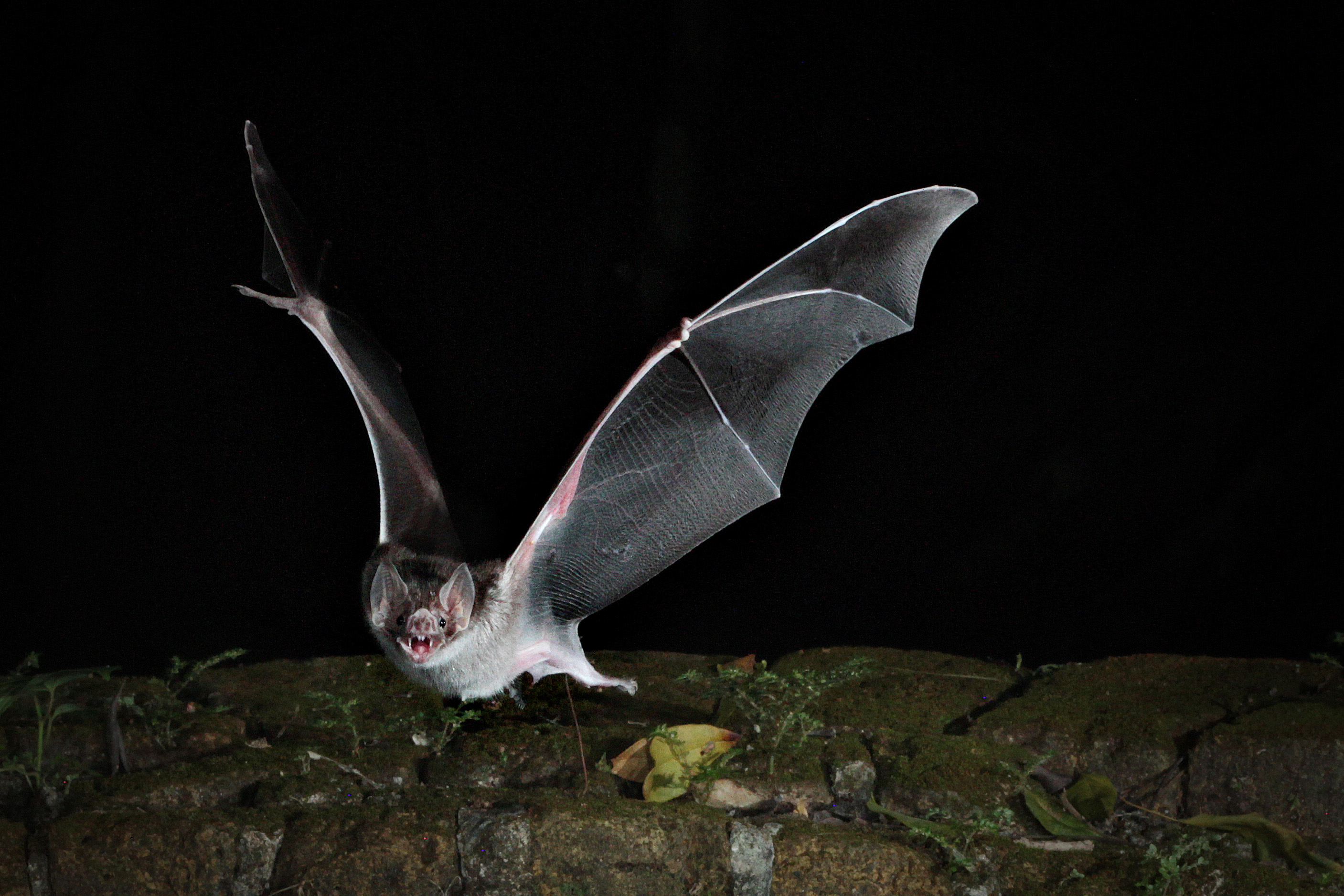 R. aegyptiacus, one of the bats carefully studied as part of the Bat Bot construction process. Ramezani et al./Science Robotics