Researchers have unearthed the elaborately modified remains of a 1,600-year-old woman close to the famous ruins of Teotihuacan near Mexico City. According to a statement (in Spanish) put out by the National Institute of Anthropology and History, several of the woman’s teeth appear to have been adorned or replaced with prosthetics made of attractive minerals like pyrite – also known as fool’s gold – and serpentine.

Thought to have been buried at some point between 350 and 400 CE, the upper-class woman’s skull also seems to have been deliberately elongated, by being compressed under extreme pressure. Interestingly, these types of modifications are not believed to have been practiced in the central Mexican altiplano, where Teotihuacan is located, but are instead more commonly associated with the Maya-dominated regions of southern Mexico and Central America. 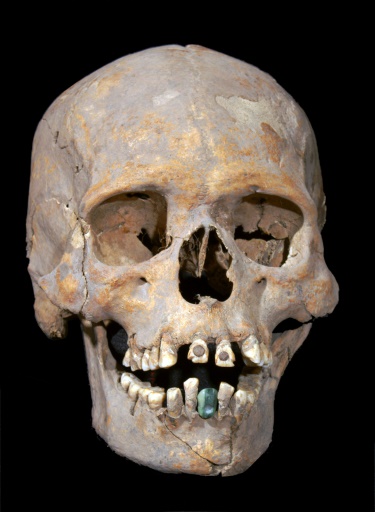 Found in an area of Teotihuacan called Tlailotlacan, which means “far-away people”, the woman may well have been an immigrant from the south, and, according to anthropologist Jorge Archer Velasco, was around 35 to 40 years old at the time of her death.

Having originally unearthed the body in 2014, Velasco and his colleagues are now examining the many fascinating and surprising features of these incredible remains – such as the round pyrite stones encrusted into her two upper front teeth, as well as the serpentine implants that have been inserted in place of the lower incisors.

According to Velasco, the insertion of fool’s gold into the front teeth “would have been achieved by drilling into the enamel, a technique that has been reported in the Maya region around Peten and Belize.”

Regarding the lower incisor implants, he explains that “we are currently conducting an analysis into whether this piece was fixed using some type of cement or a fiber that connected it to the jawbone.”

Rising to prominence in the first century CE, Teotihuacan was one of the largest and most bustling cities of pre-Columbian America, yet was mysteriously abandoned in the seventh century. Home to the legendary Pyramids of the Sun and Moon, the city was later re-discovered by the Aztecs and used as a place of worship, with many human sacrifices being performed here under the rule of Moctezuma in the 16th century.

Image: The skull appears to have been compressed in order to make it longer, and also contains a number of dental modifications. Instituto Nacional de Antropología e Historia