Since the invention of photography, any weird enough artifact in an image has been claimed as proof of aliens, yetis, and ghosts. Obviously, mundane explanations seldom make posts go viral, so a series of corrupted images taken by NASA’s twin STEREO spacecraft last week have been claimed to show a UFO orbiting Earth and the Sun.

The culprit for the “incriminating” pictures is the Heliospheric Imager 1 (HI1), which is part of the Sun-Earth Connection Coronal and Heliospheric Investigation (SECCHI) on STEREO. SECCHI studies the space between our star and our planet to map coronal mass ejections (CMEs) from the Sun in 3D.

The images show two bright spots (Venus and Earth based on the current location of STEREO), and several times throughout the day an image of the Sun is superimposed on it. By simply looking at the different cameras STEREO has on board, you would see that it is simply a series of corrupted images.

The other explanation, as reported by UFOMania and many news outlets, is that last week a large semi-transparent UFO appeared in the Solar System, got photographed by STEREO a few times, disappeared, and reappeared again, all without anyone else on Earth seeing it. 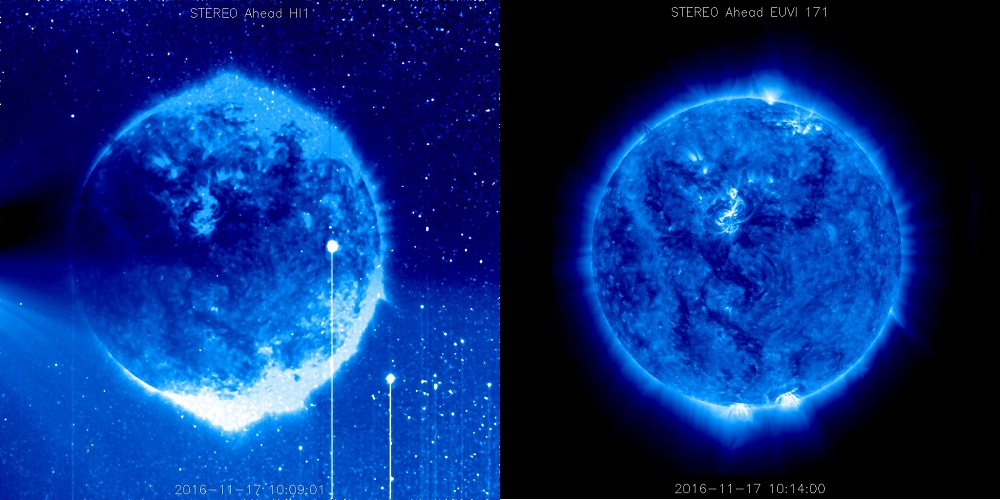 On the left, the image of the "semi-transparent UFO" in front of two planets, and on the right a completely unrelated image of the Sun taken 6 minutes later. NASA/STEREO

In reality, the images by SECCHI are susceptible to corruption. The images are processed directly on board and not by scientists on Earth, so on rare occasions when the processors become overloaded, images from different instruments are merged into one.

“Because the images from the Heliospheric Imager (HI) telescopes are built up from a large number of exposures added together, this sometimes results in 'double exposures', where data from several telescopes appear in the same image,” reads the NASA’s STEREO Learning Center page.

Although STEREO might not have discovered aliens, it does incredible work monitoring the Sun. Its constant observations have provided us with a better understanding of our stars and the dangers that our Sun poses to humanity when it’s very active.

"The twin STEREO spacecraft have been a stunning window for us on the Solar System: they’ve let us track solar storms from the Sun to the Earth. The mission has really changed the way we think about the Solar System, so now we’re preparing to launch the Solar Orbiter mission in 2 years’ time, which will get a much closer look at the Sun and its wind from inside the sizzling orbit of Mercury," Dr. David Williams, solar scientists at ESA told IFLScience.