New observations from the Hubble Space Telescope have revealed that New Horizons' next target, called 2014 MU69, is as red, if not redder, than Pluto.

These observations are the first hints of what the surface properties of this object, located 6.6 billion kilometers (4.1 billion miles) from the Sun, will be. New Horizons will reach MU69 on January 1, 2019.

“The reddish color tells us the type of Kuiper Belt object 2014 MU69 is,” said Amanda Zangari, a New Horizons post-doctoral researcher from the Southwest Research Institute in Colorado, in a statement. “The data confirms that on New Year’s Day 2019, New Horizons will be looking at one of the ancient building blocks of the planets.”

The reddish color on Pluto is due to molecules called tholins, a class of molecules formed by sunlight interacting with organic compounds like methane. This might be the case for MU69 as well. The object is part of the Kuiper Belt, a region of the Solar System beyond the orbit of Neptune that is full of asteroids, comets, and dwarf planets. MU69 is the smallest object from the region to have its color measured.

This finding, which was announced at the joint meeting of the 48th American Astronomical Society Division for Planetary Sciences and 11th European Planetary Science Congress in Pasadena, California, is not the only announcement from the mission.

New Horizons is continuing to transmit the last of its data from the July 2015 flyby of Pluto, so there are still new discoveries to be made.

The team believes they have observed several groups of clouds, something that was hinted at earlier this year. This is an indication that the hazy Plutonian atmosphere might be hiding something.

“If there are clouds, it would mean the weather on Pluto is even more complex than we imagined," said Alan Stern, principal investigator of the New Horizons mission, also from the Southwest Research Institute.

Examples of clouds on Pluto from the New Horizons data. NASA/JHUAPL/SwRI

“We’ve seen similar landslides on other rocky and icy planets, such as Mars and Saturn’s moon Iapetus, but these are the first landslides we’ve seen this far from the sun, in the Kuiper Belt,” said Ross Beyer, a science team researcher from the Sagan Center at the SETI Institute and NASA Ames Research Center in California. “The big question is will they be detected elsewhere in the Kuiper Belt?”

New Horizons is currently 5.5 billion kilometers (3.4 billion miles) from Earth and it is moving at about 14 kilometers (8.7 miles) every second. The last data from the flyby will be transmitted on October 23. 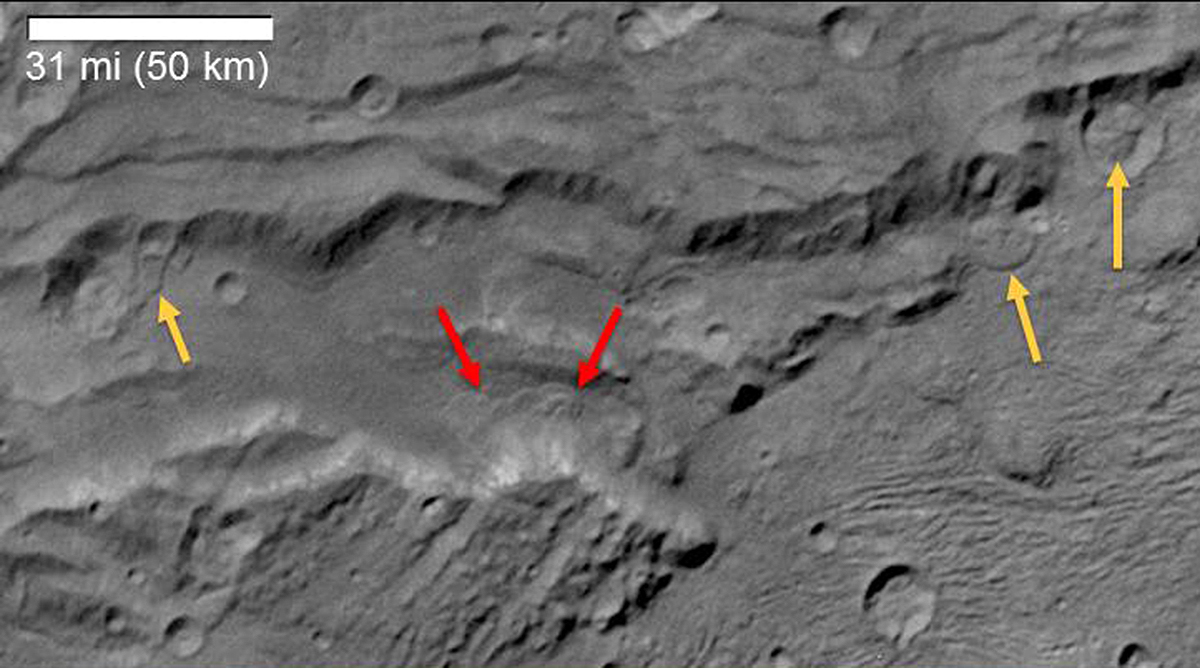 The observed landslides on the surface of Charon. NASA/JHUAPL/SwRI