This coming Monday, one of the most exciting space missions in recent history is going to begin. That’s when, for only the second time ever, a spacecraft is going to enter orbit around Jupiter. And this time, we’ll learn more about the largest planet of our Solar System than ever before.

The spacecraft, NASA’s Juno, has understandably got astronomers and scientists alike abuzz with excitement. It was launched on August 5, 2011, and since then has undertaken a five-year journey around the Solar System, including a flyby of Earth for a gravitational boost, to make it to the gas giant. It is the first spacecraft to do so since NASA’s Galileo spacecraft, which orbited Jupiter from 1995 to 2003.

“We’ve been waiting many years for our spacecraft to get there,” Jared Espley, Juno program scientist at NASA, told IFLScience. “We’re there to understand part of the origins of the Solar System, and that has implications for the origins of our own planet.

“It’s been a long time coming, and I’m super excited.”

The dramatic trailer above explains the Juno mission

Juno is immediately noticeable for its shape, which has three long arms laden with solar panels, each stretching 9 meters (30 feet). These provide all the power for Juno; it is entirely solar-powered, the first spacecraft to do this at such a great distance from Earth. Other previous spacecraft that have explored the outer Solar System have used nuclear-based power to keep their juices flowing.

Having travelled 2.8 billion kilometers (1.7 billion miles), the culmination of this journey comes on July 4, Independence Day in the US, just before midnight EDT (5am BST). Juno will then enter into a wide, sweeping orbit around Jupiter, taking it between a distance of 3 million kilometers (2 million miles) and 5,000 kilometers (3,000 miles) from the surface, the closest any spacecraft has ever been, to help it avoid Jupiter’s deadly radiation. It will make 37 flybys of Jupiter in this orbit to collect all its data over the course of 20 months.

Its wide orbit will help mitigate some of the effects of the radiation, while its key instruments are encased in a titanium vault to keep them as safe as possible. The solar panels, though, are expected to lose a few percent of their efficiency over the course of the mission.

About three months after entering orbit, in October, Juno’s science mission will begin. And it’s going to be a hugely impressive mission. On board the spacecraft are nine instruments, which will measure in detail the planet’s magnetic field and even its internal structure.

This latter goal is actually rather incredible. Using a gravity science instrument and a magnetometer, Juno will create a 3D distribution of Jupiter, all the way down to what is thought to be a rocky core. This is the first time in history we will find out what is inside a gas giant.

“One of the major science goals is to understand the origins of Jupiter, which has implications for planets in general,” said Espley. At the moment, scientists aren't sure if Jupiter formed in the position it is now in, or further out before migrating inwards. “We’re really interested in what material is inside of Jupiter,” added Espley

But it’s not just scientific investigations like this that Juno will be undertaking. On board it also has a camera, which is solely for public engagement. In fact, it already snapped an image of Jupiter and its four largest moons from a distance of 10.9 million kilometers (6.8 million miles) on June 21. And once Juno enters orbit, the public will be asked what they want it to snap next at NASA's Juno website. 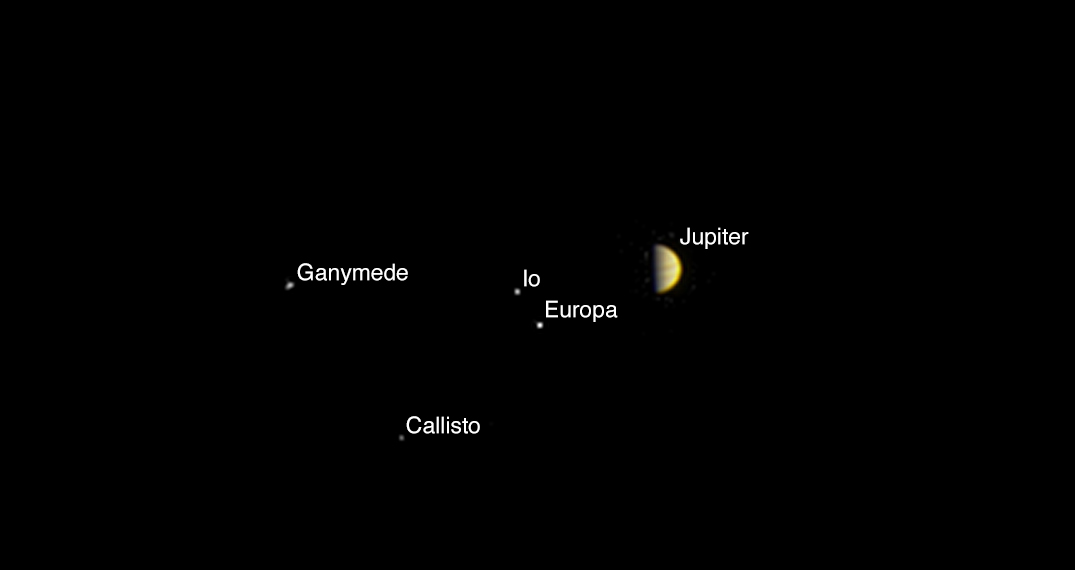 Above, an image snapped by Juno of Jupiter and its four largest Galilean moons. NASA/JPL-Caltech/SwRI/MSSS

“We’ll be able to get close-ups, really spectacular views,” said Espley. The public will be able to vote on suggestions, which could include snapping the first-ever images of Jupiter’s pole, and also new shots of the famous Great Red Spot – Jupiter's giant storm that has raged for more than 400 years.

Although the mission is only intended to orbit Jupiter, there is also a possibility that Juno might be able to image some of Jupiter’s moons – and icy Europa, with its subsurface ocean, will surely be especially of interest.

The mission itself will last for little more than a year, with Juno set to be sent crashing into Jupiter’s atmosphere at the culmination, to prevent it hitting and contaminating one of the moons by accident at a later date. There is, however, a possibility that the mission may be slightly extended, according to Espley, putting Juno in a more circular orbit around Jupiter and allowing it to slowly descend into the gas giant's atmosphere as its orbit decays, although we’ll have to wait and see if that gets approved.

Even if it doesn’t, the mission is set to be hugely exciting. Thanks to Juno, we’ll learn more about Jupiter than ever before – and maybe even our own origins, too.