There’s a lot of water on Mars. Of course, we all know there’s liquid water on there by now, but in this case we’re referring to the rather massive and permanent ice caps at its poles.

These enormous features of our neighboring planet’s cryosphere often stay out of the public imagination. Fortunately, NASA have been tinkering away at some rather gorgeous visualizations of these ice caps for your eyes to peruse.

Using data from the Shallow Radar (SHARAD) instrumentation onboard the agency’s Mars Reconnaissance Orbiter (MRO), researchers stitched together more than 2,000 flybys of the poles in order to build up a high-resolution 3D picture of them. Not only are these images the first of their kind for planetary exploration, but they are in a way more detailed than any similar survey conducted on Earth.

The surface layers, seen as a record of recent climate change on Mars, are clearly visible as streaks and indentations here. However, it’s the subsurface features that really stand out. Adding to what has been observed using ground-penetrating radar surveys, these new images highlight several ancient, bowl-shaped impact craters that have been buried beneath the ice.

All in all, the ice caps contain around 3.2 million cubic kilometers (roughly 0.8 million cubic miles) of frozen material, most of which is water ice. That more than makes up the gigantic Greenland Ice Sheet here on Earth.

The physical characteristics of such a significant volume of water is, in a way, a snapshot of the history of the entire Red Planet, so understanding both ice caps is a key piece of scientific discourse. These remarkable new images highlight both what we do know and what we are yet to discover about the icy realms of Mars.

The northern (a) and southern (b) polar ice caps. The red colorations represent the ice masses at higher elevations. The individual lines represents orbits by the MRO. NASA/ASI/JPL/FREAQS/PSI/SI/WUSTL

When this dry ice sublimes back into a gas in the summer months, it happens so dramatically that winds exceeding speeds of 400 kilometers (roughly 250 miles) per hour can form around the region. Some of the sublimation is so violent that it causes explosive geyser-like features to appear during the transition from winter to spring.

In fact, the southern cap is particularly weird and, compared to Antarctica, alien indeed. This dry ice cycle is so extreme that it actually changes the planet’s overall gravitational field.

An accompanying paper in a special publication of the Society of Exploration Geophysicists notes that the volume of dry ice in the southern hemisphere is far greater than earlier estimates may have suggested.

The new 3D images have beautifully mapped the northern cap's Chasma Boreale, a canyon running across at least half of it that’s even deeper than the Grand Canyon. The researchers also note that their data indicates that there may be several subglacial impact craters nearby that have not been seen before.

Ultimately, though, this research is looking towards the future, not just the past.

One day, its likely humanity will use the water in these ice caps to sustain local agriculture. The sooner we understand them, the better a chance we will eventually have at colonizing the surface of Mars – and this data represents the start of a huge leap forwards in this regard. 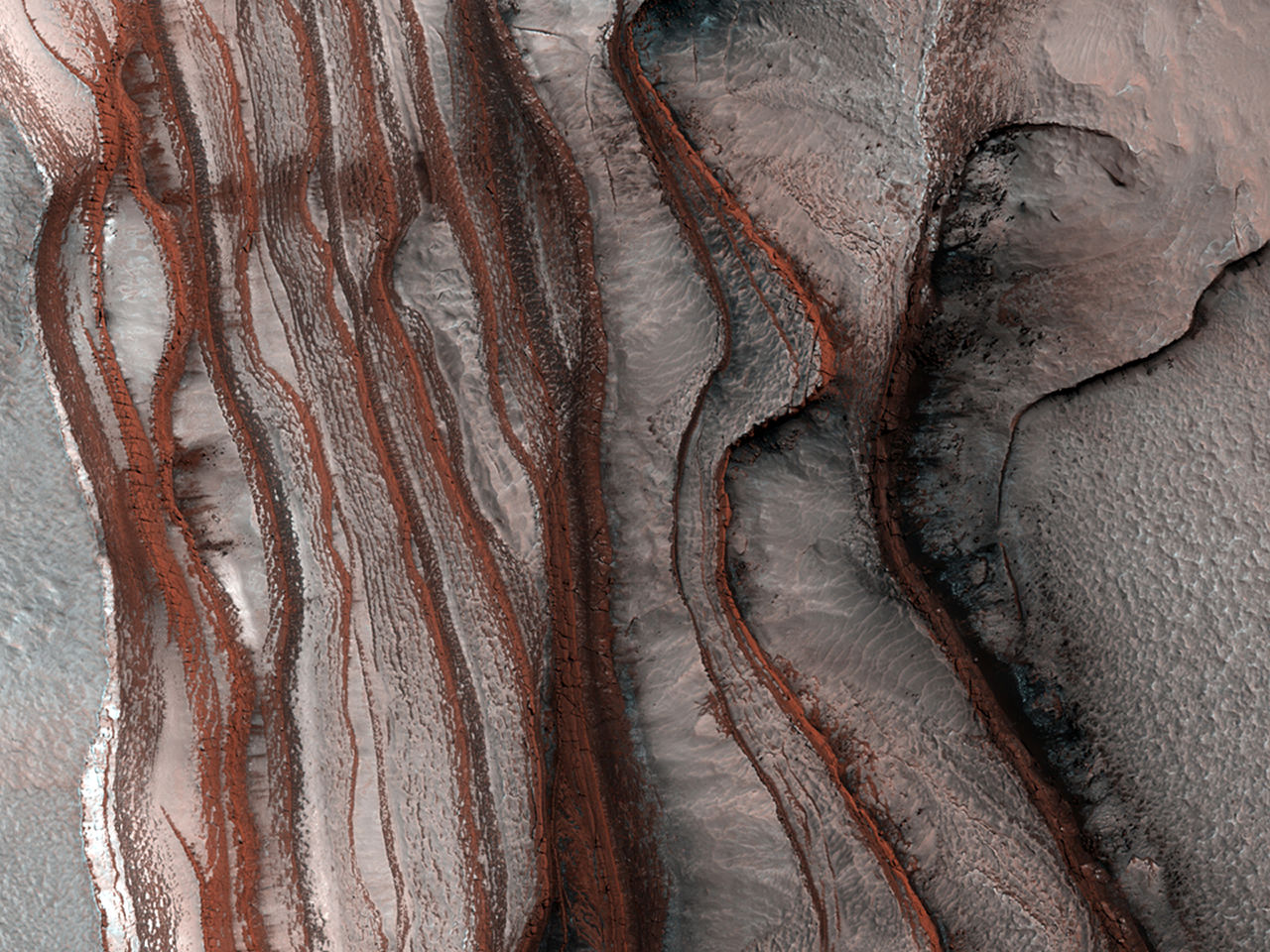 The Red Cliffs of Mars at Chasma Boreale, pictured in 2008. HiRISE/MRO/LPL/UoA/NASA