“Moon over Makemake” sounds like a novel or painting, but actually represents a NASA announcement of the discovery of a companion for the third largest (and second brightest) dwarf planet in the Kuiper Belt. The announcement strengthens the hypothesis that most dwarf planets have moons, while also making Pluto look somewhat less special.

The Kuiper Belt stretches from Neptune's orbit to 50 astronomical units (AU) from the Sun. Until 2000, it was thought to contain just Pluto, its moon Charon, and some comets, but recently many new inhabitants have been revealed. Moons have already been found around Eris, the second largest known resident of the belt, and smaller Kuiper Belt Objects (KBOs).

Now the Hubble Space Telescope has added S/2015 (136472), nicknamed MK2, to the list. So far very little is known about MK2. It is thought to be about 160 kilometers (100 miles) across, and is about 1,300 times fainter than Makemake itself. However, its orbital characteristics are as yet unknown. 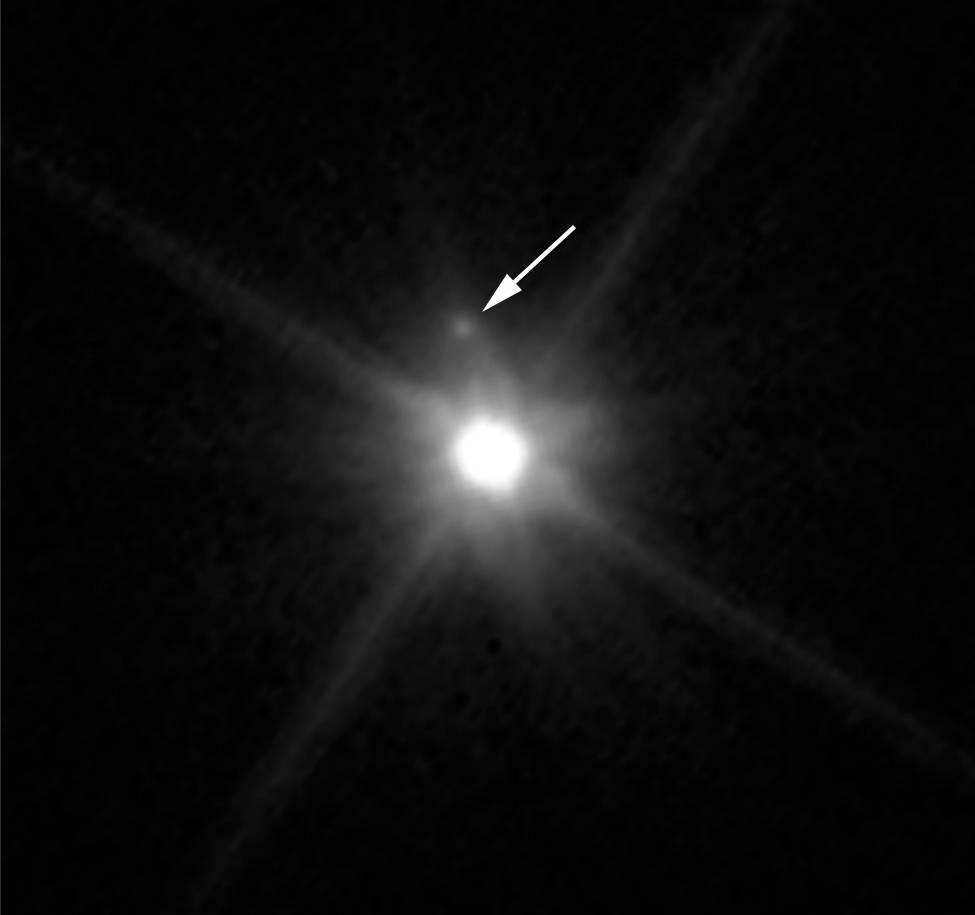 MK2 is barely visible above Makemake in this Hubble image. NASA, ESA, and A. Parker and M. Buie (SwRI)

Once the orbit is measured we will be able to calculate Makemake's mass (using the fact that the orbital period depends on distance and mass). Since we already have a fair idea of Makemake's size, 1,500 kilometers (930 miles) across, this will provide an estimate of its density, and therefore composition. Astronomers are keen to know how much it differs from Pluto, other than in size.

It is already known that Makemake, like Pluto, is covered in frozen methane, but we know nothing about what lies beneath. Pluto has an average distance of 39.5 AU from the Sun, while Makemake is 45.7 AU.

Giant Earth-based telescopes can detect far fainter objects than the relatively small Hubble Telescope, but they have more difficulty finding something faint when it is lost in the glare of a relatively bright object like Makemake. In addition to this, Hubble may have got a little bit lucky with this observation, which was made in April 2015 but only just announced.

“Our preliminary estimates show that the moon’s orbit seems to be edge-on, and that means that often when you look at the system you are going to miss the moon because it gets lost in the bright glare of Makemake,” said Dr. Alex Parker of the SouthWest Research Institute in a statement.

Makemake has puzzled astronomers previously, because it appeared to have patches warmer than the rest of the icy world. However, it now seems likely that these “patches” were in fact detections of MK2 in telescopes unable to separate the two worlds. MK2 is warmer than its parent because its surface is very dark, absorbing more heat. The difference in color may be a result of MK2 having too little gravity to hold onto the methane, which most of the time remains frozen on the surface of Makemake, but may sometimes turn to gas.