The lack of water on Mars is quite obvious since the red planet looks like a desert. We know that there’s some brine flowing near the equator and some water erosion across the planet, but how dry is Mars actually?

An international team of researchers was able to estimate the weathering rates of Martian rocks due to water vapor in the atmosphere. Their work, which is published in Nature Communication, shows that today it takes 10 to 10,000 times longer for rocks to be eroded on Mars.

Since life as we know it requires water to survive, these findings tell us that if microbial life exists on Mars, it is unlikely to be located near the surface.

“Evidence shows that more than 3 billion years ago Mars was wet and habitable. However, this latest research reaffirms just how dry the environment is today,” said lead author Christian Schröder, from the University of Stirling in the UK, in a statement.

“For life to exist in the areas we investigated, it would need to find pockets far beneath the surface, located away from the dryness and radiation present on the ground.” 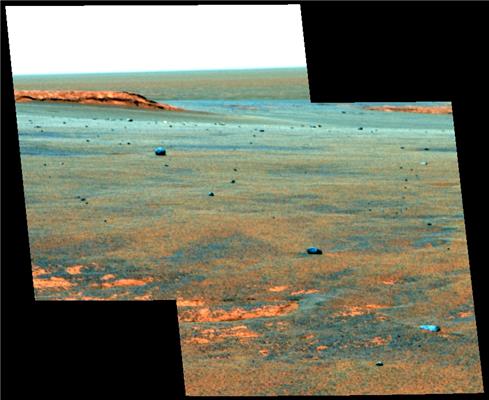 The team used data from NASA’s Opportunity rover to investigate the weathering of the Martian surface. They looked at meteorites in the Meridiani Planum, a vast plain just south of the planet’s equator.

The study looked at the chemical erosion of meteorites. Thanks to the low density of the Martian atmosphere, they can get to the ground fairly intact, and based on their size and location it is possible to estimate when they fell onto the Red Planet.

The location is similar in latitude and conditions to Gale Crater, which is being currently investigated by NASA’s Curiosity rover. Last year, data from Curiosity supported the idea that there was enough humidity for water to condense overnight.

“But, as our data show, this moisture is much less than the moisture present even in the driest places on Earth,” added Dr Schröder.