Ah, meerkats. These small carnivorous critters, more mongoose than cat to be fair, delight many with their adorable postures and mischievous antics. As a new study in Scientific Reports reveals, it turns out that this inherent cuteness masks the fact that the females of the group can actually be fairly terrifying – at least to the males.

So-called “mean girl” meerkats – alpha females that dominate their familial packs – have been found by researchers at Duke University to have far more testosterone than their male counterparts. In fact, based on stolen serum samples from dominant females, some of them have twice as much as the men.

Not coincidentally, these extreme spikes in testosterone strongly correlate with how outright aggressive and macho they behave towards others. Leading their mob (yes, that’s the collective noun), these females rule with an authoritarian style.

They steal food from others with reckless abandon, banish females that are found to be pregnant, pick their mates whenever they wish to copulate, and even murder the pups of other females. Clearly, when you play the Game of Meerkats, you win or you die.

This strategy pays off – these longer-living monarchs tend to produce around 80 percent of the surviving litters.

“Female meerkats are strongly hormonally masculinized,” the authors note in their study. Essentially, then, these ferocious females become tin-pot dictators.

Although other female creatures are known to have unusually high levels of testosterone, meerkats appear to be the only known animals to have conventional sex hormone patterns reversed. However, as a second study in the journal Biology Letters – and also from Duke University – has pointed out, this massive testosterone surge does not come without a price. 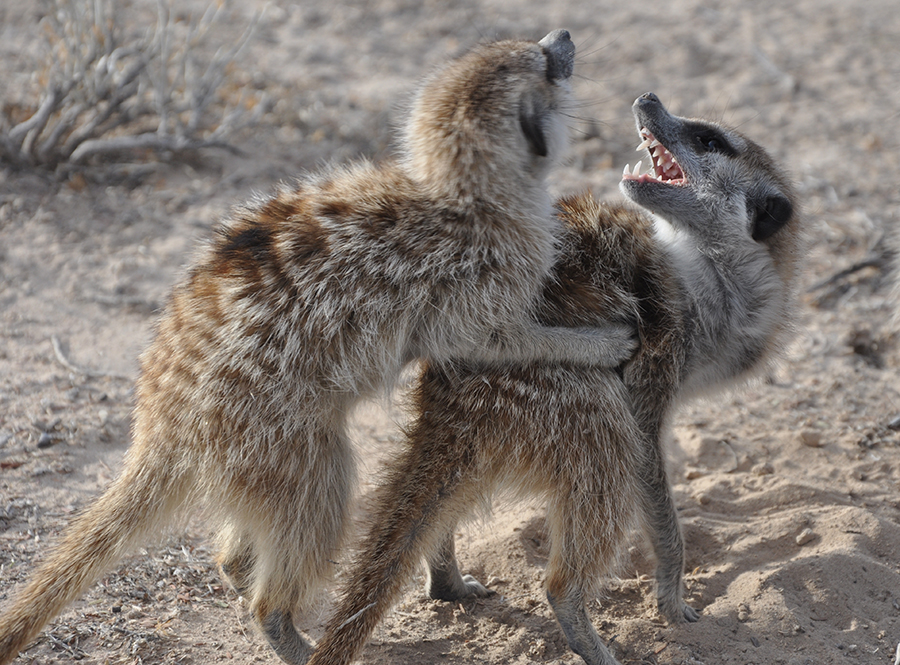 A dominant female asserts her power over a lesser meerkat. Charli Davies/Duke University

An intrepid graduate student tasked herself with collecting meerkat poop from 37 wild females living in South Africa’s Kalahari Desert over the course of an entire year. She found that those females that had the highest levels of testosterone also had the most gut-based parasites emerging from their droppings.

This, among other things, is a sign that they have a weaker immune system than others in their clan. It’s not clear why high testosterone levels may cause this negative effect, but it could be linked to antibody suppression.

“It could be that the hormones dampen the immune system, making it harder to keep parasites in check,” lead author Kendra Smyth, the poop-collecting graduate student, said in a statement.

Still, it appears that this trade-off works well for these domineering females, considering they produce huge litters of males and females, the latter of which often go on to lead their own meerkat mob. Unless they’re assassinated by an eagle or a jackal, it looks like there’s no stopping them – not even a plethora of parasites.