A potential new option in male contraception has proven effective, if not yet safe, in animals. Vasalgel works not through hormonal control, but by creating a reversible obstacle to sperms' path.

The complaint that women always seem to be stuck with the responsibility for contraception is longstanding. Comparing condoms and vasectomies on one side with the array of technologies on the other, many have wondered if researcher gender imbalance might be contributing.

The makers of Vasalgel hope to change this, providing something more reliable than condoms (which, while highly effective when used perfectly, have an 18 percent failure rate over a year in typical use) and more reversible than vasectomies.

Vasalgel is intended to act as an easily reversible vasectomy. A gel is injected into the vas deferens, blocking sperm from reaching the ejaculatory duct. The gel is made of either styrene-alt-maleic acid (SMA) dissolved in dimethyl sulfoxide, or an 80/20 mix of SMA acid and SMA anhydride.

In a preclinical trial study on rabbits published in Basic and Clinical Andrology, lead author Professor Donald Waller of the University of Illinois, Chicago reported that 11 out of 12 rabbits successfully treated in this way had no measurable sperm in their semen, and remained that way for 12 months. The twelfth rabbit released some sperm initially, but subsequently became able to enjoy the pleasures of rabbithood without any danger of fathering baby bunnies.

“Results from our study in rabbits were even better than expected,” Waller said in a statement. “Vasalgel produces a very rapid contraceptive effect which lasted throughout the study due to its unique hydrogel properties.” Disturbingly however, the paper reports that three other rabbits died “apparently from surgical trauma as the operative technique was being refined.” The authors argue that human anatomy makes the vas deferens easier to access than that of rabbits. 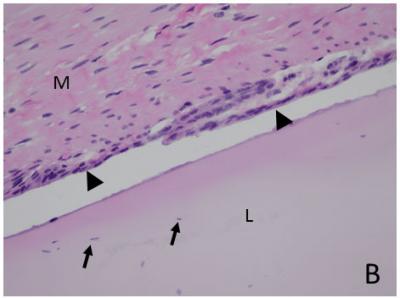 The contraceptive gel (lower right) and the walls of the vas deferens (upper left) under 400X magnification. Christopher Premanandan, The Ohio State University

The paper notes that, “An estimated 85 million unintended pregnancies occur annually worldwide, with half ending in abortion and 13 percent in miscarriage.”

Several alternative male contraceptives are being investigated, but most are hormonal, and therefore, likely to lead to side effects and possible health risks. A sperm-blocking switch reported earlier this year might prove more permanent than intended.

Unlike some alternative mechanisms for blocking the passage of sperm through the vas deferens, Vasalgel remains soft. This decreases the chance of side effects that have been observed on other occasions. By allowing small molecules to pass through, Vasalgel also prevents the build up of hydrostatic pressure, while blocking anything as large as sperm.

A similar gel, based on SMA anhydride, has been trialed in India and has been found to be reversible in animals. The authors argue that Vasalgel can be made more simply and is likely to be more stable in the long term.

Research sponsors, the Parsemus Foundation, claim that around half of men have indicated they would be willing to use new male contraceptive technologies if they are shown to work, although this varied greatly by country. Women in the same studies were positive about long-term partners using such methods.