King Arthur was a legendary British monarch who is said to have roamed the fields of England around 1,500 years ago. Although the wizard Merlin and the magical sword Excalibur were probably more fiction than fact, there is a chance that Arthur himself was real, and archaeologists in Cornwall have uncovered some evidence that maybe, just maybe, suggests that the legend of his birth may be true.

As the story goes, Arthur was conceived at a palace in Tintagel after an ancient British King and the visually striking wife of a local ruler illicitly got together. There’s been no direct evidence that this took place apart from references to it in several younger texts.

As reported by The Independent, English Heritage-funded archaeologists have uncovered the walls of a destroyed palace from the Early Middle Ages in southwestern England. It is considered highly likely that this was once the main residence of a 6th century ruling family presiding over a southwestern British kingdom named Dumnonia.

Significantly, the site at Tintagel matches up, chronologically and geographically speaking, with the Arthurian birth legend. However, the team haven’t yet found a “smoking gun” – there is currently no clear evidence that the future king was born here, or, of course, that he existed at all.

In any case, these ruins are a major archaeological find. They’re the first substantial buildings found in Britain dating back to the 5th and 6th centuries. About a dozen have been found, all together containing a plethora of pottery, glass, and – most importantly – implements and vessels that show they were of a truly elite status. 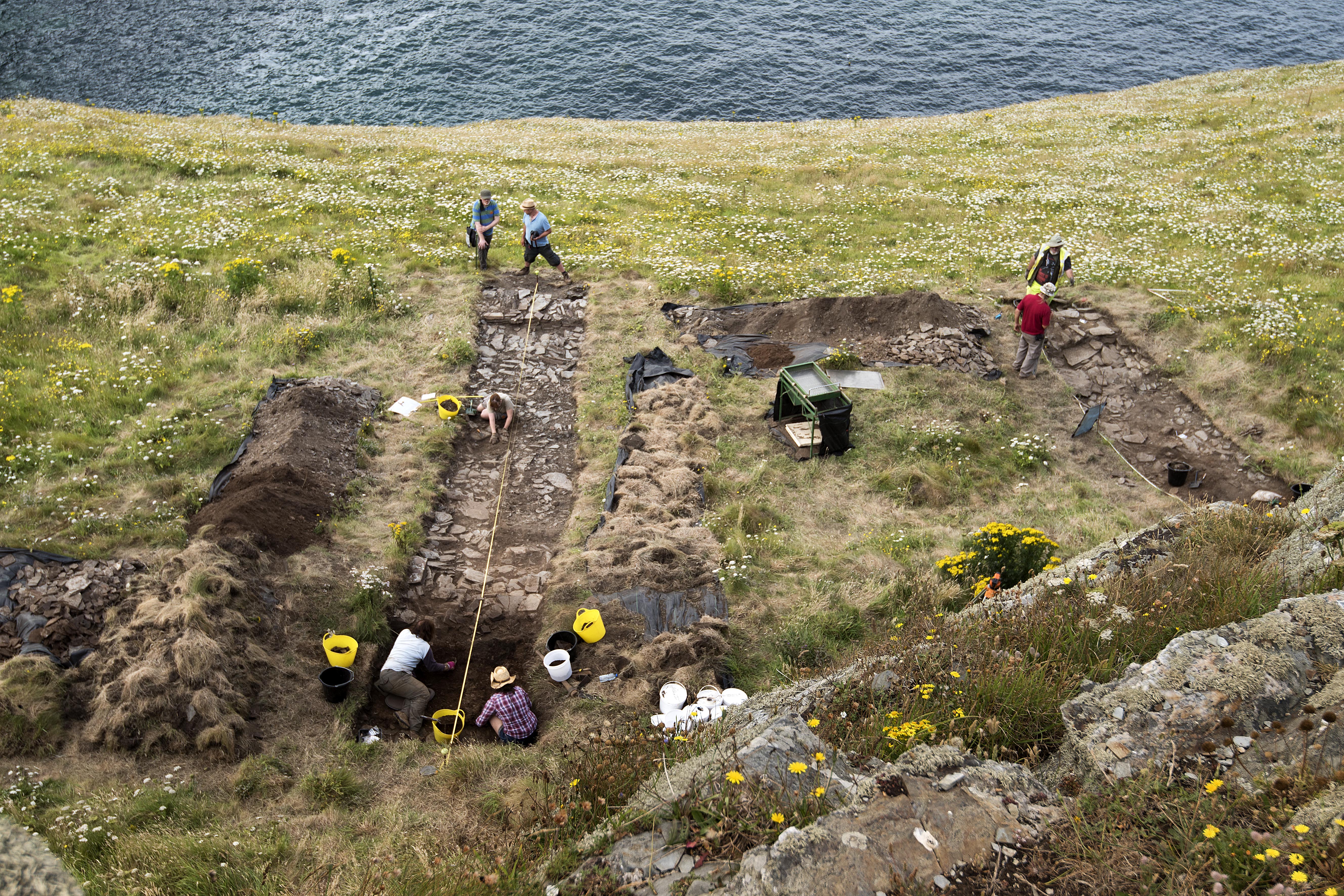 Wine from western Turkey, olive oil from the Greek Aegean, and fine bowls from North Africa were clearly enjoyed by the potentially royal occupants of the palatial complex. Immaculately painted French-made glass cups were also found all over the site, which may have housed artisans, soldiers, entertainers, and cooks.

Back then, much of central-eastern Britain was under the control of Anglo-Saxon invaders, whereas the eastern regions, including Cornwall, were still within a native British dominion.

This means that the residents of Tintagel would have likely taken advantage of the trade routes available to them via the Mediterranean, which were controlled by the Byzantine Empire, the continuation of the Roman Empire that had fallen to the Germanic barbarian hordes. Italy, North Africa, and Spain were theirs, and they were openly trading with the nativist parts of Britain. 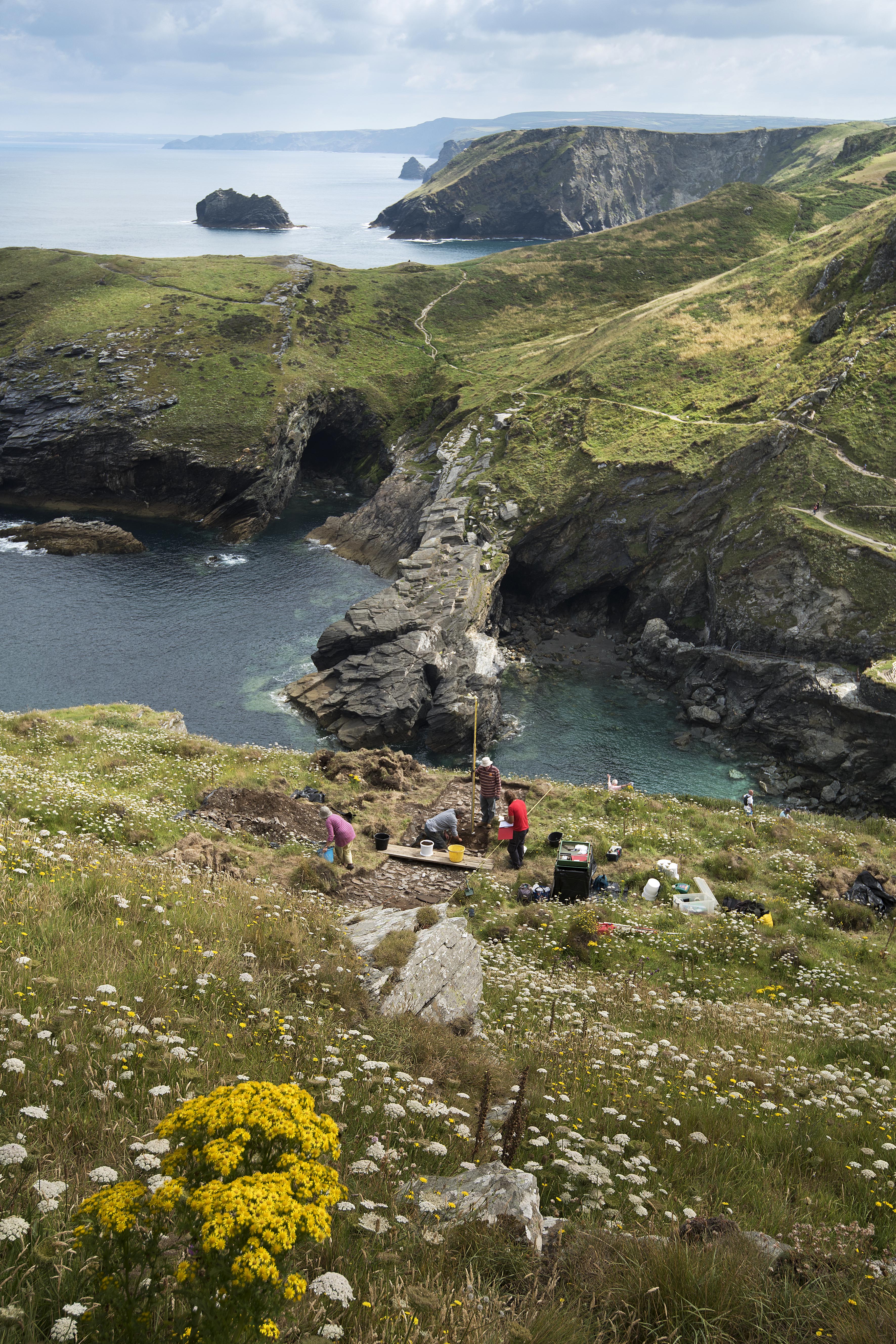 The complex appears to have fallen into disrepair around the 7th century, which coincides with the appearance of a plague that tore through the region after culling millions of people across the Mediterranean. So, instead of fleeing from war or persecution, Tintagel’s regal residents likely fled due to the spread of disease. Perhaps they never made it out alive.

In relation to the Arthurian legends, the geography of the palace is significant. King Arthur was said to have led the defense of Britain against Anglo-Saxon forces in the 6th century, and this palace would have served as a safe haven surrounded by friendly territory – and as a base from which to plan military operations. Legend has it that he killed 960 men single-handedly in the Battle of Badon, which was credited as a major victory for the Britons.

Unfortunately, this summer’s excavation has now come to an end, and no Arthurian engravings or remains have been found. Indubitably, the legend of King Arthur will inspire debates and daydreams of dramatic times long gone for many decades and centuries to come.

Humans
TWIS: Hubble And JWST Team Up To Gaze At DART, Webcam Footage Shows The Devastation Of Hurricane Ian, And Much More This Week

TWIS: Hubble And JWST Team Up To Gaze At DART, Webcam Footage Shows The Devastation Of Hurricane Ian, And Much More This Week

Our Ancestors May Have Used Baby Slings 10,000 Years Ago, Ancient Infant Burial Reveals

Our Ancestors May Have Used Baby Slings 10,000 Years Ago, Ancient Infant Burial Reveals