The question of life on Mars is arguably the greatest of our time. And we’re getting very close to an answer – much closer than you might think.

Mars has gripped us for decades, with science fiction authors of old imagining this world might be inhabited by intelligent beings like us. Scientists in the mid-20th century, too, thought at one point that Mars might have vegetation or other living matter on its surface. Their dreams were quashed when NASA’s Mariner 4 spacecraft returned the first images of Mars in 1965, revealing it to be a desolate world.

But the allure remains, mostly because our neighbor appears to have had Earth-like conditions in its distant past. It seemingly had all the necessary ingredients for life too, albeit probably only microbial life, so if it didn’t exist there, just how unique is our planet?

“If you somehow rule out any sign of biological activity on Mars, then you start having to think Earth must be really special,” said Monica Grady, professor in Planetary Sciences at the Open University, to IFLScience. Grady hosted a show on BBC Radio 4 in the UK this Monday called Hunting the Martians (available to listen online), as part of the BBC’s Mars Week taking place from March 4 to 10.

“If this chemistry hasn’t gone on on Mars, what’s stopping it?” Grady continued. “Then we’ve got to think, okay, our best hope of finding life in the Solar System has gone. We’d better start thinking we are alone in the Solar System, and therefore we have a custodial duty as much as anything else.”

To find out for sure, a variety of missions have been searching for signs of habitability, with more upcoming in the future. In 1976, NASA searched for life on Mars for the first time with its Viking 1 and 2 landers, with inconclusive results. Following a hiatus in Mars exploration, the turn of the century then saw us begin to get a greater grasp on what happened to Mars and what it’s like today.

The Phoenix Lander in 2008 discovered that there was frozen water beneath the surface, a ground-breaking discovery that hinted at vast reserves of ice underground. And after the Curiosity rover landed on Mars in August 2012, we discovered that its landing site – Gale Crater – was once the location of an ancient lake.

Missions like the Mars Reconnaissance Orbiter (MRO), meanwhile, have helped us map the surface and find areas of interest, and ESA’s Trace Gas Orbiter (TGO) spacecraft is about to start hunting for methane on the surface that may have a biological origin.

Coupled with a source of energy – the Sun – and organic compounds on the surface, Mars is thought to have all the key ingredients for life. But the main question remaining at the moment is whether life has actually evolved there, and if it can still survive today.

Mars seems to have gone through a habitable period much earlier than Earth. Some estimates suggest it had more water than the Arctic Ocean 4.3 billion years ago, when it had a thicker atmosphere and the Sun was brighter than it is now, so the planet was warmer.

However, the Red Planet subsequently lost its magnetic field for reasons unknown, with its atmosphere slowly being eroded by the Sun. This led to the barren world we see today, where water cannot exist on its surface without being boiled away by the low pressure.

“The conditions for life on Mars would have got going more quickly than on Earth,” said Grady. “So that immediately makes you think, right, there’s been rivers on Mars, maybe there’s been life there.”

To investigate exactly what happened to Mars, two upcoming rovers should give us our best look at life on the planet yet. One is ESA’s ExoMars rover and the other is NASA’s Mars 2020 rover, both due to land on the Red Planet in early 2021. NASA is currently thinking about where to land its rover, with three locations being considered.

One of the locations is Jezero Crater in the northern hemisphere, a dry ancient lake fed by a river that may hold clues about many different rock types in Martian history. Another is Columbia Hills, the same location NASA’s Spirit rover landed in 2004, which thanks to Spirit we know could have been habitable. And the last is Northeast Syrtis, a region shaped by volcanic activity that could have driven circulation of hot water through rocks, perhaps providing a setting for life to exist. 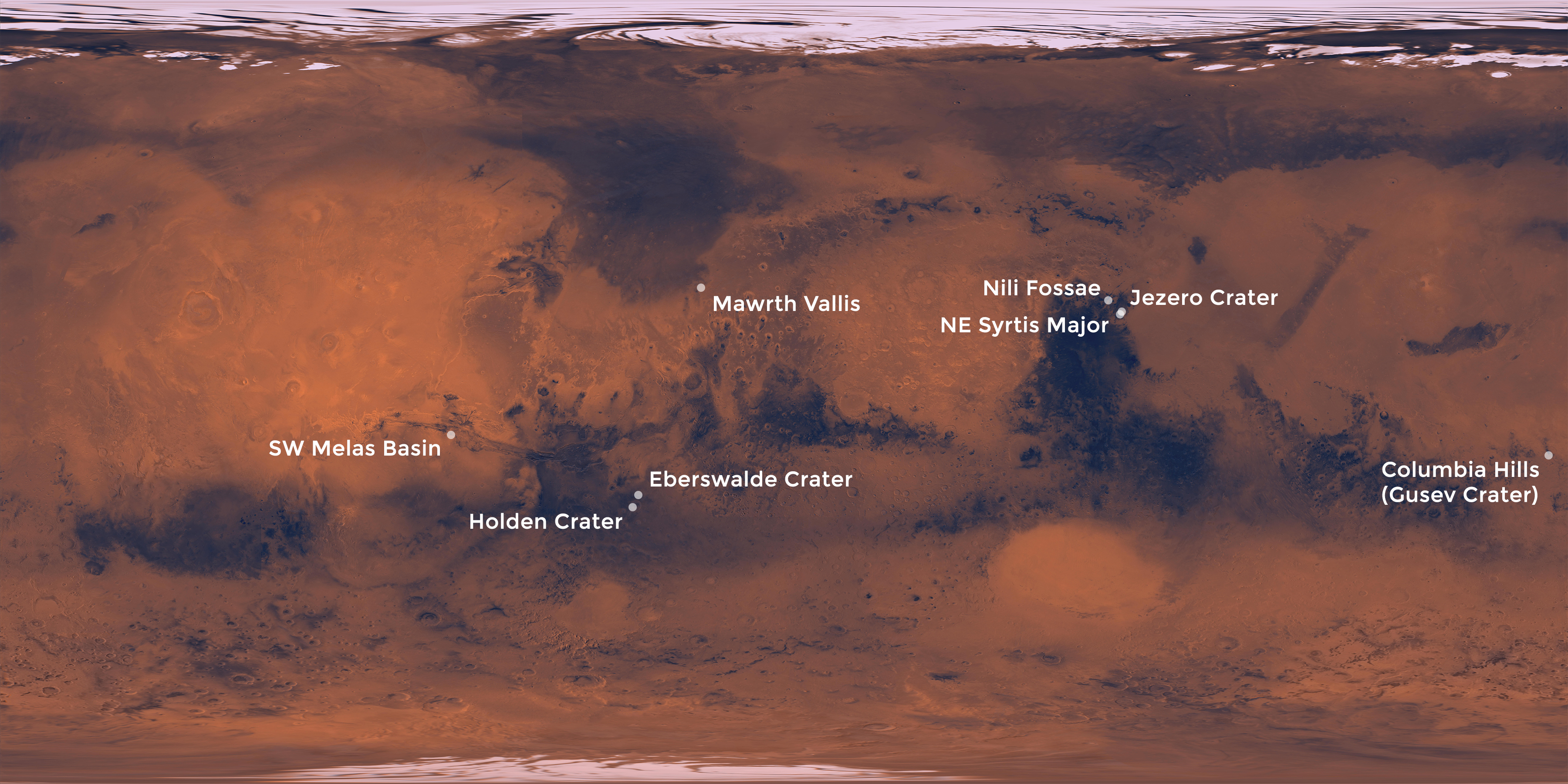 Eight proposed landing sites for Mars 2020, of which only three (Jezero Crater, Columbia Hills, and Northeast Syrtis) are still being considered. NASA

“The landing site must be an ancient site more than 3.5 billion years old that could have once supported life, if it ever existed on Mars,” Ken Farley, project scientist for the Mars 2020 mission, told IFLScience. “We want a site that, in addition to having once been habitable, has rocks that could have preserved evidence of [life’s] presence, if it were there.”

All three of those locations fit the bill, with Columbia Hills having a “special attraction” according to Farley, as we know of an ancient hotspring deposit there that could have been a habitable environment. Each are interesting for their own reason, though – and each will tell us more about the past and present habitability of Mars.

One goal of the Mars 2020 rover will be to store samples in cores that could be returned to Earth by a future mission. A Mars sample return mission would be a key advance in our understanding of the planet, with the next step being manned missions. Until those happen, however, we’ll have to piece together as much as we can about this world from rovers and orbiters.

But while the question of life on Mars remains an open one, it is one we could solve soon. The TGO will begin science activities in October this year, and it could very quickly provide answers about the origin of methane and other gases. If it doesn’t, we’ve still got ExoMars and Mars 2020 to look forward to in four years.

So, the search for life on Mars continues. And it may not be too long before we find out if we are alone in the Solar System or just one of several inhabited worlds.