Two scientists have come up with a novel proposal to send a fleet of spacecraft to our nearest star, Proxima Centauri, and return to Earth – possibly with the first ever samples of an exoplanet’s atmosphere.

The idea is based upon Breakthrough Starshot, an $100 million initiative set up by Russian billionaire Yuri Milner last year to use a powerful 100-gigawatt laser on Earth to send small spacecraft to Proxima. Starshot could theoretically traverse the distance of 4.2 light-years to Proxima Centauri and its potentially Earth-like orbiting planet, Proxima b, in just 20 years, traveling at 20 percent the speed of light.

But a major drawback to Starshot’s plan is that, once the spacecraft arrived at Proxima b, it would fly past the planet in a matter of seconds. The so-called nanocraft would have just a brief window to return images and data to Earth, being propelled by the laser impacting a large 10-meter-square sail, but with no way to slow down.

Instead, this latest proposal published in The Astrophysical Journal Letters today – penned by René Heller from the Max Planck Institute for Solar System Research and IT specialist Michael Hippke, both in Germany – would place a spacecraft in orbit around Proxima b for a year or so. This would give it ample time to study a planet in the system, before returning to Earth.

“A flyby mission is only a few seconds,” Hippke told IFLScience. “So wouldn’t it be really cool if we could stop there?”

To do this, they envisage using photogravitational assists to speed up and slow down the spacecraft, taking a lot longer than Starshot’s plan – more than 100 years – but with a much greater scientific return.

A photogravitational assist would involve using the photons emitted from our Sun to speed up the spacecraft. Traveling at 4.6 percent the speed of light, it would take 95 years to reach two stars that form part of a triple system with Proxima Centauri, Alpha Centauri A and B. The photons from these stars, combined with their gravitational pull, would be used to slow down the spacecraft, and place it in orbit around Proxima b 46 years later. 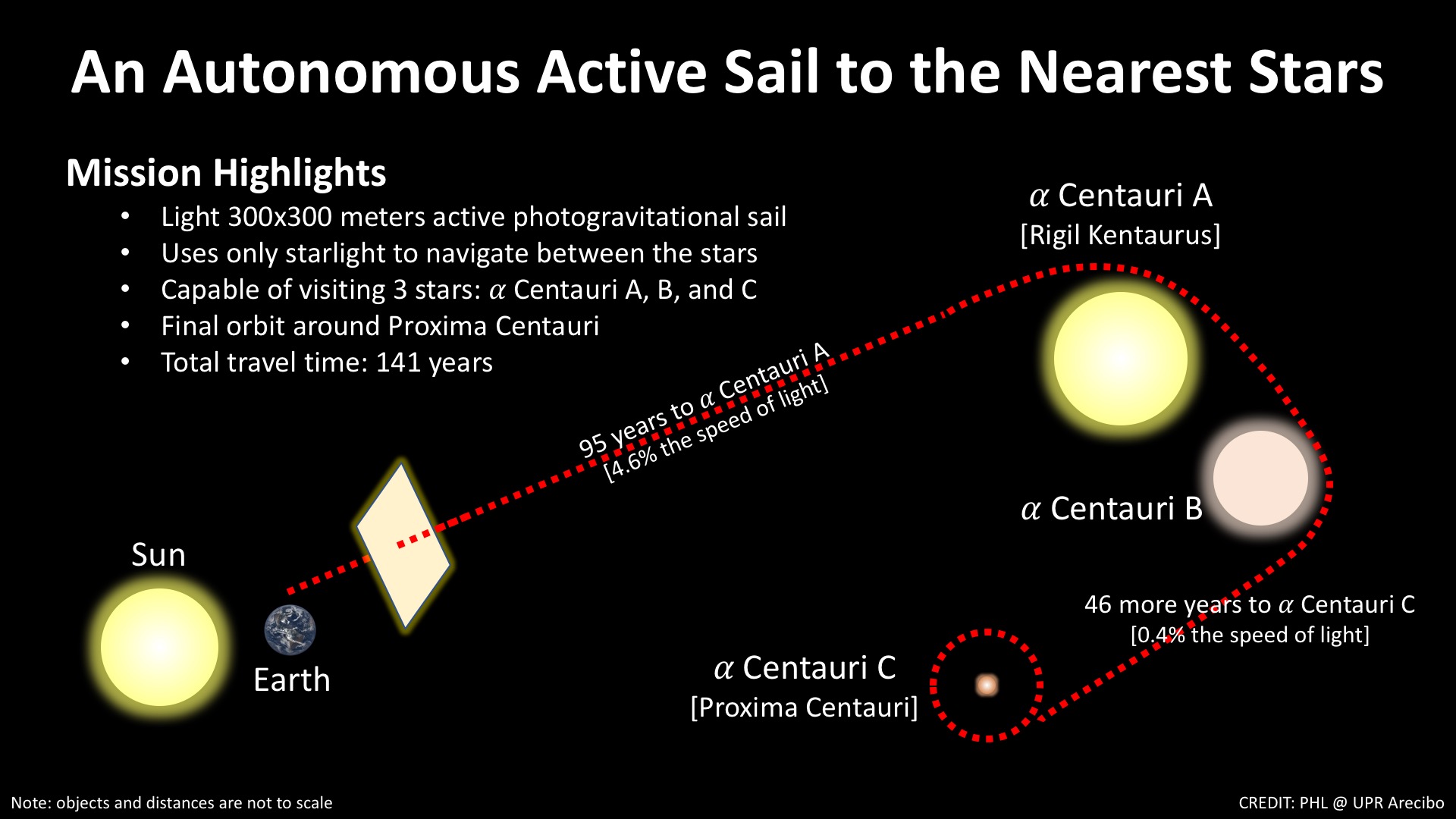 How the mission would play out. Planetary Habitability Laboratory, University of Puerto Rico at Arecibo

Although a much longer time scale than Starshot’s idea, their proposal would not require a large laser to be built on Earth. Using sails designed around graphene, the photon pressure from our Sun alone would be enough to complete the journey, according to the authors.

“The laser has a few serious issues,” said Hippke. “When you start the laser, water vapor evaporates in our atmosphere and it becomes intransparent. Some argue it is not possible to build it on Earth because it is reflected from our atmosphere. You could build it in space, but the biggest issue then would be political, having a laser in space that could destroy every city in the world.”

Heller and Hippke’s proposal, though, is only possible when a rare alignment of the three stars occurs, to maximize the photogravitational effect. The next time this will happen is in 2035, and the next will not be until 2115. If the spacecraft launched in the former window, it would thus enter orbit well into the 22nd century; in the latter, the 23rd century.

This is clearly an obstacle to getting interest in the mission. When he announced his proposal last year, Milner said he wanted to see Starshot happen in his lifetime. Switching to this other idea would mean that no one alive on Earth today would likely see its completion. 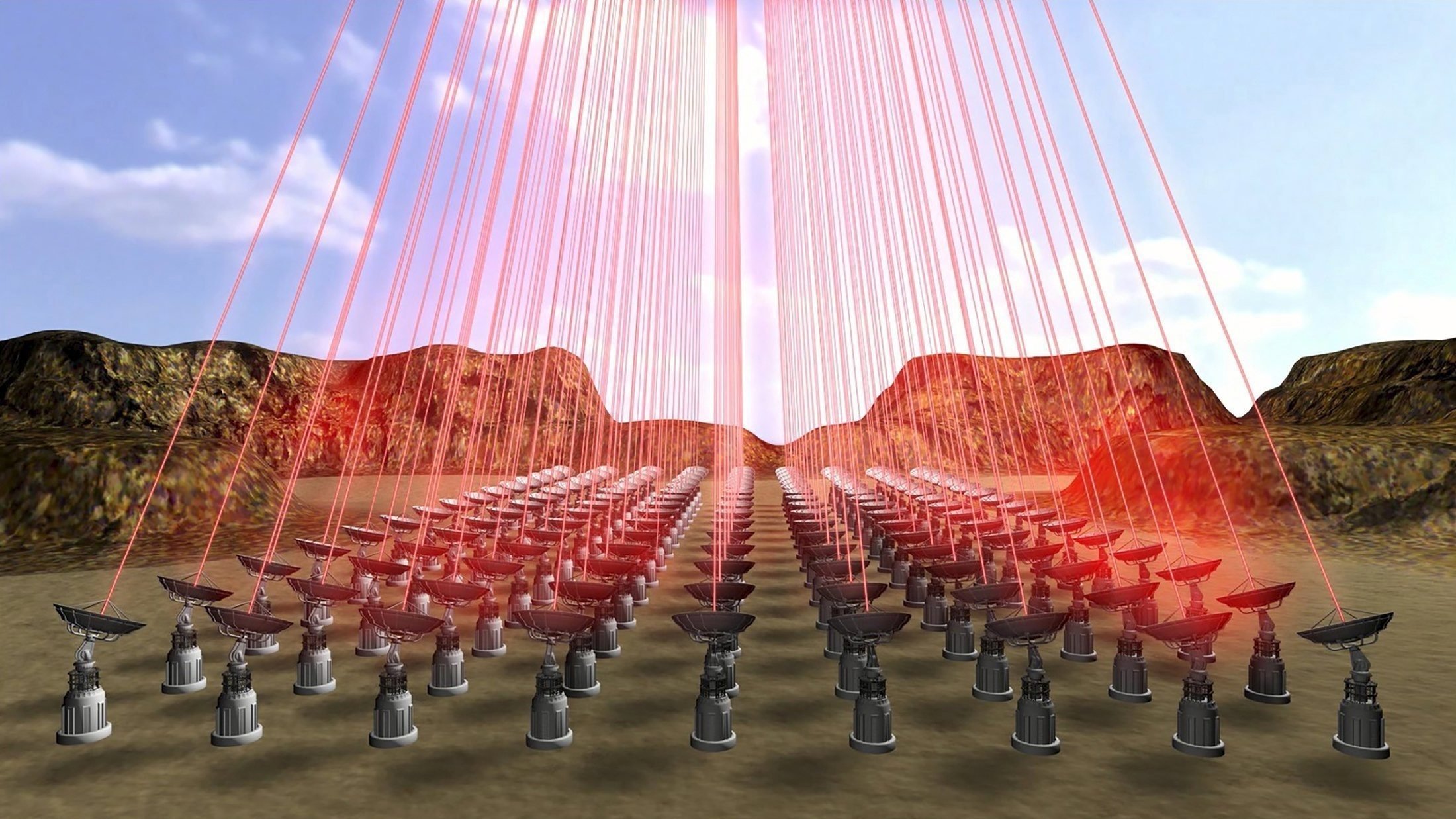 Starshot's idea requires a massive laser to be built on Earth. Breakthrough Starshot

“The main constraint in defining the Starshot concept was to visit Alpha Centauri within our lifetime,” Avi Loeb from Harvard University, chair of the Advisory Committee for Starshot, told IFLScience. “Extending the travel time beyond the lifetime of a human, as advocated in this paper, would make it less appealing to the people involved.”

Loeb also noted that the design of Heller and Hippke’s spacecraft might pose problems. Their sail would weigh less than 100 grams (3.5 ounces), and would be only a few atoms thick, meaning it might be unlikely to survive passing close to our Sun or one of the other stars. “[It’s similar] to the mythological story of Icarus, who dared to fly too close to the Sun,” said Loeb.

(It should be noted that the authors have addressed this issue, saying that graphene can survive relatively high temperatures, and with a coating the sail would also reflect most of the incoming radiation, so it could theoretically survive.)

That’s not to say it is not an intriguing proposal. Entering orbit around Proxima b, the spacecraft could spend a year studying and imaging the planet, and possibly even collect samples of the gas in its atmosphere. Once the mission was concluded, the spacecraft would use its sail to make the journey back to Earth in the same manner it arrived, and on a similar time scale – a round trip of about 300 years.

Owing to the large distances between us and Proxima, the spacecraft would be largely autonomous, as two-way communication would take almost nine years. A small 1-watt laser on board would be used to send data back to Earth, and this same laser could be used for small course corrections as the spacecraft traveled to the star and entered orbit around the planet.

And to increase the chance of success, Heller and Hippke suggest that multiple spacecraft could be sent, anywhere between 10 and 10,000. Some of these could be sacrificed en route to ensure the mission’s success. For example, to perform a photogravitational assist, the spacecraft must tilt their sails against a star once they fly past, to prevent the photons speeding it up again. This limits their field of view, so some spacecraft could be pointed forwards to plot the trajectory.

The cost of such a proposal isn’t clear, although without the need to build a huge laser on Earth, it could be argued it would be a lot less than Starshot’s idea. The biggest hurdle would be developing the sail itself, which would need to be thin and light enough to keep the weight of the entire spacecraft to under 100 grams. For this reason, the authors proposed using some sort of graphene-inspired material, although the best composition isn’t yet known. 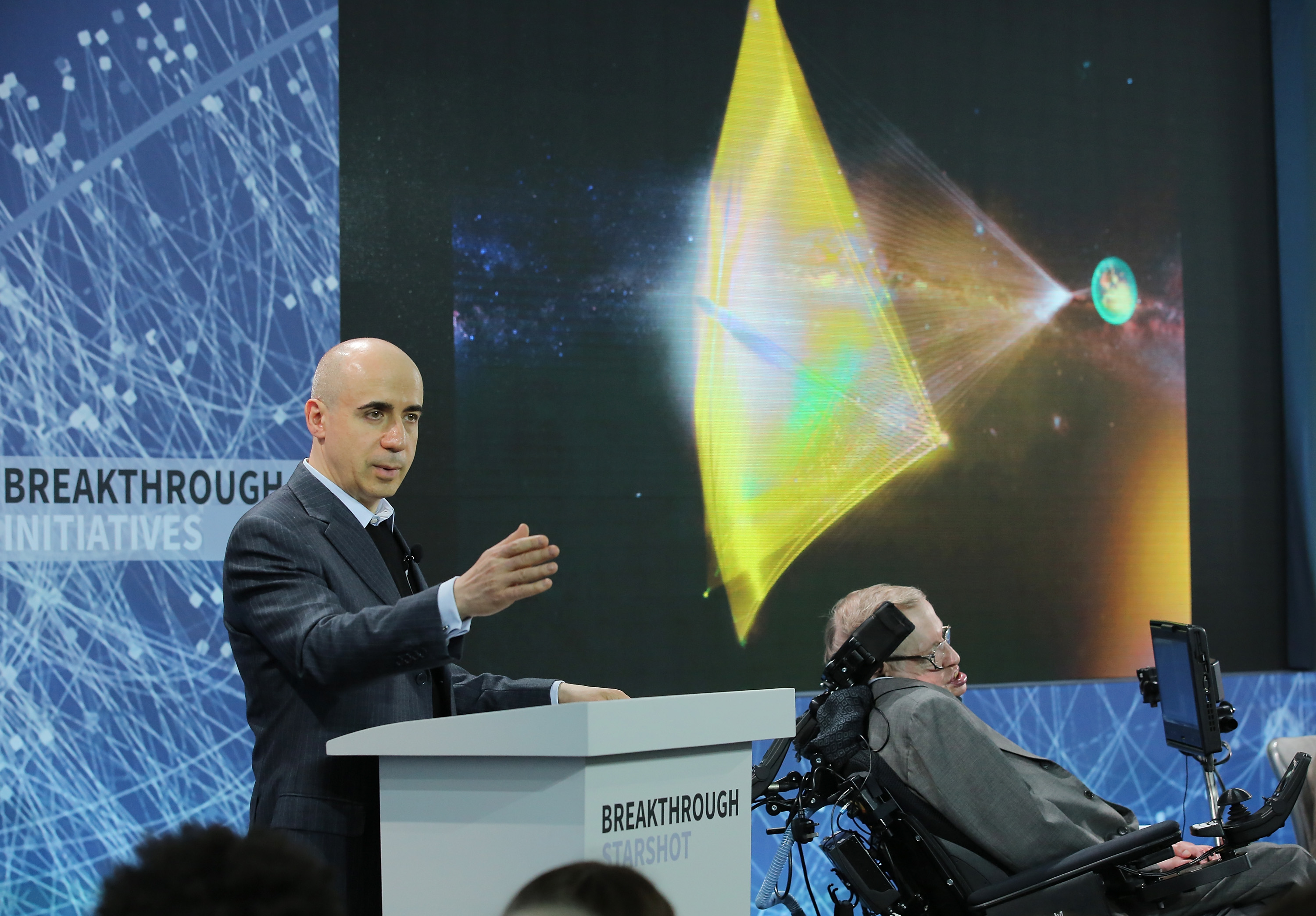 There’s perhaps another incentive, too. These sails would be large, spanning several tens of meters in size with their sails. Once in orbit around Proxima b, they would likely occasionally flash with the light of the star. If there was intelligent life on the planet, it’s possible they would notice the spacecraft.

“As the sail approaches their stellar system, they would notice a new star in their skies, which would have almost precisely the same electromagnetic spectrum as their host star," the authors noted in an online Q&A.

“In principle, if these potential inhabitants of Proxima b were able to identify the sail as being artificial, they might conceive of a way to deliberately betray their presence to the cameras aboard the sail.”

Is it a bit fanciful? Sure. But the technology involved is not too far-fetched. Whether an agency or organization would commit to a mission lasting more than 100 years is another question, but there’s little doubt the scientific return for our descendants would be tremendous.