A comet hailing from the edge of the Solar System has been caught breaking apart by NASA's Hubble Space Telescope. The incredible sequence of images shows building-sized chunks of the icy rock trailing behind its much larger core in our best view ever of such an event.

The images were taken over three days in January 2016. The 4.5-billion-year-old comet, called 332P/Ikeya-Murakami, originated in the Kuiper Belt beyond Neptune, but its orbit has since been shifted by Jupiter’s gravity to bring it in much closer to the Sun. A study on the comet, led by the University of California at Los Angeles, appears today in the Astrophysical Journal Letters.

In the images, the core of the comet is the bright object to the left, measuring about 480 meters (1,600 feet) across. On the right are huge chunks 20 to 60 meters (65 to 200 feet) wide that have broken off, comprising 4 percent of the comet. The team behind the discovery think the break up happened between October and December 2015, although the exact mechanisms behind it are not completely understood.

"In the past, astronomers thought that comets die when they are warmed by sunlight, causing their ices to simply vaporize away," said lead researcher David Jewitt of the University of California at Los Angeles in a statement. "But it's starting to look like fragmentation may be more important. In Comet 332P we may be seeing a comet fragmenting itself into oblivion."

These images, taken over three days, show the chunks (right) drifting away from the core (left). NASA/ESA/D. Jewitt (UCLA)

This is one of the most detailed observations of a comet break-up ever seen, with the debris now spread over 4,800 kilometers (3,000 miles) behind the comet. The chunks are slowly moving away from each other at just a few miles per hour, although the entire comet itself is moving at 80,000 km/h (50,000 mph) relative to the Sun.

One possible cause of the break-up might be the rapid rotation of the comet; it completes a rotation once every two to four hours. But as sunlight heats up the surface, jets of gas and dust quicken this spin-rate, causing huge chunks of material to come loose.

Hubble also spotted another large chunk of material near the comet, which may be a remnant from another break-up in 2012. In fact, this chunk may be a similar size to 332P, suggesting the comet may have split into two pieces in the past.

The most detailed view of a comet break-up until this was 73P/Schwassmann-Wachmann 3 (73P), seen in April 2006. 332P will give us a new insight into the evolution of comets, but it’s not all good news; Jewitt estimates the comet may be completely gone in 150 years.

“The trip to the inner Solar System has doomed it,” he said. 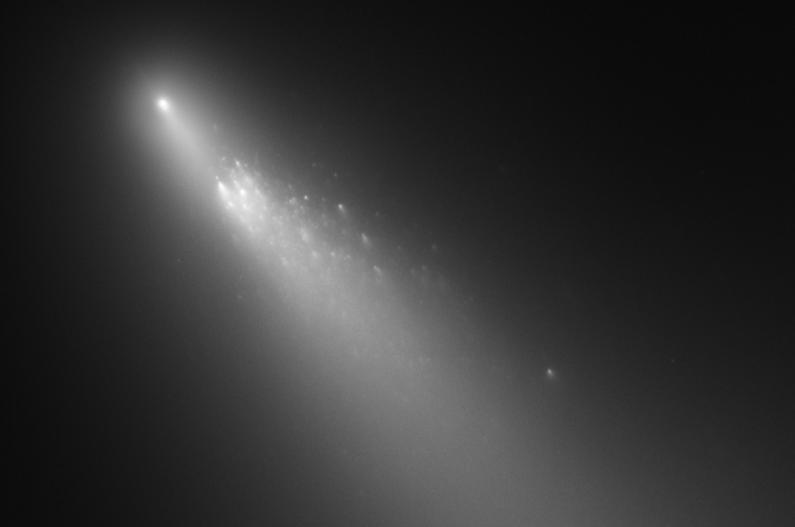