Over a week after Schiaparelli's fateful crash-landing, we are getting a clearer picture of what happened to the European lander when it failed to touch down on Mars.

In newly released photos, snapped by NASA's Mars Reconnaissance Orbiter on October 25, the resting place of the Schiaparelli lander, its parachute, and its heat shield have all been found.

The images, taken by the High-Resolution Imaging Science Experiment (HiRISE) camera, shows that the three impact locations are within 1.5 kilometers (0.9 miles) from each other as expected.

The lander impact is located to the left of the image and shows some unusual features. The impact crater is 2.4 meters (7.9 feet) across and it corresponds to what’s expected for a 300-kilogram (660-pound) object plummeting at more than 300 kilometers (186 miles) per hour. 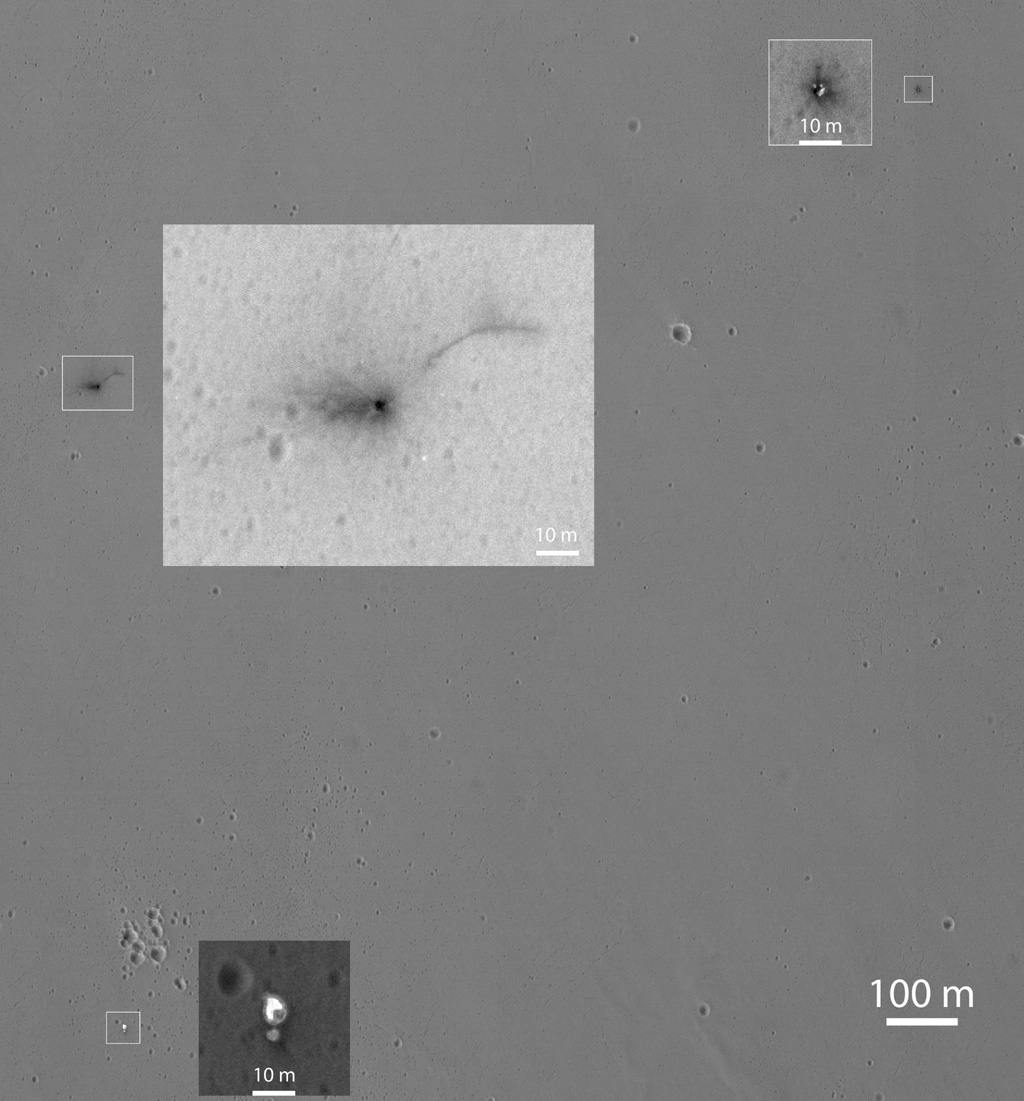 The image shows what remains of the Schiaparelli lander, parachute, and heat shield. NASA/JPL-Caltech/Univ. of Arizona

The crater is surrounded by dark radial markings towards the west and there’s also a long dark line north-east of the crater. As the probe was descending almost vertically from 2 to 4 kilometers (1.2 to 2.5 miles) of altitude, there should be markings all around the crater. Their formation will be investigated, but according to the European Space Agency (ESA), it is possible that the propellant tanks exploded in a certain direction upon impact.

About 1.4 kilometers (0.8 miles) east from what remains of the lander, HiRISE was able to see the front heat shield that was ejected, as planned, two minutes before impact. The image shows a dark crater and several bright features that are likely reflections from the multi-layered thermal insulation.

The southernmost location has been confirmed to be the landing site of the parachute, which is clearly visible as it is much brighter than the surrounding Martian terrain. Also visible in the zoomed-in image is the back shell, which was attached to the spacecraft.

The ESA team believe that the parachute was jettison too early and the retro-rockets fired for only a tenth of the planned time.

The European scientists are still analyzing the data collected by its fully functioning orbital counterpart, the Trace Gas Orbiter, and hope to find out what happened to the Schiaparelli in the next few weeks.