How cheap can solar power get? We don't know yet, but the astonishing fall in the price of solar panels is clearly only going to continue with the announcement that perovskite solar cells have broken the 20 percent efficiency mark. The announcement comes just two days after leading researchers described perovskite as the future of solar power and probably electricity generation in general.

There are many ways to produce electricity from sunlight, but the market for solar power is dominated by silicon crystal cells. Most alternatives are substantially less efficient or ridiculously expensive. In the last few years, however, there has been intense speculation about cells made from perovskite, a class of crystals with a structure mimicking naturally occurring calcium titanium oxide. Perovskite does not need the high-temperature processing that accounts for much of the cost of silicon cells.

The same is true for some other solar options, but it has taken decades for these to achieve modest efficiency gains. On the other hand, it has been only seven years since the first paper on making electricity from perovskite and sunlight, which then had an efficiency of 3.8 percent. Three years later, Oxford University's Professor Henry Snaith changed the game by showing how to make 10 percent efficient cells.

Earlier this year, Snaith set another record by combining a perovskite cell with a traditional silicon module to capture 25.2 percent of the Sun's energy.

Now, Snaith has gone one better, putting two perovskite layers together to produce a cell with an efficiency of 20.3 percent, an achievement he announced in Science. Although less efficient than his silicon/perovskite combination, Snaith's latest work is closing in on the silicon record and is likely to be much cheaper to mass produce. 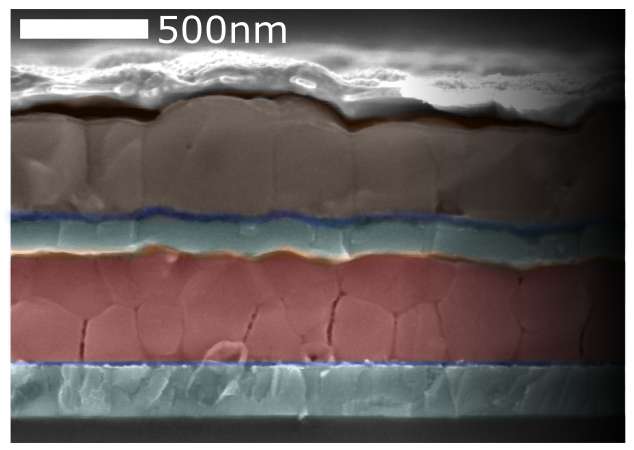 Cross-section of a new perovskite tandem solar cell. The red cell absorbs high-energy (blue) light waves, but lets through low-energy light to be collected by the brown perovskite. Giles Eperon

The great challenge of any sort of photovoltaic cell is to extract energy from as many different wavelengths as possible. Snaith made a type of perovskite that catches blue light effectively, but lets most red light through, and printed a layer of it on glass. This was stacked above a different type of perovskite, one which is effective at trapping red light.

Although blue light-specialist perovskites have been around for some time, it took Snaith's co-author Dr Giles Eperon of the University of Washington to make one suited to the red end of the spectrum. Using a combination of tin, lead, cesium, iodine, and organic materials, Eperon succeeded to the extent that his work even captures near-visible infrared light.

Besides the need to increase efficiency, the major obstacle to practical use of perovskite solar cells is that most quickly lose performance when exposed to oxygen, heat, or water. After cooking their product for four days at 100°C (212°F), Snaith and Eperon were satisfied that heat will not be a problem, and don't think oxygen will be an issue either.

The solar future touted in Nature Energy this week could be closer than even its advocates realized.

Technology
What Happens To Your Digital Footprint When You Die?