Using tools in the animal kingdom is a rare ability, something that only a few species have been able to demonstrate. It now seems that another bird is set to join this select few, as the Hawaiian crow (Corvus hawaiiensis) has been elevated to the exclusive class of tool users. Yet with only 130 of the corvids surviving, the birds are perilously close to being lost forever.

The Hawaiian crow, known locally as the 'alal?, now joins the New Caledonian crow in a crack group of expert tool users. Before the discovery of the Hawaiian birds’ prowess with twigs, however, it had long puzzled researchers as to why – despite there being over 40 species of crows and ravens worldwide – the birds confined to the remote island of New Caledonia were the only ones known to be able to manipulate and make tools to get at hard-to-reach food. One researcher started to suspect that they might not be alone.

“We had previously noticed that New Caledonian crows have unusually straight bills, and wondered whether this may be an adaptation for holding tools, similar to humans' opposable thumb,” explains Dr Christian Rutz, who co-authored the study published in Nature. After looking through all other species of corvids, the researchers quickly turned their attention to the New Caledonian’s Hawaiian brethren, which also have a curiously straight bill. Yet there was a catch: the birds are extinct in the wild.

At the time that the researchers were able to conduct experiments to test the ingenuity of the Polynesian birds, there were just 109 individuals surviving, most of which were to be found in San Diego in a breeding program. This allowed the scientists to do something unprecedented, offering them the opportunity to test almost an entire species on their ability to craft tools.

And what they found impressed them. Of the 104 birds tested (five were excluded for “health reasons”), 78 percent of them spontaneously used tools when presented with a challenge that required them to use a stick to extract food from a log.

“Using tools comes naturally to 'alal?. These birds had no specific training prior to our study, yet most of them were incredibly skilled at handling stick tools, and even swiftly extracted bait from demanding tasks,” says Dr Rutz. “In many regards, the 'alal? is very similar to the New Caledonian crow, which my team has been studying for over 10 years.” They found that the birds would select a stick, modify it with their beaks, and then use it for the task in hand.

They also found that while only 78 percent of the birds were successful, this was mainly skewed by age differences. The adults were far better at crafting tools than the youngsters, with 93 percent of the older 'alal? able to solve the puzzle, though that still left some of the birds scratching their heads at the food conundrum.

The discovery of a second species of implement-wielding corvid is an important find. It may finally help scientists tackle the question of what it is exactly that drives the birds to be able to do so, with the researchers thinking that the fact both species live on islands may be more than coincidence, suggesting that perhaps their isolated existence somehow favors this unusual behavior. 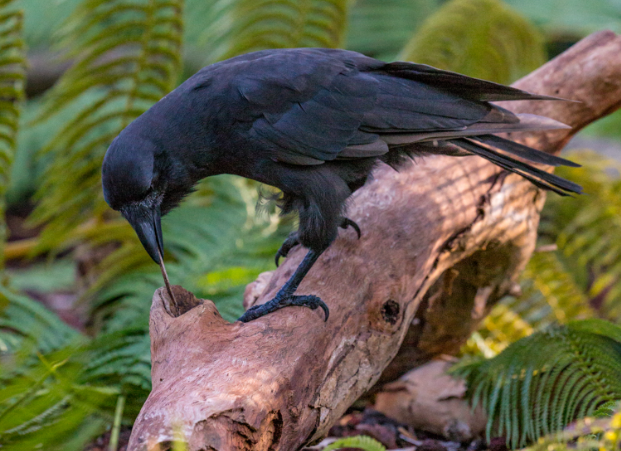 The crows were able to use and modify twigs to get at pieces of meat in holes. Ken Bohn/San Diego Zoo Global