The Laser Interferometer Gravitational-Wave Observatory (LIGO) in the United States has detected gravitational waves for the first time. This is one of the most important astrophysical observations since the discovery of the Cosmic Microwave Background.

“We have detected gravitational waves. We did it!” said David Reitze, Executive Director of the LIGO Laboratory at the California Institute of Technology, at a press conference announcing the discovery

Gravitational waves are a prediction of Einstein’s Theory of General Relativity. According to Einstein, gravity bends space-time, and the more massive an object is, the larger the effect. When massive objects move they create an oscillation in space-time, gravitational waves, a bit like the waves that form in front of a moving ship.

The gravitational waves were observed on September 14, 2015, and they were produced by a pair of merging black holes, one of the few events thought powerful enough to produce gravitational waves that we can detect. The two objects are about 150 kilometers (95 miles) across and merged 1.3 billion years ago. They had similar masses, one weighing 36 times the mass of the Sun and the other 29. The discovery has a statistical significance of 5.1 sigmas, meaning that there’s only 1 chance in almost 6 million that the result is a fluke. The results will be published in the journal Physical Review Letters.

It will bring to a head decades of searching by scientists, who have long sought evidence for gravitational waves. They are thought to move through the universe, squeezing and stretching the fabric of space-time, but the oscillations are incredibly small and thus very difficult to detect, requiring incredibly sensitive instrumentation such as LIGO.

"Detecting and measuring gravitational waves is the holy grail of Einstein’s theory of General Relativity," said Professor Bob Bingham, a physicist at the Science and Technology Facilities Council at Harwell Campus in the U.K. "This discovery leads the way to look back in time at the creation of the universe, with significant repercussions for ongoing astronomical research." 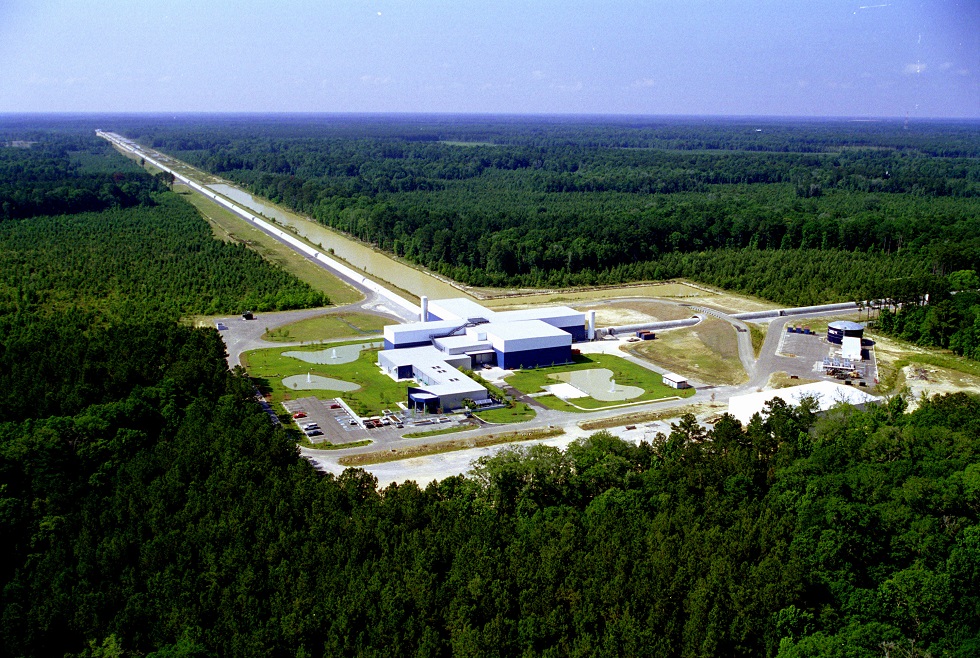 LIGO is made up of two detectors, one in Hanford, Washington and the other in Livingston, Louisiana. Both detectors have a laser system that allows precise measurements of space-time. At each LIGO facility, a laser beam is split into two and sent down two perpendicular tunnels, each 4 kilometers (2.5 miles) long with a mirror at the end. The lasers are reflected and then combined back together. If a gravitational wave crosses one or both lasers, it will change the distance the light had to travel, and the reconstructed beam will look different from the original.

The LIGO teams from the two facilities compared notes to confirm if the observation was real or a fluke, and contacted astronomical observatories to follow up the detection with an observation of the possible cause of the gravitational wave, leading to the suspected merging black holes.

"The long-term goal for the LIGO detectors and its observations is to do astrophysics," Vicky Kalogera,  said. "We want to use the gravitational-wave observations to learn about our universe for decades and centuries to come."

Another important piece of information to have come out of the announcement is that gravitational waves move at the speed of light. This was expected theoretically, but having this proven is important in constructing future theories. And this observation also confirms the first intermediate-mass black holes ever found. Stellar black holes are usually much smaller, reaching at most 15 solar masses. The objects observed are significantly bigger and they are believed to be a remnant of the first stars in the universe. The merger of intermediate mass black holes is thought to eventually produce the supermassive black holes we observe at the center of galaxies.

Later this year, the VIRGO facility (which is similar to LIGO) will re-open in Italy, and combining the data with LIGO will allow for triangulation of the source to find out the location of the black holes. And the LISA Pathfinder mission is currently investigating technologies that will be used on another gravitational wave experiment, the LISA observatory, which will be constructed in outer space to provide further information on this fascinating phenomenon.

The detection of gravitational waves is truly momentous, and heralds a completely new era in astronomy.