Seven billion years ago, a black hole at the center of a distant galaxy emitted a spectacular burst of energy. Astronomers missed their chance to study this event properly as a result of interference from the Moon. Eleven days later, however, a different form of interference gave them another chance, and they took full advantage. It marked the first time such a distant event has been studied using the highest-energy telescopes we possess.

On July 14, 2014, the Large Area Telescope aboard the Fermi satellite picked up signs of an outburst coming from a blazar called QSO B0218+357, a black hole aligned in such a way that the bright jets it sometimes emits are visible from Earth. The event was so significant that gamma-ray telescopes dropped their planned observations and turned their attention to this event.

Unfortunately for the MAGIC telescope on Canary Island, this was just two days after the full Moon. Although the Moon doesn't emit high-energy gamma rays, scattered moonlight does overwhelm its detectors so it can't pick up anything else.

Fortunately, in almost the exact direction of QSO B0218+357, lies a galaxy with the confusingly similar name B0218+357G. Light from the blazar has to pass close enough to B0218+357G to be affected by its gravity. The light from QSO B0218+357 gets split into two beams. Both eventually reach Earth, but one takes a slightly more roundabout route, and therefore arrives slightly later.

Astronomers at MAGIC calculated the rerun would screen 11 days later, and had the telescope, along with several others that work in the lower energy part of the gamma-ray spectrum, all set to go. Given the length of the lunar cycle, moonlight was never going to be an issue this time. The observations have now been reported in Astronomy and Astrophysics.

Even by the standards of gamma-ray telescopes, MAGIC operates at the extremes. The photons it observes carry energies from 25 billion electron volts up to 30 trillion electron volts. The top end is orders of magnitude more energetic than those Fermi sees, and trillions of times the ones our eyes can detect.

For the huge team that took part in observing the QSO B0218+357 outburst and analyzing the data, this was a big step forward. "This was the first time we were able to observe that high-energy photons were deflected by a gravitational lens,” said lead author Dr Julian Sitarek of the University of Lodz, Poland, in a statement.

Moreover, the event represents the furthest we have seen at these wavelengths. High-energy gamma rays are scattered on their path, and until now we have only been able to form images from those within about 4 billion light-years of us. "With the MAGIC observation, the part of the universe that we can observe via gamma rays has doubled,” said co-author Dr Razmik Mirzoyan of the Max Planck Institute for Physics. The observations may affect the design of future high-energy gamma-ray telescopes.

Finally, the fact that the differences in arrival time between the two beams fit so perfectly with astronomers' predictions is significant in itself. The calculations were done using theories that remain unproven, and their success in this case increases the probability they are right. 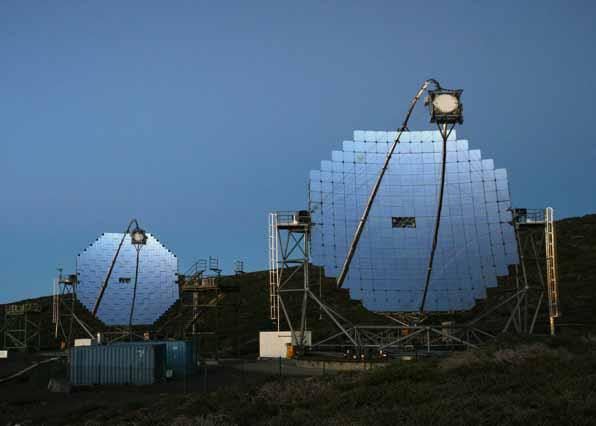 The MAGIC telescopes on Canary Island detect the glow given off when high-energy gamma rays hit the upper atmosphere. Robert Wagner