Gravity surrounds us, penetrates us, and keeps the galaxy together. And under the right conditions, it even produces a stunning spectacle we call a gravitational lens.

The latest example of this phenomenon was a serendipitous discovery that took place not in an observatory but in a classroom. Japanese researchers from the National Astronomical Observatory of Japan were running a summer school analyzing new data from the Hyper Suprime-Cam (HSC) instrument on the Subaru Telescope in Hawaii with students.

The gravitational lens, dubbed Eye of Horus, is created by the near-perfect alignment of three galaxies. The central object is a massive foreground galaxy, whose gravity has bent the surrounding spacetime, magnifying and distorting the light of two more distant galaxies to create a so-called Einstein ring.

"It was my first time to look at the astronomical images taken with Hyper Suprime-Cam and I had no idea what the ring-like galaxy is," Arsha Dezuka, a student who was working on the data, said in a statement. "It was a great surprise for me to learn that it is such a rare, unique system!"

Gravitational lensing allows astronomers to look further back into the universe. In the Eye of Horus, the background galaxies are located 9 and 10.5 billion light-years away, and thanks to the magnification effect, the astronomers were able to identify two clumps in the most distant galaxy – an indication that it might have been caught in a galaxy collision. 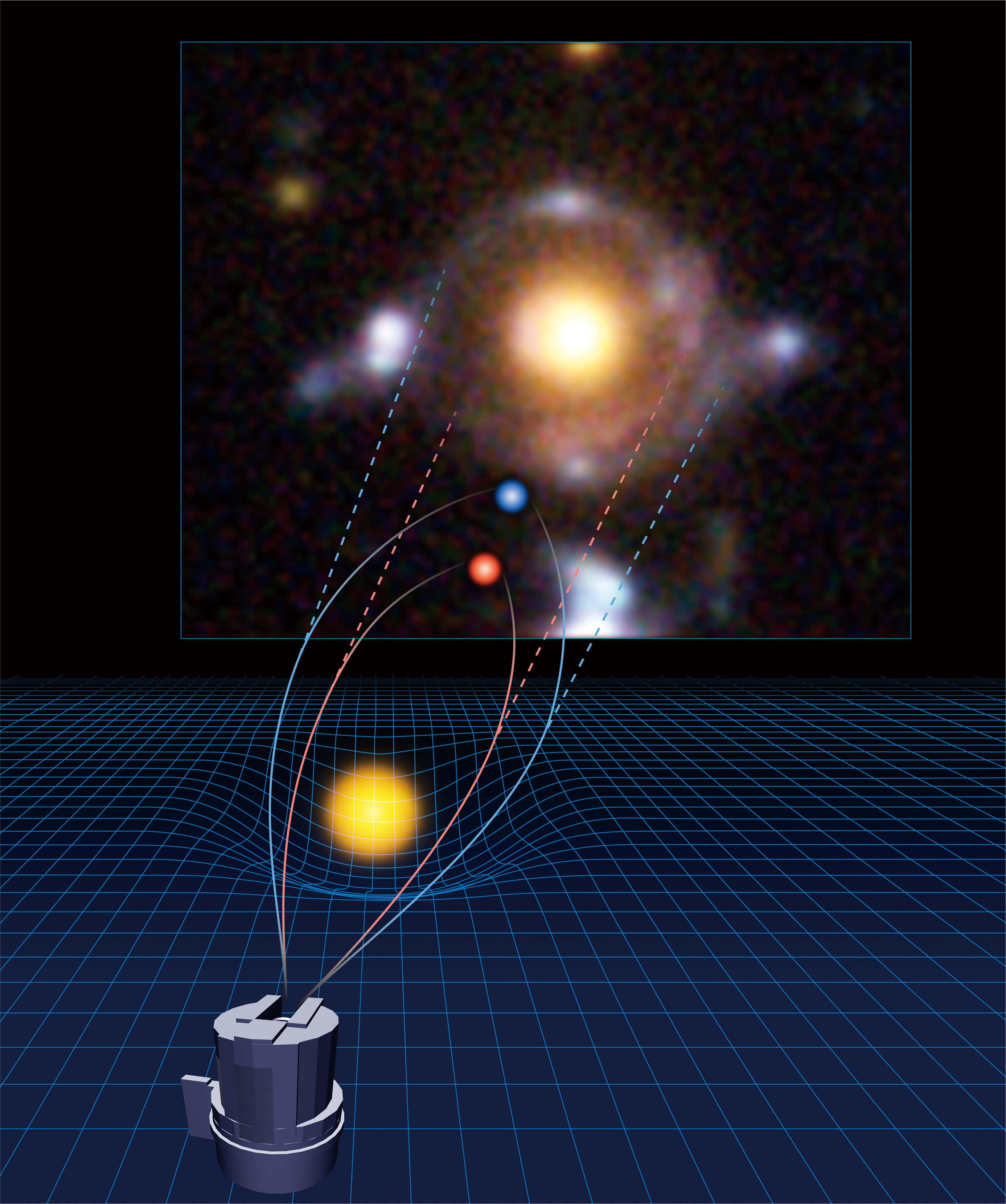 Gravitational lensing can also be used to understand how mass is distributed in the "closer" universe. By studying how light is bent, it is possible to work out how matter is distributed.

The Eye of Horus shows arcs and an Einstein ring, indicating a spherical distribution of matter and great alignment between the three galaxies. But it also shows a dent in it, suggesting that the foreground galaxy has a satellite that is too faint for us to see.

"When I was looking at HSC images with the students, we came across a ring-like galaxy and we immediately recognized it as a strong-lensing signature," said Masayuki Tanaka, the lead author of the paper published in the Astrophysical Journal Letters. "The discovery would not have been possible without the large survey data to find such a rare object, as well as the deep, high-quality images to detect light from distant objects."

The survey with the HSC is only 30 percent complete – it will continue imaging the cosmos for several years to come. The team estimates roughly 10 more of these types of objects will be found by the end of the project, and they will provide important insight on how galaxies have changed and how the universe has expanded over the ages.