A trove of new fossils discovered in Scotland is shedding light on one of the most crucial stages in the evolution of vertebrates on Earth. The collection of bones, including five full fossils, date from the period in which animals with backbones made the move from the oceans to land.

The fossils, reported in the journal Nature Ecology & Evolution, fill a 15-million-year gap at the end of the Devonian, when tetrapods were first starting to evolve. At the end of the epoch, around 360 million years ago, an extinction event killed off many of the archaic fish species at around the time when the newly emerged four-legged critters were rapidly splitting into two groups. One group went on to become the amphibians, while the other was the ancestors of all birds, mammals, and reptiles. 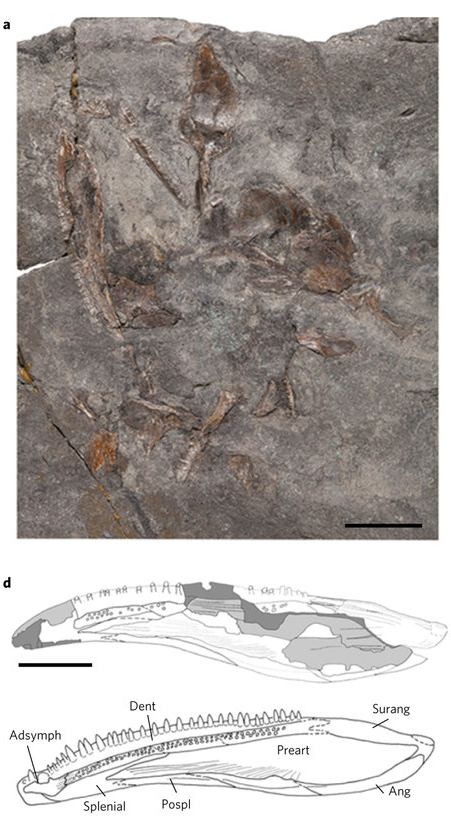 The bones found on the Scotland-England border include the complete fossils of at least five species of early tetrapods from this period. Two of these are thought to have been the amphibian ancestors, while the other three are the predecessors to mammals, birds, and reptiles. They look mostly like small newts or lizards, with the largest skull measuring around 80 millimeters (3.1 inches) long.

They are an important discovery, as they provide insight into what happened to vertebrate life on Earth after the extinction event. It had been postulated, due to the lack of fossil evidence from directly after the event, that the diversity of these creatures suffered, particularly as it was thought that oxygen levels in the atmosphere dropped.

But these new fossils now suggest otherwise. The fact that the fossils discovered represent at least five different species suggest there was a thriving community of tetrapods following the extinction, all of which presumably filled differing ecological niches. But alongside the bones, the researchers also uncovered fossilized charcoal, which suggests that the levels of oxygen in the air were healthy and able to support high levels of plant life.

Evidence of early vertebrates from this period in the fossil record are rare, with only a handful of sites turning up bones. This could be because there have not been enough studies looking for them, or it could suggest that this region in Scotland, and the corresponding geological rock layer in Nova Scotia, represent the place where four-legged animals first took to land.

Image in text: One of the newly discovered species (Diploradus?austiumensis gen. et sp. nov.), including an illustration of its jaw bone. Clack et al. 2016