Almost all galaxies in the universe are thought to have grown by swallowing gas from their surroundings, known as accretion, and using it to fuel star formation. But evidence for this process had not been seen in the early universe – until now.

An international team of astronomers used the Atacama Large Millimeter Array (ALMA) in Chile to study a distant galaxy, dubbed BDF 3299, just 750 million years after the Big Bang. In the vicinity of the galaxy, they found a large cloud of gas about 1,000 light-years across that is thought to be feeding the galaxy through accretion. Never before had this process been observed in the first billion years of the universe.

“This is the earliest evidence for this process taking place,” lead researcher Roberto Maiolino from the University of Cambridge told IFLScience. “It is the first time it has been seen in such a primordial galaxy."

While some galaxies can also grow by merging with other galaxies, it was theorized that accretion was the primary process. Today we see evidence for accretion in the Milky Way and many other modern galaxies, but observing it in the universe's earliest galaxies had proved difficult.

This makes BDF 3299 hugely important, then, in proving this theory. The off-center glow of the galaxy’s center in the image is thought to be the result of intense radiation from newly formed stars from the gas. Without incoming gas, galaxies will eventually stop forming stars and die.

The discovery could help reveal how the universe was cleaned of its “fog” of hydrogen gas in its first few hundred million years. Known as the epoch of reionization, it's thought that stars, quasars and galaxies swept this fog away, giving us the universe we see today. 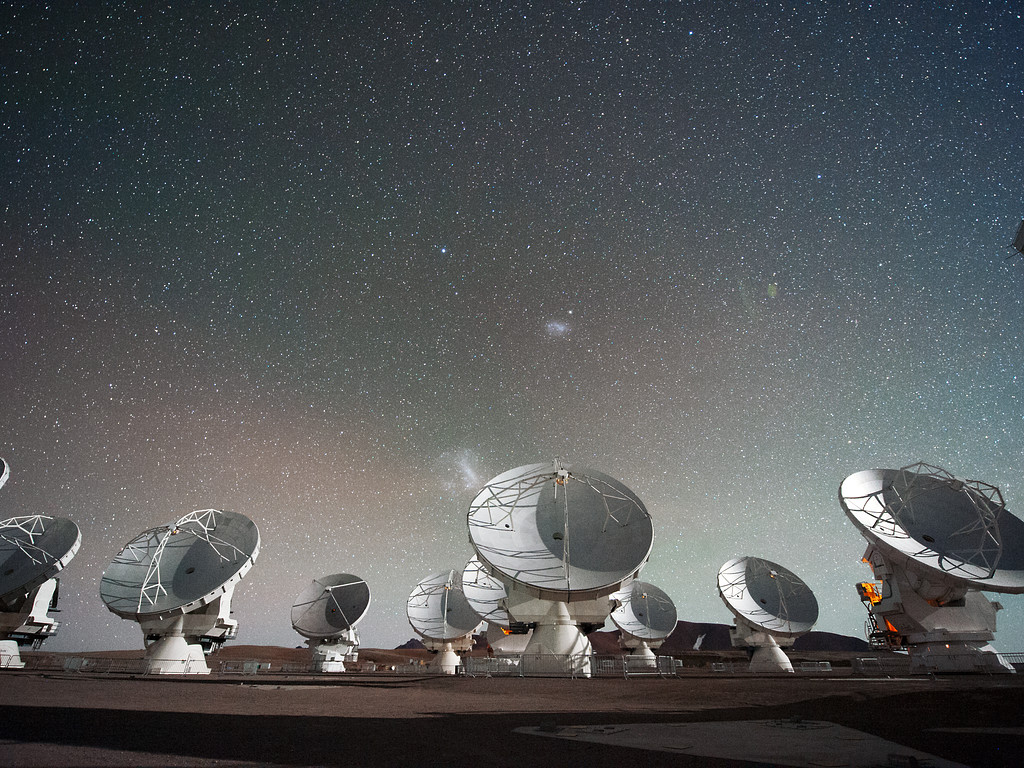 ALMA is composed of 66 radio telescopes that work together to observe the universe. ESO/C. Malin.

“We have been trying to understand the interstellar medium and the formation of the reionization sources for many years,” said co-author of the study Andrea Ferrara from Scuola Normale Superiore in Pisa, Italy, in a statement. “Finally to be able to test predictions and hypotheses on real data from ALMA is an exciting moment and opens up a new set of questions. This type of observation will clarify many of the thorny problems we have with the formation of the first stars and galaxies in the universe.”

The astronomers note that they aren’t sure how big this specific galaxy will grow, nor what type of galaxy it will turn into. Maiolino said that it may “evolve into a massive galaxy like the Milky Way” or one even more massive, or it may stop forming stars at some point.

ALMA is still being brought up to full power, and Maiolino added that as the capability of ALMA increases, it will be possible to study primordial galaxies like this in greater detail and learn even more about the early universe.