Ancient Mars was an active world with rainfall, volcanos, and rivers. The water shaped the environment dramatically, and when it disappeared, it left its scars on the surface of Mars. Scars that we keep finding today.

Mars Express, an ESA (European Space Agency) probe, took a closer look at one of these “scarred” regions and discovered strong evidence of one or more ancient floods. The clue comes from the Worcester Crater, which is located near the mouth of a complex water system known as Kasei Valles.

Astronomers think that a mix of volcanism, tectonics, and ground collapse might have triggered massive floods around 3.6 to 3.4 billion years ago. The signs of these floods may be written in stone.

Last May, Mars Express provided a detailed new look at this region, which allowed astronomers to notice something unusual: Worcester Crater is strongly eroded on one side, but not the other. The 25-kilometer-wide (15.5 miles) impact basin has a peculiar stepped topography, which has been seen as an indication of strong variation in the water levels over time. 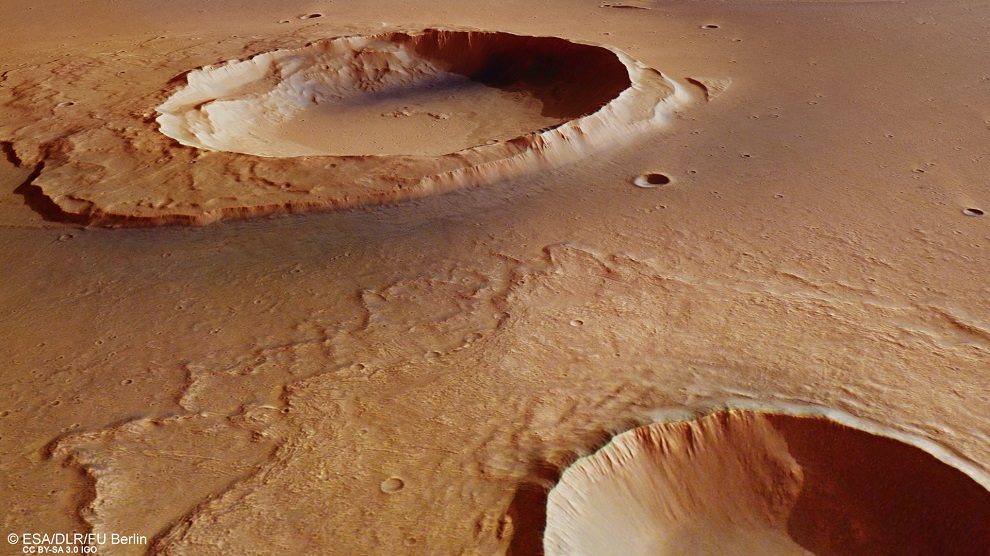 The debris blanket and the rampart created by the floods are clearly visible in this 3D reconstruction. ESA/DLR/FU Berlin

Things are different at a nearby crater, which doesn’t sport any major erosion features. This suggests that the meteor hit after the flooding had stopped. The smaller crater might not tell us about the floods, but it does show us what the plain was like afterward.

The shape of the debris blanket around the smaller crater, with its “splash-like” layers, suggests that when the impact happened, the plain was still rich in water or at least in water-ice.

Other craters in the picture also contribute to the story. The one found on the raised plateau north of Worcester Crater is not as deep as the other two. There are also smaller ones dotted around the valley that are significantly more recent, with lighter tails stretching southeast due to wind erosion.

Topological view of the region, the Worcester crater, and its unnamed companions. ESA/DLR/FU Berlin

The Kasei Valles connects the Echus Chasma, east of the volcanic Tharsis region, to the Chryse Planitia – a large plain in the northern hemisphere. Chrysie Planitia is also connected to the Valles Marineris, a 9,000-kilometer (5,600 miles) canyon – another important Martian waterway. While the region is now a dry, cold desert, billions of years ago it might have been a wide sea.