ESA has revealed new details about what they think happened to their Mars lander and, well, it doesn’t sound too good at the moment.

To recap, the Schiaparelli Entry, Descent and Landing Demonstrator Module (EDM) was supposed to land on Mars yesterday, part of the broader ExoMars mission. Its primary goal was to test landing capabilities for an upcoming rover in 2021.

However, it failed to send a radio signal back to Earth to say it had landed safely on the surface, leaving its fate uncertain. It was, though, able to send 600 megabytes of telemetry data while it was descending to its parent spacecraft, the Trace Gas Orbiter (TGO), which successfully entered orbit around Mars yesterday.

In a press conference this morning, ESA revealed findings from this data. The landing was supposed to occur in stages, with Schiaparelli passing through the atmosphere, then deploying a parachute, and finally using thrusters to gently land on the ground.

According to the data, though, it appears something went wrong during or after the parachute phase. For starters, the parachute appears to have been jettisoned too early. The spacecraft was then supposed to fire its thrusters for 30 seconds on its approach to the ground, but they only fired for 3 to 4 seconds.

“The time was much shorter than we were expecting,” Andrea Accomazzo, ESA Spacecraft Operations Manager, said at the press conference. 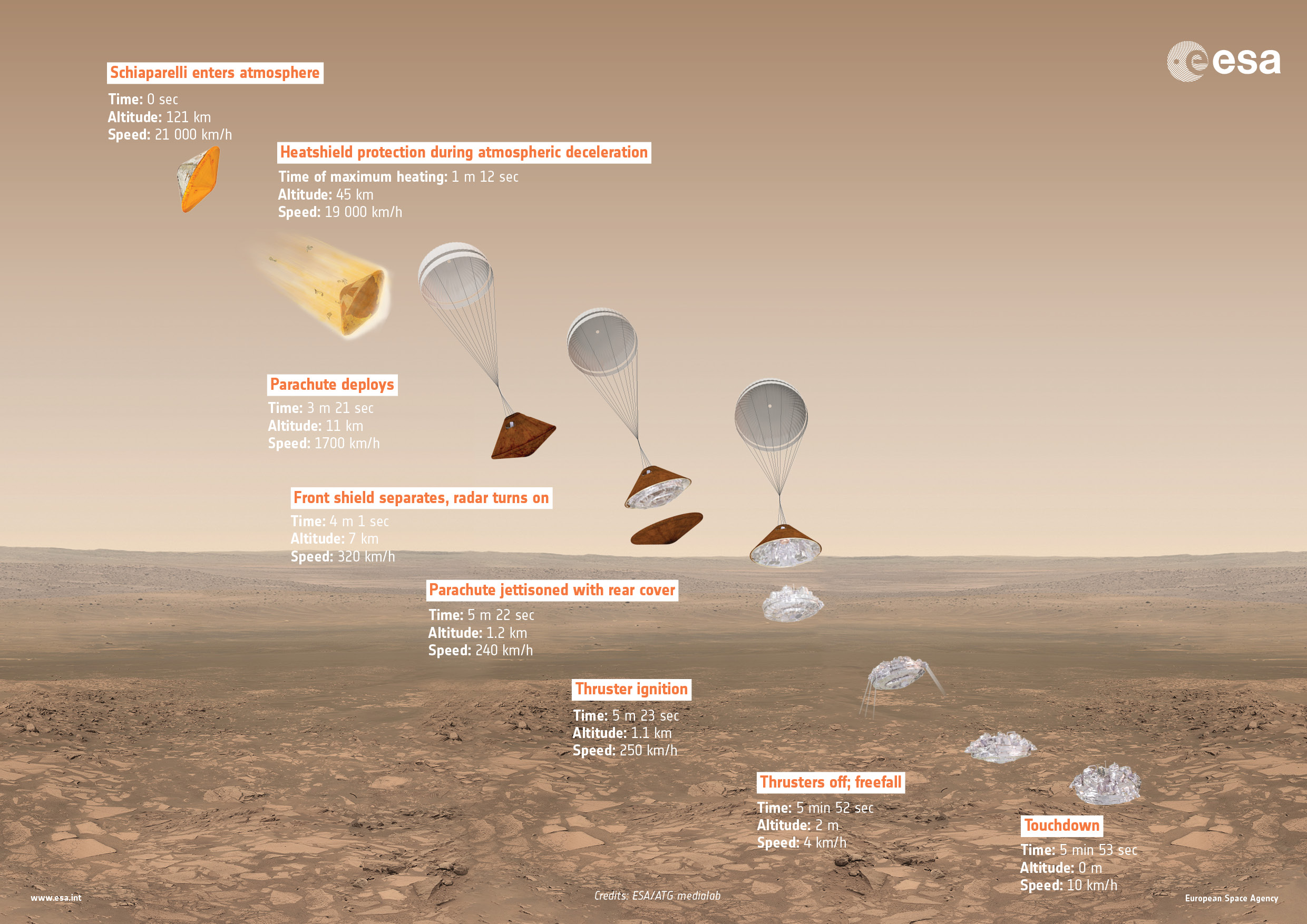 This was how the landing was supposed to play out. ESA/ATG medialab

The signal from the lander was lost about 50 seconds before it was scheduled to touch down, but the lander was still communicating for 19 seconds after its thrusters turned off too early. This would suggest that the lander may have gone into freefall and crash landed.

We don’t know for sure at the moment, and ESA has said they will be continuing to analyze data over the next few days. It may be weeks before we have a clear picture of what happened.

But Schiaparelli only has enough battery power to last at most 12 Martian days (40 minutes longer than an Earth day). Repeated attempts are going to be made to contact it on the surface, but right now, it doesn’t look too good.

On the plus side, with the TGO in orbit, ESA can now begin the preliminary stages of the ExoMars mission, studying methane in the Martian atmosphere. TGO will also serve as a relay satellite for the rover in 2021, although with this test landing looking like a failure, the chances of that rover landing being successful will likely be scrutinized.

This attempted landing highlights how hard missions to Mars are. More than half have failed, including ESA’s Beagle 2 lander in 2003. Whether Schiaparelli will also be given that unwanted accolade remains to be seen.