We’re pretty sure that Saturn’s moon Enceladus has a vast ocean of water under its icy surface. The only problem is, it’s quite hard to access.

A new study published in Nature Astronomy might make things a bit easier. Using microwave data from the Cassini spacecraft, scientists led by the University of Versailles Saint-Quentin (UVSQ) in France have found that the south pole is warmer than expected, suggesting the water here is not so far down.

At most regions on Enceladus, the icy shell is thought to be about 18 to 22 kilometers (11 to 14 miles) thick. At the south pole though, previous research suggested it was as little as 5 kilometers (3 miles) thick. This latest study refines that, and suggests the ocean begins just 2 kilometers (1.2 miles) under the surface.

"These observations provide a unique insight into what is going on beneath the surface,” lead author Alice Le Gall from UVSQ said in a statement. “They show that the first few meters below the surface of the area that we investigated, although at a glacial 50 to 60 K [Kelvin], are much warmer than we had expected: likely up to 20 K warmer in some places.”

At its south pole, Enceladus is ejecting water-rich jets, which have been observed and studied by Cassini on several occasions. They burst out of “tiger stripes” on the surface, fractures in the icy sheet caused by the ocean. Cassini discovered the jets were salty in composition, suggesting the ocean might be interacting with the rocky core of Enceladus. 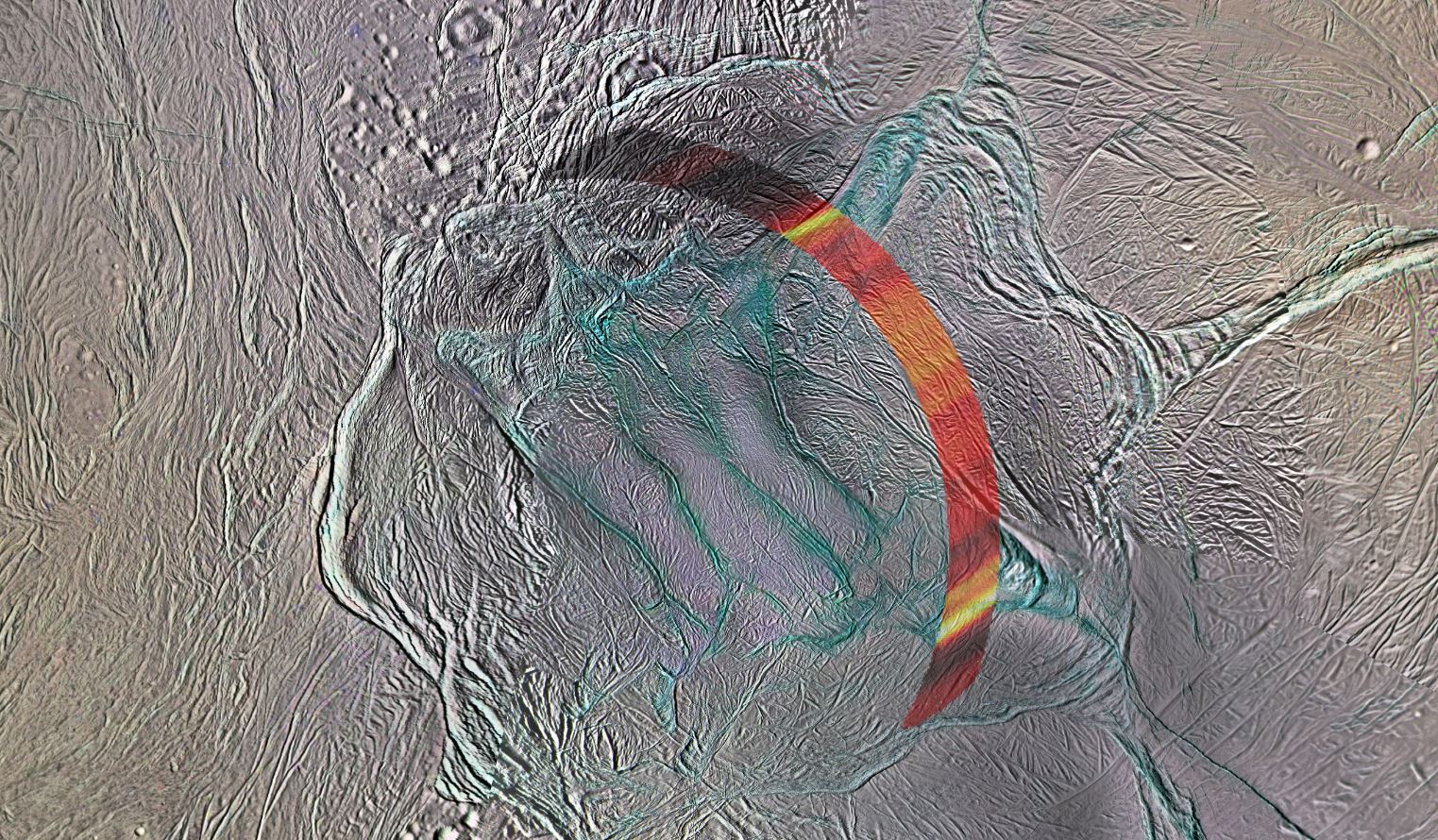 The south pole of Enceladus. The arc shape was the region observed by Cassini. NASA/JPL-Caltech/Space Science Institute/A. Lucas

Enceladus is heated by the Sun’s rays and those of Saturn too, but it was also thought the push and pull of Saturn may play a part. This latest study seems to affirm those suggestions, Le Gall told IFLScience, with the thinner crust at the south pole being particularly susceptible to this tidal heating effect.

Cassini’s mission around Saturn is coming to an end in September this year, with no more close flybys of Enceladus planned (the last was in 2015). But proposals are being considered for future missions, including NASA’s Enceladus Life Finder, which could launch in the 2020s. It would study the jets at the south pole from orbit, hopefully telling us if the ocean is habitable.

Could we actually drill below the surface? Well, that’s a bit more tricky. The deepest hole drilled on Earth is the Kola Superdeep Borehole in Russia, which reached a depth of 12 kilometers (7.5 miles), although replicating this on Enceladus would be difficult.

But another idea is that a lander could use a drill to melt through the ice. Whether we can get far enough into the crust to sample the ocean is another question, but this study suggests it may be a bit easier than thought.

Keep All Your Gear Charged With This Wireless Charging Station

Keep All Your Gear Charged With This Wireless Charging Station