A study of how echidnas respond to fires has revealed a previously unknown capacity, one that may explain how mammals survived the global catastrophe that wiped out the dinosaurs.

Echidnas may look like oversized hedgehogs with an ant-eater's nose, but both their spines and mouthparts are examples of convergent evolution. They are actually monotremes, along with the platypus, the last surviving egg laying mammals. As such, they provide some insight into our distant ancestors.

The research group of Professor Fritz Geiser of the University of New England, Australia, studied what happened when an area of echidna habitat south-east of Perth was deliberately burned as part of an environmental regeneration project. GPS devices indicated the short-beaked echidnas (Tachyglossus aculeatus) probably retreated into thick logs that only burn in the most intense blazes.

However, it is what the echidnas did after the fire that was most interesting. ”All but one study animal survived the fire in the prescribed burn area and echidnas remained inactive during the day(s) following the fire and substantially reduced body temperature during bouts of torpor,” Geiser and his co-authors reported in Proceedings of the Royal Society B. 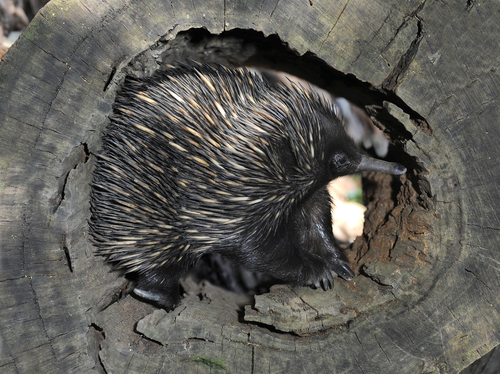 I'm not coming out and you can't make me. Worldswildlifewonders/Shutterstock

The period after a fire can be a sparse one for the insects echidnas feed on. Moreover, Geiser told IFLScience that predators are often attracted to fires by the loss of prey-protecting foliage. (Indeed, predatory birds may even encourage the fire's spread.)

The echidnas lowered their body temperature and metabolism to reduce the need for food. The process was similar to hibernation, but instead of having months to prepare, the echidnas were able to turn their metabolism down almost without warning. Echidnas continued to use torpor for weeks after the fire, and remained in thier original, now burned territories. Geiser said the periods in torpor may be one reason echidnas have an exceptionally long lifespan for mammals of their size.

Geiser stressed to IFLScience that this capacity for “opportunistic torpor” is much more important for small mammals than large ones. “Small animals have much more surface area relative to their volume, so they lose heat much faster,” Geiser said. Consequently, they can only last a few days under normal conditions without food, and need to drastically lower their body temperatures if they are to survive prolonged periods of deprivation.

“Short-beaked echidnas are among the largest known deep hibernators,” the paper notes. Large species, such as bears, usually engage in a more limited reduction, lowering their body temperature by five degrees, rather than twenty or thirty, when they want to reduce energy use during winter.

If the small ancestral mammals that scuttled at the feet of dinosaurs had a similar capacity to begin torpor at will it might explain how they survived the long period of limited food and sunlight that followed the formation of the Chicxulub crater. “Many mammals would have died,” Geiser told IFLScience, but "only a few need to make it for the species to survive.”