Scientists have found evidence that many of the meteorites that are rare on Earth today may once have been common, suggesting our Solar System is more unstable than thought. The findings are published in Nature Astronomy.

About 466 million years ago, a large asteroid about 150 kilometers (93 miles) across was hit by a smaller asteroid about a tenth the size in the Solar System. The resultant debris is responsible for a third of all the 50,000 known meteorites on Earth, known as L chondrites.

This latest paper, for the first time, paints a picture of what sort of meteorites were hitting Earth before that event. It suggests that a type called primitive achondrites, which today make up just 0.45 percent of Earth’s meteorites, once made up 34 percent of all space rocks on Earth.

“Looking at the kinds of meteorites that have fallen to Earth in the last hundred million years doesn’t give you a full picture,” said the paper’s lead author, Philipp Heck of The Field Museum in Chicago, in a statement. “It would be like looking outside on a snowy winter day and concluding that every day is snowy, even though it’s not snowy in the summer.” 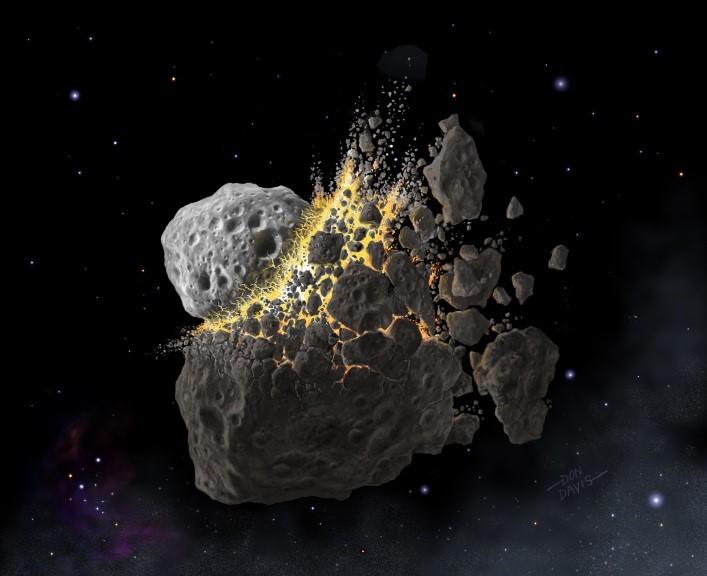 Artist's impression of the space collision 466 million years ago that produced many of today's meteorites. Don Davis/Southwest Research Institute

Unfortunately, we don’t have many meteorites that fell to Earth more than 466 million years ago. So to come to their conclusion, the researchers instead looked at micrometeorites, tiny space rocks less than 2 millimeters in diameter, which are more widespread.

They found these on an ancient seafloor exposed in a section of the Lynna River near St Petersburg in Russia. Microscopic chromite crystals from the micrometeoroids had survived for hundreds of millions of years. The researchers separated them from the surrounding rock by dissolving them in acid.

As mentioned, many of these turned out to be primitive achondrites. Some of these originated from the Moon and Mars, while others may have come from the protoplanet Vesta in the asteroid belt, which was hit by a large body more than a billion years ago.

“We knew almost nothing about the meteorite flux [population] to Earth in geological deep time before this study,” co-author Birger Schmitz of Sweden’s Lund University said in the statement. “The conventional view is that the Solar System has been very stable over the past 500 million years. So it is quite surprising that the meteorite flux at 467 million years ago was so different from the present.”

The research helps paint a rather fascinating history of our Solar System, showing that it is a continuously diverse and active place. Further research could help shine a light on the different collisions that have shaped its history.